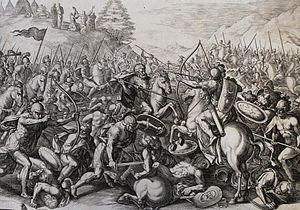 Amalek (/ˈæməlɛk/;[1] Hebrew: עֲמָלֵק‎, ‘Ámālēq, Arabic: عماليق‎ ‘Amālīq) is a nation described in the Hebrew Bible as an enemy of the Israelites. The name "Amalek" can refer to the nation's founder, a grandson of Esau; his descendants, the Amalekites; or the territories of Amalek which they inhabited.

In some rabbinical interpretations, Amalek is etymologised as am lak, "a people who lick (blood),"[2] but most specialists regard the origin to be unknown.[3]

Amalekites in the Hebrew Bible

According to the Bible, Amalek was the son of Eliphaz (himself the son of Esau, ancestor of the Edomites) and Eliphaz's concubine Timna. Timna was a Horite and sister of Lotan.[4] Amalek is described as the "chief of Amalek" among the "chiefs of the sons of Esau",[5] from which it is surmised that he ruled a clan or territory named after him.

The Amalekites (/ˈæməlɛkaɪts/[6]) were considered to be Amalek's descendants through the genealogy of Esau.[7] In the oracle of Balaam, Amalek was called the 'first of the nations'.[8] One modern scholar believes this attests to Amalek's high antiquity,[9] while traditional commentator Rashi states: "He came before all of them to make war with Israel".[10] First-century Roman-Jewish scholar and historian Flavius Josephus refers to Amalek as a 'bastard' (νόθος) in a derogatory sense.[11] 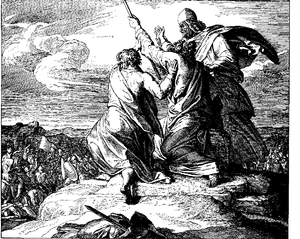 According to the Bible, the Amalekites inhabited the Negev.[12] They appear to have lived a nomadic or seminomadic lifestyle along the fringes of southern Canaan's agricultural zone.[13] This is probably based on the association of this tribal group with the steppe region of ancient Israel and the area of Kadesh (Genesis 14:7).

As a people, the Amalekites were identified as a recurrent enemy of the Israelites.[7] This role appears in several stories:

Gustave Doré, The Death of Agag. "Agag" may have been the hereditary name of the Amalekite kings. The one depicted was killed by Samuel (1 Samuel 15).

In Genesis 14:7, the "field of the Amalekites" is mentioned, though the person Amalek had not yet been born.

Some commentators explain this as a reference to the territory which was later on inhabited by the Amalekites.[19] C. Knight elaborates this concept by making a comparison: one might say "Caesar went into France", though Gaul only later became known as France.[20]

Alternatively, during the Islamic Golden Age, certain Arabic writings claimed that the Amalekites existed long before Abraham.[21] Some Muslim historians claimed that the Amalekites who fought Joshua were descendants of the inhabitants of North Africa. Ibn-Arabshâh purported that Amalek was a descendant of Ham, son of Noah.[20][21] It is, however, possible that the name Amalek may have been given to two different nations. The Arabians mention Imlik, Amalik, or Ameleka among the aborigines of Arabia, the remains of which were mingled with the descendants of Qahtan (Joktan) and Adnan and became Mostarabs or Mocarabes, that is, Arabians mixed with foreigners.[20]

By the 19th century, there was strong support by Western theologians for the idea that the nation of Amalek could have flourished before the time of Abraham. Matthew George Easton advocated that the Amalekites were not descendants of Amalek by taking a literal approach to Genesis 14:7.[22] However, the modern biblical scholar David Freedman uses textual analysis to glean that the use of Amalekite in Genesis 14:7 is actually an anachronism,[13] and in the early 19th century, Richard Watson enumerated several speculative reasons for having a "more ancient Amalek" than Abraham.[21]

In the exegesis of Numbers 24:20 concerning Balaam's utterance: "Amalek was the first one of the nations, but his end afterward will be even his perishing", Richard Watson attempts to associate this passage to the "first one of the nations" that developed post-Flood.[21] According to Samuel Cox, the Amalekites were the "first" in their hostility toward the Israelites.[23]

Although Egyptian and Assyrian monumental inscriptions and records of the period survive which list various tribes and peoples of the area, no reference has ever been found to Amalek or the Amalekites. Therefore, the archaeologist and historian Hugo Winckler suggested in 1895 that there were never any such people and the Biblical stories concerning them are entirely mythological and ahistorical.[24] While considerable knowledge about nomadic Arabs has been recovered through archeological research, no specific artifacts or sites have been linked to Amalek with any certainty.[13] However, it is possible that some of the fortified settlements in the Negev highlands and even Tel Masos (near Beer-sheba) have Amalek connections.[25]

"Davidster" (Star of David) by Dick Stins is a Holocaust memorial in The Hague. The text at the side (in Dutch and Hebrew) is from Deuteronomy 25:17, 19 – "Remember what Amalek has done to you ... do not forget."

According to a midrash, Amalek's mother Timna was a princess who had tried to convert to Judaism but had been rejected by Abraham, Isaac and Jacob. She replied she would rather be a handmaiden to the dregs of this nation than be the mistress of another Nation; to punish the Patriarchs for the affront they had made her, she was made the mother of Amalek which would cause Israel much distress.[26][27]

According to the Midrash, the Amalekites were sorcerers who could transform themselves to resemble animals, in order to avoid capture. Thus, in 1 Samuel 15:3, it was considered necessary to destroy the livestock in order to destroy Amalek.[28]

Nur Masalha, Elliot Horowitz, and Josef Stern suggest that Amalekites have come to represent an "eternally irreconcilable enemy" that wants to murder Jews, that Jews in post-biblical times sometimes associate contemporary enemies with Haman or Amalekites, and that some Jews believe that pre-emptive violence is acceptable against such enemies.[29] Groups identified with Amalek include the Romans, Nazis, Stalinists, ISIS and bellicose Iranian leaders such as Mahmoud Ahmadinejad.[30][31]

More metaphorically, to some Hasidic rabbis (particularly the Baal Shem Tov), Amalek represents atheism or the rejection of God.

During the Purim festival, the Book of Esther is read in the commemoration of the saving of the Jewish people from Haman (considered to be an Amalekite) who leads a plot to kill the Jews. On the basis of Exodus 17:14, where the Lord promised to "blot out the name" of Amalek, it is customary for the audience to make noise and shout whenever "Haman" is mentioned, in order to desecrate his name. It is customary to recite Deuteronomy 25:17–18 (see below) on the Shabbat before Purim.[32]

Commandment to exterminate the Amalekites

From man unto woman, from infant unto suckling, from ox unto sheep, so that the name of Amalek not be mentioned even with reference to an animal by saying "This animal belonged to Amalek".

As enumerated by Maimonides, the three mitzvot state:

600 Deut. 25:19 – Not to forget Amalek's atrocities and ambush on our journey from Egypt in the desert</poem>

Some commentators have discussed the ethical deficiency of the commandment to exterminate all the Amalekites, especially including the command to kill children, and the presumption of collective punishment.[33][34][35][36] It has also been described as genocidal, according to genocide scholars like Norman Naimark.[37][38][39][40]

The commandment to kill Amalekites is not practiced by contemporary Jews, based on the argument that Sennacherib deported and mixed the nations, so it is no longer possible to determine who is an Amalekite. For example, Rabbi Hayim Palaggi stated:

We can rely on the maxim that in ancient times, Sennacherib confused the lineage of many nations.[41]

In addition, many rabbinic authorities ruled that the commandment only applies to a Jewish king or an organized community, and cannot be performed by an individual.[42] According to Haggahot Maimuniyyot, the commandment applies only in the future messianic era and not in present times; this limitation is almost a consensus among medieval authorities.[43]

Maimonides explains that the commandment to destroy the nation of Amalek requires the Jewish people to peacefully request that they accept upon themselves the Seven Laws of Noah and pay a tax to the Jewish kingdom. Only if they refuse must they be physically killed.[44]

In addition, the Amalekites, as a physical nation, have been extinct since the time of Hezekiah's reign, according to the Hebrew Bible.[45]

Theologian Charles Ellicott explains that the Amalekites were subject to cherem in the Book of Samuel for the purposes of incapacitation, due to their 'accursed' nature and the threat they posed to the commonwealth of surrounding nations.[49]John Gill also describes the cherem as an example of the law of retaliation being carried out.[50]

Rabbi Elyahu Kin explains white people in Europe are Amalek, or "The Whole Roman Empire", and that killing a European baby is "fulfilling a Mitzvah". [51]