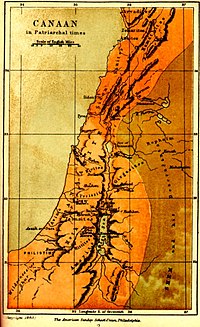 The land of Canaan, which comprises the modern regions of Israel, Palestine, Lebanon, Jordan and Syria. At the time when Canaanite religion was practiced, Canaan was divided into various city-states.

Canaanite religion refers to the group of ancient Semitic religions practiced by the Canaanites living in the ancient Levant from at least the early Bronze Age through the first centuries of the Common Era. Canaanite religion was polytheistic, and in some cases monolatristic. 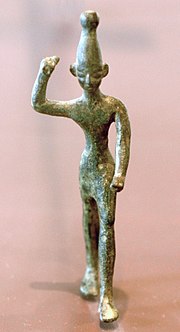 A great number of deities in a four-tier hierarchy headed by El and Asherah[1][2] were worshiped by the followers of the Canaanite religion; this is a detailed listing:[3]

Afterlife beliefs and cult of the dead

Canaanites believed that following physical death, the npš (usually translated as "soul") departed from the body to the land of Mot (Death). Bodies were buried with grave goods, and offerings of food and drink were made to the dead to ensure that they would not trouble the living. Dead relatives were venerated and sometimes asked for help.[26][27]

None of the inscribed tablets found in 1929 in the Canaanite city of Ugarit (destroyed c. 1200 BCE) has revealed a cosmology. Any idea of one is often reconstructed from the much later Phoenician text by Philo of Byblos (c. 64–141 CE), after much Greek and Roman influence in the region.

According to the pantheon, known in Ugarit as 'ilhm (Elohim) or the children of El, supposedly obtained by Philo of Byblos from Sanchuniathon of Berythus (Beirut) the creator was known as Elion, who was the father of the divinities, and in the Greek sources he was married to Beruth (Beirut = the city). This marriage of the divinity with the city would seem to have Biblical parallels too with the stories of the link between Melqart and Tyre; Chemosh and Moab; Tanit and Baal Hammon in Carthage, Yah and Jerusalem.

The union of El Elyon and his consort Asherah would be representation of primordial Cronos and Rhea in Greek mythology, or Roman Saturnus and Ops.

In Canaanite mythology there were twin mountains Targhizizi and Tharumagi which hold the firmament up above the earth-circling ocean, thereby bounding the earth. W. F. Albright, for example, says that El Shaddai is a derivation of a Semitic stem that appears in the Akkadian shadû ("mountain") and shaddā'û or shaddû'a ("mountain-dweller"), one of the names of Amurru. Philo of Byblos states that Atlas was one of the Elohim, which would clearly fit into the story of El Shaddai as "God of the Mountain(s)". Harriet Lutzky has presented evidence that Shaddai was an attribute of a Semitic goddess, linking the epithet with Hebrew šad "breast" as "the one of the Breast". The idea of two mountains being associated here as the breasts of the Earth, fits into the Canaanite mythology quite well. The ideas of pairs of mountains seem to be quite common in Canaanite mythology (similar to Horeb and Sinai in the Bible). The late period of this cosmology makes it difficult to tell what influences (Roman, Greek, or Hebrew) may have informed Philo's writings.

In the Baal Cycle, Ba'al Hadad is challenged by and defeats Yam, using two magical weapons (called "Driver" and "Chaser") made for him by Kothar-wa-Khasis. Afterward, with the help of Athirat and Anat, Ba'al persuades El to allow him a palace. El approves, and the palace is built by Kothar-wa-Khasis. After the palace is constructed, Ba'al gives forth a thunderous roar out of the palace window and challenges Mot. Mot enters through the window and swallows Ba'al, sending him to the Underworld. With no one to give rain, there is a terrible drought in Ba'al's absence. The other deities, especially El and Anat, are distraught that Ba'al has been taken to the Underworld. Anat goes to the Underworld, attacks Mot with a knife, grinds him up into pieces, and scatters him far and wide. With Mot defeated, Ba'al is able to return and refresh the Earth with rain.[28]

Archaeological investigations at the site of Tell es-Safi have found the remains of donkeys, as well as some sheep and goats in Early Bronze Age layers, dating to 4,900 years ago which were imported from Egypt in order to be sacrificed. One of the sacrificial animals, a complete donkey, was found beneath the foundations of a building, leading to speculation this was a 'foundation deposit' placed before the building of a residential house.[29]

It is considered virtually impossible to reconstruct a clear picture of Canaanite religious practices. Although child sacrifice was known to surrounding peoples, there is no reference to it in ancient Phoenician or Classical texts. The biblical representation of Canaanite religion is always negative.[30]

Canaanite religious practice had a high regard for the duty of children to care for their parents, with sons being held responsible for burying them, and arranging for the maintenance of their tombs.[31]

Canaanite deities such as Baal were represented by figures which were placed in shrines often on hilltops, or 'high places' surrounded by groves of trees, such as is condemned in the Hebrew Bible, in Hosea (v 13a) which would probably hold the Asherah pole, and standing stones or pillars.[32]

The Levant region was inhabited by people who themselves referred to the land as 'ca-na-na-um' as early as the mid-third millennium BCE.[33] There are a number of possible etymologies for the word.

The Akkadian word "kinahhu" referred to the purple-colored wool, dyed from the Murex molluscs of the coast, which was throughout history a key export of the region. When the Greeks later traded with the Canaanites, this meaning of the word seems to have predominated as they called the Canaanites the Phoenikes or "Phoenicians", which may derive from the Greek word "Phoenix" meaning crimson or purple, and again described the cloth for which the Greeks also traded. The Romans transcribed "phoenix" to "poenus", thus calling the descendants of the Canaanite settlers in Carthage "Punic".

Thus while "Phoenician" and "Canaanite" refer to the same culture, archaeologists and historians commonly refer to the Bronze Age, pre-1200 BCE Levantines as Canaanites; and their Iron Age descendants, particularly those living on the coast, as Phoenicians. More recently, the term Canaanite has been used for the secondary Iron Age states of the interior (including the Philistines and the states of Israel and Judah)[34][35] that were not ruled by Arameans—a separate and closely related ethnic group.[36] The DNA of the modern Jewish people matches the DNA of the ancient Canaanites. [37]

Canaanite religion was strongly influenced by their more powerful and populous neighbors, and shows clear influence of Mesopotamian and Egyptian religious practices. Like other people of the Ancient Near East Canaanite religious beliefs were polytheistic, with families typically focusing on veneration of the dead in the form of household gods and goddesses, the Elohim, while acknowledging the existence of other deities such as Baal and El, Mot, Qos, Asherah and Astarte. Kings also played an important religious role and in certain ceremonies, such as the hieros gamos of the New Year, may have been revered as gods. "At the center of Canaanite religion was royal concern for religious and political legitimacy and the imposition of a divinely ordained legal structure, as well as peasant emphasis on fertility of the crops, flocks, and humans."[38][39]

Canaanite religion was influenced by its peripheral position, intermediary between Egypt and Mesopotamia, whose religions had a growing impact upon Canaanite religion. For example, during the Hyksos period, when chariot-mounted maryannu ruled in Egypt, at their capital city of Avaris, Baal became associated with the Egyptian god Set, and was considered identical – particularly with Set in his form as Sutekh. Iconographically henceforth, Baal was shown wearing the crown of Lower Egypt and shown in the Egyptian-like stance, one foot set before the other. Similarly Athirat (known by her later Hebrew name Asherah), Athtart (known by her later Greek name Astarte), and Anat henceforth were portrayed wearing Hathor-like Egyptian wigs.

From the other direction, Jean Bottéro has suggested that Ya of Ebla (a possible precursor of Yam) was equated with the Mesopotamian god Ea during the Akkadian Empire. In the Middle and Late Bronze Age, there are also strong Hurrian and Mitannite influences upon the Canaanite religion. The Hurrian goddess Hebat was worshiped in Jerusalem, and Baal was closely considered equivalent to the Hurrian storm god Teshub and the Hittite storm god, Tarhunt. Canaanite divinities seem to have been almost identical in form and function to the neighboring Arameans to the east, and Baal Hadad and El can be distinguished amongst earlier Amorites, who at the end of the Early Bronze Age invaded Mesopotamia.

The ruins of the excavated city of Ras Shamra, or Ugarit

Until Claude F. A. Schaefer began excavating in 1929 at Ras Shamra in Northern Syria (the site historically known as Ugarit), and the discovery of its Bronze Age archive of clay tablets written in an alphabetical cuneiform,[42] modern scholars knew little about Canaanite religion, as few records have survived. Papyrus seems to have been the preferred writing medium, but whereas in Egypt papyrus may survive centuries in the extremely dry climate, Canaanite records have simply decayed in the humid Mediterranean climate.[43] As a result, the accounts contained within the Bible represented almost the only sources of information on ancient Canaanite religion. This record was supplemented by a few secondary and tertiary Greek sources: (Lucian's De Dea Syria (The Syrian Goddess), fragments of the Phoenician History of Philo of Byblos (died 141 CE), and the writings of Damascius). More recently, detailed study of the Ugaritic material, of other inscriptions from the Levant and also of the Ebla archive from Tel Mardikh, excavated in 1960 by a joint Italo-Syrian team, have cast more light on the early Canaanite religion.[43][44]

According to The Encyclopedia of Religion, the Ugarit texts represent one part of a larger religion that was based on the religious teachings of Babylon. The Canaanite scribes who produced the Baal texts were also trained to write in Babylonian cuneiform, including Sumerian and Akkadian texts of every genre.[45]

Archaeological excavations in the last few decades have unearthed more about the religion of the ancient Canaanites.[36] The excavation of the city of Ras Shamra (1928 onwards) and the discovery of its Bronze Age archive of clay-tablet alphabetic cuneiform texts provided a wealth of new information. Detailed study of the Ugaritic material, of other inscriptions from the Levant and also of the Ebla archive from Tel Mardikh, excavated in 1960 by a joint Italo-Syrian team, have cast more light on the early Canaanite religion.[citation needed]