Template:Infobox royal house The Argead dynasty (Greek: Ἀργεάδαι, Argeádai) was an ancient Macedonian royal house of Dorian Greek provenance.[1][2][3] They were the founders and the ruling dynasty of the kingdom of Macedon from about 700 to 310 BC.[4]

Their tradition, as described in ancient Greek historiography, traced their origins to Argos, of Peloponnese in Southern Greece, hence the name Argeads or Argives.[5][6][1] Initially the rulers of the tribe of the same name,[7] by the time of Philip II they had expanded their reign further, to include under the rule of Macedonia all Upper Macedonian states. The family's most celebrated members were Philip II of Macedon and his son Alexander the Great, under whose leadership the kingdom of Macedonia gradually gained predominance throughout Greece, defeated the Achaemenid Empire and expanded as far as Egypt and India. The mythical founder of the Argead dynasty is King Caranus.[8][9]

Triobol of Argos (top), and a bronze coin of King Amyntas II of Macedon (bottom). The early Argead kings often copied the wolf of Argos' coins on their own coinage to highlight their supposed ancestry from this city.[10]

The words Argead and Argive derive (via Latin Argīvus[11]) from the Greek Ἀργεῖος (Argeios meaning "of or from Argos"[12]), which is first attested in Homer where it was also used as a collective designation for the Greeks ("Ἀργείων Δαναῶν", Argive Danaans).[13][14] The Argead dynasty claimed descent from the Temenids of Argos, in the Peloponnese, whose legendary ancestor was Temenus, the great-great-grandson of Heracles.[1]

In the excavations of the royal palace at Aegae, Manolis Andronikos discovered in the "tholos" room (according to some scholars "tholos" was the throne room) a Greek inscription relating to that belief.[15] This is testified by Herodotus, in The Histories, where he mentions that three brothers of the lineage of Temenus, Gauanes, Aeropus and Perdiccas, fled from Argos to the Illyrians and then to Upper Macedonia, to a town called Lebaea, where they served the king. The latter asked them to leave his territory, believing in an omen that something great would happen to Perdiccas. The boys went to another part of Macedonia, near the garden of Midas, above which mount Bermio stands. There they made their abode and slowly formed their own kingdom.[16] 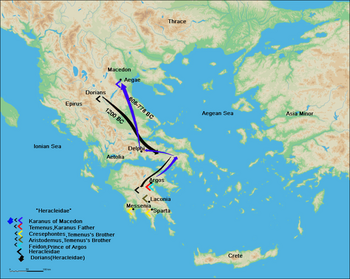 The route of the Argeads from Argos, Peloponnese, to Macedonia according to Herodotus.

Another theory supported by modern scholars, following the ancient author Appian, is that the Argead dynasty actually descended from Argos Orestikon in Macedonia, and that the Macedonian kings claimed a descent from Argos in Peloponnese to enforce their Greekness.[18]

According to Thucydides, in the History of the Peloponnesian War, the Argeads were originally Temenids from Argos, who descended from the highlands to Lower Macedonia, expelled the Pierians from Pieria and acquired in Paionia a narrow strip along the river Axios extending to Pella and the sea. They also added Mygdonia in their territory through the expulsion of the Edoni, Eordians, and Almopians.[19]

The death of the king almost invariably triggered dynastic disputes and often a war of succession between members of the Argead family, leading to political and economic instability.[20] These included:

Additionally, long-established monarchs could still face a rebellion by a relative when the former's kingship was perceived to be weak. An example was Philip's rebellion against his older brother, king Perdiccas II, in the prelude to the Peloponnesian War (433–431 BCE).