In approximately 701 BCE, Sennacherib, king of Assyria, attacked the fortified cities of the Kingdom of Judah in a campaign of subjugation. Sennacherib besieged Jerusalem, but failed to capture it — it is the only city mentioned as being besieged on Sennacherib's Stele, of which the capture is not mentioned.

In 721 BCE, the Assyrian army captured the Israelite capital at Samaria and carried away the citizens of the northern Kingdom of Israel into captivity. The virtual destruction of Israel left the southern kingdom, Judah, to fend for itself among warring Near-Eastern kingdoms. After the fall of the northern kingdom, the kings of Judah tried to extend their influence and protection to those inhabitants who had not been exiled. They also sought to extend their authority northward into areas previously controlled by the Israeli kingdom. The latter part of the reigns of King Ahaz and King Hezekiah were periods of stability during which Judah was able to consolidate both politically and economically. Although Judah was a vassal of Assyria during this time and paid an annual tribute to the powerful empire, it was the most important state between Assyria and Egypt.[1]

When Hezekiah became king of Judah, he initiated widespread religious changes, including the breaking of religious idols. He re-captured Philistine-occupied lands in the Negev desert, formed alliances with Ashkelon and Egypt, and made a stand against Assyria by refusing to pay tribute.[2] In response, Sennacherib attacked Judah, laying siege to Jerusalem.

Sources from both sides claimed victory, the Judahites (or Biblical author(s)) in the Tanakh, and Sennacherib in his prism. Sennacherib claimed the siege and capture of many Judaean cities, but only the siege—not capture—of Jerusalem. 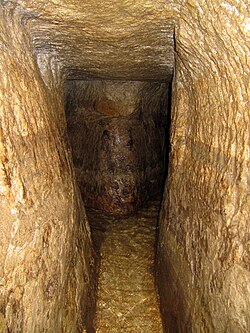 The story of the Assyrian siege is told in the Biblical books of Isaiah (7th century BCE), Second Kings (mid-6th century BCE) and Chronicles (c. 350–300 BCE). As the Assyrians began their invasion, King Hezekiah began preparations to protect Jerusalem. In an effort to deprive the Assyrians of water, springs outside the city were blocked. Workers then dug a 533-meter tunnel to the Spring of Gihon, providing the city with fresh water. Additional siege preparations included fortification of the existing walls, construction of towers, and the erection of a new reinforcing wall. Hezekiah gathered the citizens in the square and encouraged them by reminding them that the Assyrians possessed only "an arm of flesh", but the Judeans had the protection of Yahweh.

According to 2 Kings 18, while Sennacherib was besieging Lachish, he received a message from Hezekiah offering to pay tribute in exchange for Assyrian withdrawal. According to the Hebrew Bible, Hezekiah paid 300 talents of silver and 30 talents of gold to Assyria—a price so heavy that he was forced to empty the temple and royal treasury of silver and strip the gold from the doorposts of Solomon's temple. Nevertheless, Sennacherib marched on Jerusalem with a large army. When the Assyrian force arrived, its field commander Rabshakeh brought a message from Sennacherib. In an attempt to demoralize the Judeans, the field commander announced to the people on the city walls that Hezekiah was deceiving them, and that Yahweh could not deliver Jerusalem from the king of Assyria. He listed the gods of other peoples defeated by Sennacherib then asked, "Who of all the gods of these countries has been able to save his land from me?"

During the siege, Hezekiah dressed in sackcloth (a sign of mourning), but the prophet Isaiah assured him that the city would be delivered and Sennacherib would fail.[1] Overnight, an angel killed 185,000 Assyrian troops.[2] Some scholars believe this number has been transcribed incorrectly, with one study suggesting the number was originally 5,180.[3]

Sennacherib's Prism, which details the events of Sennacherib's campaign against Judah, was discovered in the ruins of Nineveh in 1830, and is now stored at the Oriental Institute in Chicago, Illinois.[2] The account dates from about 690 BCE. The text of the prism boasts how Sennacherib destroyed 46 of Judah's cities and trapped Hezekiah in Jerusalem "like a caged bird." The text goes on to describe how the "terrifying splendor" of the Assyrian army caused the Arabs and mercenaries reinforcing the city to desert. It adds that the Assyrian king returned to Assyria where he later received a large tribute from Judah. This description inevitably varies somewhat from the Jewish version in the Tanakh. The massive Assyrian casualties mentioned in the Tanakh are not mentioned in the Assyrian version.

After he besieged Jerusalem, Sennacherib was able to give the surrounding towns to Assyrian vassal rulers in Ekron, Gaza and Ashdod. His army still existed when he conducted campaigns in 702 BCE and from 699 BCE until 697 BCE, when he made several campaigns in the mountains east of Assyria, during one of which he received tribute from the Medes. In 696 BCE and 695 BCE, he sent expeditions into Anatolia, where several vassals had rebelled following the death of Sargon II. Around 690 BCE, he campaigned in the northern Arabian deserts, conquering Dumat al-Jandal, where the queen of the Arabs had taken refuge.[4]

Herodotus wrote that the Assyrian army was overrun by mice when attacking Egypt.[5] Some Biblical scholars take this to an allusion that the Assyrian army suffered the effects of a mouse- or rat-borne disease such as bubonic plague.[3][6] Even without relying on that explanation, John Bright suggested it was an epidemic of some kind that saved Jerusalem.[3]

In What If?, a collection of essays on counterfactual history, historian Willian H. McNeill speculates that the accounts of mass death among the Assyrian army in the Tanakh might be explained by an outbreak of cholera (or other water-borne diseases) due to the springs beyond the city walls having been blocked, thus depriving the besieging force of a safe water supply.

Henry T. Aubin writes in The Rescue of Jerusalem: The Alliance Between Hebrews and Africans in 701 B.C. that the Assyrian army was routed by an Egyptian army under Kushite (Nubian) command.

Willian H. McNeill's What If? essay speculates that the retreat served to support Judaism's then-new monotheistic tradition. McNeill reasons that the Assyrian siege of Jerusalem holds special historical significance due to the newness (at the time) of the monotheistic tradition in Judaism. McNeill argues that the apparent defeat of Sennacherib by YHWH supported the idea of monotheism in an age when a conquered people typically adopted the god or gods of their conquerors, as their own had failed to protect them. The extraordinary defeat of Sennacherib which McNeill suggests, by disease which was as yet not understood, would have proven YHWH superior to the gods of the most powerful nation then known to the Jews, Assyria. McNeill concludes that if Sennacherib had taken the city, the Jews may have adopted polytheism, and consequently, the Abrahamic religions would not exist.

An 1813 poem by Lord Byron, The Destruction of Sennacherib, commemorates Sennacherib's campaign in Judea from the Hebrew point of view. Written in anapestic tetrameter, the poem was popular in school recitations.