From Biblical History & Civilization
Jump to navigation Jump to search
For other uses, see Barak (name) and Barak (disambiguation).
Not to be confused with Barack. 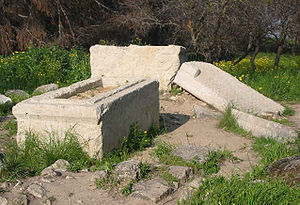 Grave near Tel Kadesh attributed to Barak or Deborah

Barak (/ˈbɛəræk/ or /ˈbɛərək/;[1] Hebrew: בָּרָק‎, Tiberian Hebrew: Bārāq, Arabic: البُراق‎ al-Burāq "lightning") was a ruler of Ancient Israel. As military commander in the biblical Book of Judges, Barak, with Deborah, from the Tribe of Ephraim, the prophet and fourth Judge of pre-monarchic Israel, defeated the Canaanite armies led by Sisera.

The son of Abinoam from Kedesh in Naphtali, Barak's mother was from the Tribe of Benjamin.[2] His story is told in the Book of Judges, Chapters 4 and 5.

The story of the Hebrews' defeat of the Canaanites led by Sisera, under the prophetic leadership of Deborah and the military leadership of Barak, is related in prose (Judges Chapter 4) and repeated in poetry (Chapter 5, which is known as the Song of Deborah).

Deborah summoned Barak, the son of Abinoam, from his home at Kedesh in Naphtali, and ordered him, in the name of YHWH, to take ten thousand men to Mount Tabor. He agreed to on condition that Deborah should go with him. Here he was attacked, as Deborah had expected, by Sisera, whose forces were put to flight, and the greater part of them were slain by Barak's army.[3]

Because Barak would not go to battle without Deborah, in turn she prophesied that[4] the honor of victory would not go to him, but rather to a woman (Judges 4:9). Barak asked Deborah to go with him because of her connection with God. Some Scholars see this as Barak being spineless while others might see Barak making a smart decision[4] since Deborah was seen as a mediator between God and humans.[5] Most authorities believe this passage refers to Jael's killing of Sisera in her tent following the battle,[6][7][8][9] while others believe this refers to Deborah herself.[3]

Defeat and death of Sisera

Jael shows the slain Sisera to Barak, by James Tissot.

In the battle at Mount Tabor, a cloudburst occurred, causing the river to flood, thus limiting the maneuverability of the Canaanite chariots. Sisera fled, seeking refuge in the tent of a Kenite woman, Jael. Jael gave a drink of milk to Sisera, who fell asleep from weariness, then killed him by pounding a tent peg through his head. When Barak arrived, she showed him Sisera, dead in her tent.

Barak ברק means lightning in Hebrew. Barcas, the surname of the famous Hamilcar Barca, is the Punic equivalent of the name.[3]

The Epistle to the Hebrews 11:32-34 praises Barak's faith which gave him victory.