The Book of Amos is the third of the Twelve Minor Prophets in the Tanakh/Old Testament and the second in the Greek Septuagint tradition.[1] Amos, an older contemporary of Hosea and Isaiah,[2] was active c. 750 BC during the reign of Jeroboam II[2] (788–747 BC),[3] making Amos the first prophetic book of the Bible to be written. Amos lived in the kingdom of Judah but preached in the northern kingdom of Israel.[2] His major themes of God's omnipotence and divine judgment became staples of prophecy.[2] 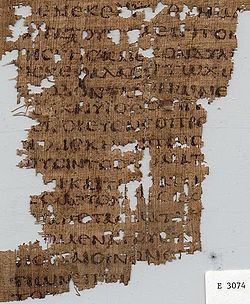 The book opens with a historical note about the prophet, then a short oracle announcing Yahweh's judgment (repeated in the Book of Joel).[4] The prophet denounces the crimes committed by the gentile (non-Jewish) nations, tells Israel that even they have sinned and are guilty of the same crimes, and report five symbolic visions prophesying the destruction of Israel.[5] Included in this, with no apparent order, are an oracle on the nature of prophecy, snippets of hymns, oracles of woe, a third-person prose narrative concerning the prophet, and an oracle promising restoration of the House of David, which had not yet fallen in the lifetime of Amos.[4]

Amos prophesied during the reign of Jeroboam II, King of Israel, and of Uzziah of Judah, which places him in the first half of the 8th century BC. According to the book's superscription (Amos 1:1) he was from Tekoa, a town in Judah south of Jerusalem, but his prophetic mission was in the northern kingdom. He is called a "shepherd" and a "dresser of sycamore trees", but the book's literary qualities suggest a man of education rather than a poor farmer.[6]

Scholars have long recognized that Amos utilized an ancient hymn within his prophecy, verses of which are found at 4.13; 5.8–9; 8.8; 9.5–6.[7] This hymn is best understood as praising YHWH for his judgment, demonstrated in his destructive power, rather than praise for creation.[8] Scholarship has also identified 'Sumerian City Lament' (SCL) motifs within Amos and particularly the hymn, offering the possibility that Amos used SCL as a literary template for his prophecy of Jerusalem's destruction.[9] The Amos hymn has also been discussed in terms of a 'covenant curse' which was used to warn Israel of the consequences of breaking the covenant, and in particular a 'Flood covenant-curse' motif, first identified by D.R. Hillers.[10] Recent scholarship has shown Amos's hymn is an ancient narrative text, has identified a new verse at 7.4; and has compared the hymn to the Genesis Flood account and Job 9:5–10.[11]

The central idea of the book of Amos is that God puts his people on the same level as the surrounding nations – God expects the same purity of them all. As it is with all nations that rise up against the kingdom of God, even Israel and Judah will not be exempt from the judgment of God because of their idolatry and unjust ways. The nation that represents YHWH must be made pure of anything or anyone that profanes the name of God. God's name must be exalted.

Online translations of Book of Amos: