Chapters 1–30 of the book consist of three sermons or speeches delivered to the Israelites by Moses on the plains of Moab, shortly before they enter the Promised Land. The first sermon recounts the forty years of wilderness wanderings which had led to that moment, and ends with an exhortation to observe the law (or teachings), later referred to as the Law of Moses. The second sermon reminds the Israelites of the need to follow Yahweh and the laws (or teachings) he has given them, on which their possession of the land depends. And the third sermon offers the comfort that, even should Israel prove unfaithful and so lose the land, with repentance all can be restored.[2]

The final four chapters (31–34) contain the Song of Moses, the Blessing of Moses, and the narratives recounting the passing of the mantle of leadership from Moses to Joshua and, finally, the death of Moses on Mount Nebo.

One of its most significant verses is Deuteronomy 6:4, the Shema Yisrael, which has become the definitive statement of Jewish identity: "Hear, O Israel: the LORD our God, the LORD is one."[3] Verses 6:4–5 were also quoted by Jesus in Mark 12:28–34 as part of the Great Commandment.

Patrick D. Miller in his commentary on Deuteronomy suggests that different views of the structure of the book will lead to different views on what it is about.[4] The structure is often described as a series of three speeches or sermons (chapters 1:1–4:43, 4:44–29:1, 29:2–30:20) followed by a number of short appendices[5] – Miller refers to this as the "literary" structure; alternatively, it is sometimes seen as a ring-structure with a central core (chapters 12–26, the Deuteronomic Code) and an inner and an outer frame (chapters 4–11/27–30 and 1–3/31–34)[5] – Miller calls this the covenantal substructure;[4] and finally the theological structure revealed in the theme of the exclusive worship of Yahweh established in the first of the Ten Commandments ("Thou shalt have no other god before me") and the Shema.[4] 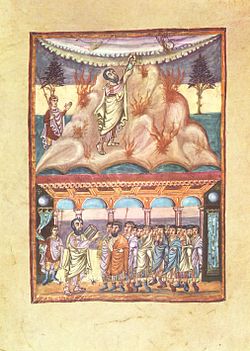 (The following "literary" outline of Deuteronomy is from John Van Seters;[6] it can be contrasted with Alexander Rofé's "covenantal" analysis in his Deuteronomy: Issues and Interpretation.[7])

The final verses, Deuteronomy 34:10–12, "never again did there arise in Israel a prophet like Moses," make a claim for the authoritative Deuteronomistic view of theology and its insistence that the worship of the Hebrew God as the sole deity of Israel was the only permissible religion, having been sealed by the greatest of prophets.[8]

Deuteronomy 12–26, the Deuteronomic Code, is the oldest part of the book and the core around which the rest developed.[9] It is a series of mitzvot (commands) to the Israelites regarding how they ought to conduct themselves in Canaan, the land promised by Yahweh, God of Israel. The following list organizes most of the laws into thematic groups: 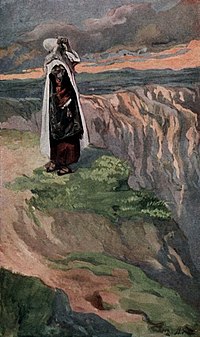 The prophet Isaiah, active in Jerusalem about a century before Josiah, makes no mention of the Exodus, covenants with God, or disobedience to God's laws; in contrast Isaiah's contemporary Hosea, active in the northern kingdom of Israel, makes frequent reference to the Exodus, the wilderness wanderings, a covenant, the danger of foreign gods and the need to worship Yahweh alone; this has led scholars to the view that these traditions behind Deuteronomy have a northern origin.[48] Whether the Deuteronomic code – the set of laws at chapters 12–26 which form the original core of the book – was written in Josiah's time (late 7th century) or earlier is subject to debate, but many of the individual laws are older than the collection itself.[49] The two poems at chapters 32–33 – the Song of Moses and the Blessing of Moses were probably originally independent.[48]

Position in the Hebrew Bible

Deuteronomy occupies a puzzling position in the Bible, linking the story of the Israelites' wanderings in the wilderness to the story of their history in Canaan without quite belonging totally to either. The wilderness story could end quite easily with Numbers, and the story of Joshua's conquests could exist without it, at least at the level of the plot; but in both cases there would be a thematic (theological) element missing. Scholars have given various answers to the problem. The Deuteronomistic history theory is currently the most popular (Deuteronomy was originally just the law code and covenant, written to cement the religious reforms of Josiah, and later expanded to stand as the introduction to the full history); but there is an older theory which sees Deuteronomy as belonging to Numbers, and Joshua as a sort of supplement to it. This idea still has supporters, but the mainstream understanding is that Deuteronomy, after becoming the introduction to the history, was later detached from it and included with Genesis–Exodus–Leviticus–Numbers because it already had Moses as its central character. According to this hypothesis, the death of Moses was originally the ending of Numbers, and was simply moved from there to the end of Deuteronomy.[50]

Deuteronomy stresses the uniqueness of God, the need for drastic centralisation of worship, and a concern for the position of the poor and disadvantaged.[51] Its many themes can be organised around the three poles of Israel, Israel's God, and the covenant which binds them together.

The themes of Deuteronomy in relation to Israel are election, faithfulness, obedience, and God's promise of blessings, all expressed through the covenant: "obedience is not primarily a duty imposed by one party on another, but an expression of covenantal relationship."[52] Yahweh has chosen ("elected") Israel as his special property (Deuteronomy 7:6 and elsewhere),[53] and Moses stresses to the Israelites the need for obedience to God and covenant, and the consequences of unfaithfulness and disobedience.[54] Yet the first several chapters of Deuteronomy are a long retelling of Israel's past disobedience – but also God's gracious care, leading to a long call to Israel to choose life over death and blessing over curse (chapters 7–11).

Deuteronomy's concept of God changed over time. The earliest 7th century layer is monolatrous, not denying the reality of other gods but enforcing the worship of Yahweh in Jerusalem alone. In the later, Exilic layers from the mid-6th century, especially chapter 4, this becomes monotheism, the idea that only one god exists.[55] God is simultaneously present in the Temple and in heaven – an important and innovative concept called "name theology."[56]

After the review of Israel's history in chapters 1 to 4, there is a restatement of the Ten Commandments in chapter 5. This arrangement of material highlights God's sovereign relationship with Israel prior to the giving of establishment of the Law.[57]

The core of Deuteronomy is the covenant that binds Yahweh and Israel by oaths of fidelity (Yahweh and Israel each faithful to the other) and obedience (Israel obedient to Yahweh).[58] God will give Israel blessings of the land, fertility, and prosperity so long as Israel is faithful to God's teaching; disobedience will lead to curses and punishment.[59] But, according to the Deuteronomists, Israel's prime sin is lack of faith, apostasy: contrary to the first and fundamental commandment ("Thou shalt have no other gods before me") the people have entered into relations with other gods.[60]

The covenant is based on seventh-century Assyrian suzerain-vassal treaties by which the Great King (the Assyrian suzerain) regulated relationships with lesser rulers; Deuteronomy is thus making the claim that Yahweh, not the Assyrian monarch, is the Great King to whom Israel owes loyalty.[61] The terms of the treaty are that Israel holds the land from Yahweh, but Israel's tenancy of the land is conditional on keeping the covenant, which in turn necessitates tempered rule by state and village leaders who keep the covenant: "These beliefs", says Norman Gottwald, "dubbed biblical Yahwism, are widely recognised in biblical scholarship as enshrined in Deuteronomy and the Deuteronomistic History (Joshua through Kings)."[62]

Dillard and Longman in their Introduction to the Old Testament stress the living nature of the covenant between Yahweh and Israel as a nation: The people of Israel are addressed by Moses as a unity, and their allegiance to the covenant is not one of obeisance, but comes out of a pre-existing relationship between God and Israel, established with Abraham and attested to by the Exodus event, so that the laws of Deuteronomy set the nation of Israel apart, signaling the unique status of the Jewish nation.[63] The land is God's gift to Israel, and many of the laws, festivals and instructions in Deuteronomy are given in the light of Israel's occupation of the land. Dillard and Longman note that "In 131 of the 167 times the verb "give" occurs in the book, the subject of the action is Yahweh."[64] Deuteronomy makes the Torah the ultimate authority for Israel, one to which even the king is subject.[65]

Judaism's weekly Torah portions in the Book of Deuteronomy

Influence on Judaism and Christianity

Deuteronomy 6:4–5: "Hear, O Israel (shema Yisra'el), the LORD is our God, the LORD is one!" has become the basic credo of Judaism, the Shema Yisrael, and its twice-daily recitation is a mitzvah (religious commandment). It continues, "Thou shalt love the LORD thy God with all thy heart and all thy soul and all thy might"; it has therefore also become identified with the central Jewish concept of the love of God, and the rewards that come as a result.

In the Gospel of Matthew, Jesus cited Deuteronomy 6:5 as a Great Commandment. The earliest Christian authors interpreted Deuteronomy's prophecy of the restoration of Israel as having been fulfilled (or superseded) in Jesus Christ and the establishment of the Christian Church (Luke 1–2, Acts 2–5), and Jesus was interpreted to be the "one (i.e., prophet) like me" predicted by Moses in Deuteronomy 18:15 (Acts 3:22–23). While the exact position of Paul the Apostle and Judaism is still debated, a common view is that in place of the elaborate code of laws (mitzvah) set out in Deuteronomy, Paul the Apostle, drawing on Deuteronomy 30:11–14, claimed that the keeping of the Mosaic covenant was superseded by faith in Jesus and the gospel (the New Covenant).[66]