From Biblical History & Civilization
Jump to navigation Jump to search
For a summary of conflicting names for related books, see Esdras.
Book of the BibleTemplate:SHORTDESC:Book of the Bible

The Book of Ezra is a book of the Hebrew Bible; which formerly included the Book of Nehemiah in a single book, commonly distinguished in scholarship as Ezra–Nehemiah. The two became separated with the first printed rabbinic bibles of the early 16th century, following late medieval Latin Christian tradition.[1] Composed in Hebrew and Aramaic, its subject is the Return to Zion following the close of the Babylonian captivity, and it is divided into two parts, the first telling the story of the first return of exiles in the first year of Cyrus the Great (538 BC) and the completion and dedication of the new Temple in Jerusalem in the sixth year of Darius I (515 BC), the second telling of the subsequent mission of Ezra to Jerusalem and his struggle to purify the Jews from marriage with non-Jews. Together with the Book of Nehemiah, it represents the final chapter in the historical narrative of the Hebrew Bible.[2]

Ezra is written to fit a schematic pattern in which the God of Israel inspires a king of Persia to commission a leader from the Jewish community to carry out a mission; three successive leaders carry out three such missions, the first rebuilding the Temple, the second purifying the Jewish community, and the third sealing the holy city itself behind a wall. (This last mission, that of Nehemiah, is not part of the Book of Ezra.) The theological program of the book explains the many problems its chronological structure presents.[3] It probably appeared in its earliest version around 399 BC, and continued to be revised and edited for several centuries before being accepted as scriptural in the early Christian era.[4]

Chapters 1–6 (documents included in the text in italics) 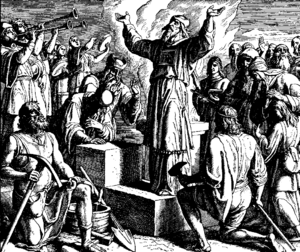 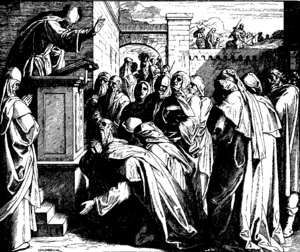 In the early 6th century BC, the Kingdom of Judah rebelled against the Neo-Babylonian Empire and was destroyed. As a result, the royal court, the priests, the prophets and scribes were taken into captivity in the city of Babylon. There a profound intellectual revolution took place, the exiles blaming their fate on disobedience to their God and looking forward to a future when he would allow a purified people to return to Jerusalem and rebuild the Temple in Jerusalem. The same period saw the rapid rise of Persia, previously an unimportant kingdom in present-day southern Iran, to a position of great power, and in 539 BC Cyrus II, the Persian ruler, conquered Babylon.[6]

It is difficult to describe the parties and politics of Judea in this period because of the lack of historical sources, but there seem to have been three important groups involved: the returnees from the exile who claimed the reconstruction with the support of Cyrus II; "the adversaries of Judah and Benjamin"; and a third group, "people of the land", who seem to be local opposition against the returnees building the Temple in Jerusalem.

The following table is a guide to major events in the region during the period covered by the Book of Ezra:

Template:Books of Ketuvim The single Hebrew book Ezra–Nehemiah, with title "Ezra", was translated into Greek around the middle of the 2nd century BC.[11] The Septuagint calls Esdras B to Ezra–Nehemiah and Esdras A to 1 Esdras respectively; and this usage is noted by the early Christian scholar Origen, who remarked that the Hebrew 'book of Ezra' might then be considered a 'double' book. Jerome, writing in the early 5th century, noted that this duplication had since been adopted by Greek and Latin Christians. Jerome himself rejected the duplication in his Vulgate translation of the Bible into Latin from the Hebrew; and consequently all early Vulgate manuscripts present Ezra-Nehemiah as a single book,.[12] However, from the 9th century onwards, Latin bibles are found that for the first time separate the Ezra and Nehemiah sections of Ezra-Nehemiah as two distinct books, then called the first and second books of Ezra; and this becomes standard in the Paris Bibles of the 13th century. It was not until 1516/17, in the first printed Rabbinic Bible of Daniel Bomberg that the separation was introduced generally in Hebrew Bibles.[13]

1 Esdras, also known as "Esdras α", is an alternate Greek-language version of Ezra. This text has one additional section, the 'Tale of the Three Guardsmen' in the middle of Ezra 4.[14] 1 Esdras (3 Esdras in the Vulgate) was considered apocryphal by Jerome.[15]