The Book of Hosea (Hebrew: סֵפֶר הוֹשֵׁעַ‎, romanized: Sefer Hōšēaʿ) is one of the books of the Old Testament and Hebrew Bible. According to the traditional order, it is the first of the twelve Minor Prophets.

Set around the fall of the Northern Kingdom of Israel, the Book of Hosea denounces the worship of gods other than Yahweh (the God of Israel), metaphorically comparing Israel's abandonment of Yahweh to a woman being unfaithful to her husband. According to the book's narrative, the relationship between Hosea and his unfaithful wife Gomer is comparable to the relationship between Yahweh and his unfaithful people Israel. The eventual reconciliation of Hosea and Gomer is treated as a hopeful metaphor for the eventual reconciliation between Yahweh and Israel.

Dated to c. 760–720 BC, it is one of the oldest books of the Hebrew Bible, predating final recensions of the full Torah (Pentateuch).[1] Hosea is the source of the phrase "sow the wind", which has passed into common usage in English and other languages. 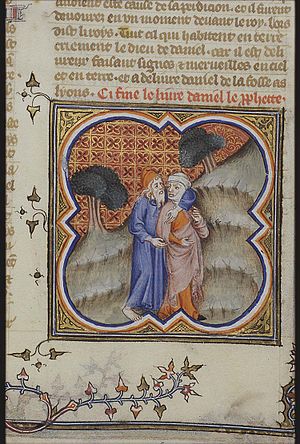 Illustration of Hosea and Gomer from the Bible Historiale, 1372.

Hosea prophesied during a dark and melancholic era of Israel's history, the period of the Northern Kingdom's decline and fall in the 8th century BC. According to the book, the apostasy of the people was rampant, having turned away from God in order to serve both the calves of Jeroboam[2] and Baal, a Canaanite god.[3]

The Book of Hosea says that, during Hosea's lifetime, the kings of the Northern Kingdom, their aristocratic supporters, and the priests had led the people away from the Law of God, as given in the Pentateuch. It says that they forsook the worship of God; they worshiped other gods, especially Baal, the Canaanite storm god, and Asherah, a Canaanite fertility goddess. Other sins followed, says the Book, including homicide, perjury, theft, and sexual sin.[4] Hosea declares that unless they repent of these sins, God will allow their nation to be destroyed, and the people will be taken into captivity by Assyria,[5] the greatest nation of the time.

The prophecy of Hosea centers around God's unending love towards a sinful Israel. In this text, God's agony is expressed over His betrayal by Israel.[6][7][8] Stephen Cook asserts that the prophetic efforts of this book can be summed up in this passage "I have been the Lord your God ever since the land of Egypt; you know no God but me, and besides me there is no savior".[9] Hosea's job was to speak these words during a time when they had been essentially forgotten.[3]

The Book of Hosea contains a number of YHWH prophecies and messages for both Judah and Northern Israel (Samaria). These are delivered by the prophet Hosea.

A brief outline of the concepts presented in the Book of Hosea exist below:

No further breakdown of ideas is clear in 4–14:9/14:10.[10] Following this, the prophecy is made that someday this will all be changed, that God will indeed have pity on Israel.

Chapter two describes a divorce. This divorce seems to be the end of the covenant between God and the Northern Kingdom. However, it is probable that this was again a symbolic act, in which Hosea divorced Gomer for infidelity, and used the occasion to preach the message of God's rejection of the Northern Kingdom. He ends this prophecy with the declaration that God will one day renew the covenant, and will take Israel back in love.

In Chapter three, at God's command, Hosea seeks out Gomer once more. Either she has sold herself into slavery for debt, or she is with a lover who demands money in order to give her up, because Hosea has to buy her back. He takes her home, but refrains from sexual intimacy with her for many days, to symbolize the fact that Israel will be without a king for many years, but that God will take Israel back, even at a cost to Himself.

Chapters 4–14 spell out the allegory at length. Chapters 1–3 speaks of Hosea's family, and the issues with Gomer. Chapters 4–10 contain a series of oracles, or prophetic sermons, showing exactly why God is rejecting the Northern Kingdom (what the grounds are for the divorce). Chapter 11 is God's lament over the necessity of giving up the Northern Kingdom, which is a large part of the people of Israel, whom God loves. God promises not to give them up entirely. Then, in Chapter 12, the prophet pleads for Israel's repentance. Chapter 13 foretells the destruction of the kingdom at the hands of Assyria, because there has been no repentance. In Chapter 14, the prophet urges Israel to seek forgiveness, and promises its restoration, while urging the utmost fidelity to God.

Matthew 2:13 cites Hosea's prophecy in Hosea 11:1 that God would call His Son out of Egypt as foretelling the flight into Egypt and return to Israel of Joseph, Mary, and the infant Jesus.[11]

The capital of the Northern Kingdom fell in 722 BC. All the members of the upper classes and many of the ordinary people were taken captive and carried off to live as prisoners of war.

A summary of Hosea's Story

First, Hosea was directed by God to marry a promiscuous woman of ill-repute, and he did so. Marriage here is symbolic of the covenantal relationship between God and Israel. However, Israel has been unfaithful to God by following other gods and breaking the commandments which are the terms of the covenant, hence Israel is symbolized by a harlot who violates the obligations of marriage to her husband.

Second, Hosea and his wife, Gomer, have a son. God commands that the son be named Jezreel. This name refers to a valley in which much blood had been shed in Israel's history, especially by the kings of the Northern Kingdom.[12] The naming of this son was to stand as a prophecy against the reigning house of the Northern Kingdom, that they would pay for that bloodshed. Jezreel's name means God Sows.

Third, the couple have a daughter. God commands that she be named Lo-ruhamah; Unloved, or, Pity or Pitied On to show Israel that, although God will still have pity on the Southern Kingdom, God will no longer have pity on the Northern Kingdom; its destruction is imminent. In the NIV translation, the omitting of the word "him" leads to speculation as to whether Lo-Ruhamah was the daughter of Hosea or one of Gomer's lovers. James Mays, however, says that the failure to mention Hosea's paternity is "hardly an implication" of Gomer's adultery.[13]

Fourth, a son is born to Gomer. It is questionable whether this child was Hosea's, for God commands that his name be Lo-ammi, meaning "not my people". The child bore this name of shame to show that the Northern Kingdom would also be shamed, for its people would no longer be known as God's People. In other words, the Northern Kingdom had been rejected by God.

Hosea is a prophet whom God uses to portray a message of repentance to God's people. Through Hosea's marriage to Gomer, God, also known as Yahweh, shows his great love for his people, comparing himself to a husband whose wife has committed adultery. It a metaphor of the covenant between God and Israel, and he influenced latter prophets such as Jeremiah. He is among the first writing prophets, and the last chapter of Hosea has a format similar to wisdom literature.

Like Amos, Hosea elevated the religion of Israel to the altitude of ethical monotheism, being the first to emphasize the moral side of God's nature. Israel's faithlessness, which resisted all warnings, compelled Him to punish the people because of His own holiness. Hosea considers infidelity as the chief sin, of which Israel, the adulterous wife, has been guilty against her loving husband, God. Against this he sets the unquenchable love of God, who, in spite of this infidelity, does not cast Israel away forever, but will take His people unto Himself again after the judgment.[14]