The Book of Jeremiah (Hebrew: ספר יִרְמְיָהוּ‎; abbreviated Jer. or Jerm. in citations) is the second of the Latter Prophets in the Hebrew Bible, and the second of the Prophets in the Christian Old Testament.[1] The superscription at chapter Jeremiah 1:1–3 identifies the book as "the words of Jeremiah son of Hilkiah".[1] Of all the prophets, Jeremiah comes through most clearly as a person, ruminating to his scribe Baruch about his role as a servant of God with little good news for his audience.[2] His book is intended as a message to the Jews in exile in Babylon, explaining the disaster of exile as God's response to Israel's pagan worship:[3] the people, says Jeremiah, are like an unfaithful wife and rebellious children, their infidelity and rebelliousness made judgment inevitable, although restoration and a new covenant are foreshadowed.[4] Authentic oracles of Jeremiah are probably to be found in the poetic sections of chapters 1 –25, but the book as a whole has been heavily edited and added to by the prophet's followers (including perhaps his companion, the scribe Baruch) and later generations of Deuteronomists.[5] It has come down in two distinct though related versions, one in Hebrew, the other known from a Greek translation.[6] The date of the two (Greek and Hebrew) can be suggested by the fact that the Greek shows concerns typical of the early Persian period, while the Masoretic (i.e., Hebrew) shows perspectives which, although known in the Persian period, did not reach their realisation until the 2nd century BCE.[7]

(Taken from Michael D. Coogan's A Brief Introduction to the Old Testament; other sources will give slightly different divisions)

It is difficult to discern any structure in Jeremiah, probably because the book had such a long and complex composition history.[2] It can be divided into roughly six sections:[8]

The background to Jeremiah is briefly described in the superscription to the book: Jeremiah began his prophetic mission in the thirteenth year of king Josiah (about 627 BC) and finished in the eleventh year of king Zedekiah (586 BC), "when Jerusalem went into exile in the sixth month." During this period, Josiah changed the Judahite religion, Babylon destroyed Assyria, Egypt briefly imposed vassal status on Judah, Babylon defeated Egypt and made Judah a Babylonian vassal (605 BC), Judah revolted but was subjugated again by Babylon (597 BC), and Judah revolted once more. This revolt was the final one: Babylon destroyed Jerusalem and its Temple and exiled its king and many of the leading citizens in 586 BC, ending Judah's existence as an independent or quasi-independent kingdom and inaugurating the Babylonian exile.[10]

The book can be conveniently divided into biographical, prose and poetic strands, each of which can be summarised separately. The biographical material is to be found in chapters 26–29, 32, and 34–44, and focuses on the events leading up to and surrounding the fall of Jerusalem to the Babylonians in 587 BCE; it provides precise dates for the prophet's activities beginning in 609 BCE. The non-biographical prose passages, such as the Temple sermon in chapter 7 and the covenant passage in 11:1–17, are scattered throughout the book; they show clear affinities with the Deuteronomists, the school of writers and editors who shaped the series of history books from Judges to Kings, and while it is unlikely they come directly from Jeremiah[citation needed], they may well have their roots in traditions about what he said and did. The poetic material is found largely in chapters 1–25 and consists of oracles in which the prophet speaks as God's messenger. These passages, dealing with Israel's unfaithfulness to God, the call to repentance, and attacks on the religious and political establishment, are mostly undated and have no clear context, but it is widely accepted that they represent the teachings of Jeremiah and are the earliest stage of the book. Allied to them, and also probably a reflection of the authentic Jeremiah, are further poetic passages of a more personal nature, which have been called Jeremiah's confessions or spiritual diary. In these poems the prophet agonises over the apparent failure of his mission, is consumed by bitterness at those who oppose or ignore him, and accuses God of betraying him.[11] 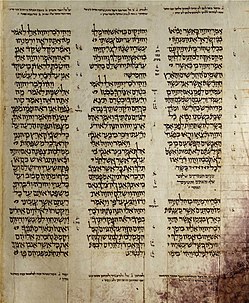 Much of Jeremiah's prophetic preaching is based on the theme of the covenant between God and Israel (God would protect the people in return for their exclusive worship of him): Jeremiah insists that the covenant is conditional, and can be broken by Israel's apostasy (worship of gods other than Yahweh, the God of Israel). The people, says Jeremiah, are like an unfaithful wife and rebellious children: their infidelity and rebelliousness makes judgement inevitable. Interspersed with this are references to repentance and renewal, although it is unclear whether Jeremiah thought that repentance could ward off judgement or whether it would have to follow judgement. The theme of restoration is strongest in chapter 31:32, which looks to a future in which a new covenant made with Israel and Judah, one which will not be broken.[4] This is the theme of the "new covenant" passage at chapter 31:31–34, drawing on Israel's past relationship with God through the covenant at Sinai to foresee a new future in which Israel will be obedient to God.[12]

The "Confessions" of Jeremiah

Scholars from Heinrich Ewald onwards [13] have identified several passages in Jeremiah which can be understood as "confessions": they occur in the first section of the book (chapters 1–25) and are generally identified as Jeremiah 11:18–12.6, 15:10–21, 17:14–18, 18:18–23, and 20:7–18.[14][15] In these five passages, Jeremiah expresses his discontent with the message he is to deliver, but also his steadfast commitment to the divine call despite the fact that he had not sought it out. Additionally, in several of these "confessions", Jeremiah prays that the Lord will take revenge on his persecutors (for example, Jeremiah 12:3[16]).[17] Jeremiah's "confessions" are a type of individual lament. Such laments are found elsewhere in the psalms and the Book of Job. Like Job, Jeremiah curses the day of his birth (Jeremiah 20:14–18 and Job 3:3–10).[18] Likewise, Jeremiah's exclamation "For I hear the whispering of many: Terror is all around!" [19] matches Psalm 31:13[20] exactly. However, Jeremiah's laments are made unique by his insistence that he has been called by Yahweh to deliver his messages.[17] These laments "provide a unique look at the prophet's inner struggle with faith, persecution, and human suffering".[21]

Prophetic gestures, also known as sign-acts or symbolic actions, were a form of communication in which a message was delivered by performing symbolic actions.[17] Not unique to the book of Jeremiah, these were often bizarre and violated the cultural norms of the time.[22] They served the purposes of both drawing an audience and causing that audience to ask questions, giving the prophet an opportunity to explain the meaning of the behavior. The recorder of the events in the written text (i.e. the author of the text) had neither the same audience nor, potentially, the same intent that Jeremiah had in performing these prophetic gestures.[23]

The following is a list – not exhaustive – of noteworthy sign-acts found in Jeremiah:[24] 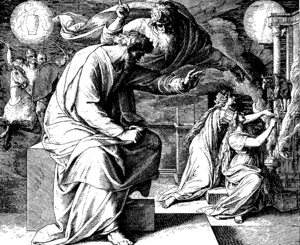 The Call of Jeremiah is depicted in this 1860 woodcut by Julius Schnorr von Karolsfeld.

The influence of Jeremiah during and after the Exile was considerable in some circles, and three additional books, the Book of Baruch, Lamentations, and the Letter of Jeremiah, were attributed to him in Second Temple Judaism (Judaism in the period between the building of the Second Temple in about 515 BCE and its destruction in 70 CE); in the Greek Septuagint they stand between Jeremiah and the Book of Ezekiel, but only Lamentations is included in modern Jewish or Protestant bibles (the Letter of Jeremiah appears in Catholic bibles as the sixth chapter of Baruch).[30] Jeremiah is mentioned by name in Chronicles and the Book of Ezra, both dating from the later Persian period, and his prophecy that the Babylonian exile would last 70 years was taken up and reapplied by the author of the Book of Daniel in the 2nd century BCE.

The understanding of the early Christians that Jesus represented a "new covenant"[31] is based on Jeremiah 31:31–34, in which a future Israel will repent and give God the obedience he demands.[12] The Gospel's portrayal of Jesus as a persecuted prophet owes a great deal to the account of Jeremiah's sufferings in chapters 37–44, as well as to the "Songs of the Suffering Servant" in Isaiah.[32]