The Book of Joshua (Hebrew: ספר יהושע‎ Sefer Yehoshua) is the sixth book in the Hebrew Bible and the Christian Old Testament, and is the first book of the Deuteronomistic history, the story of Israel from the conquest of Canaan to the Babylonian exile.[1]:42 It tells of the campaigns of the Israelites in central, southern and northern Canaan, the destruction of their enemies, and the division of the land among the Twelve Tribes, framed by two set-piece speeches, the first by God commanding the conquest of the land, and, at the end, the second by Joshua warning of the need for faithful observance of the Law (torah) revealed to Moses.[2]

Joshua and the Israelites crossing the Jordan (Gustave Doré)

A. Entry into Canaan

Chapter 1 commences "after the death of Moses"[3] and presents the first of three important moments in Joshua marked with major speeches and reflections by the main characters; here first God, and then Joshua, make speeches about the goal of conquest of the Promised Land; in chapter 12, the narrator looks back on the conquest; and in chapter 23 Joshua gives a speech about what must be done if Israel is to live in peace in the land.[4]:49

God commissions Joshua to take possession of the land and warns him to keep faith with the Mosaic covenant. God's speech foreshadows the major themes of the book: the crossing of the Jordan River and conquest of the land, its distribution, and the imperative need for obedience to the Law. Joshua's own immediate obedience is seen in his speeches to the Israelite commanders and to the Transjordanian tribes, and the Transjordanians' affirmation of Joshua's leadership echoes Yahweh's assurances of victory.[5]:175

Entry into the land and conquest (chapters 2–12)

Rahab, a Canaanite woman of the Bible, sets in motion the entrance into Canaan by the Israelites.[6] To avoid repeating failed attempts by Moses to have notable men of Israel predict the success rate of entry into Canaan mentioned in the book of Numbers, Joshua tasks two regular men with entering Jericho as spies. They arrive at Rahab's house and spend the night. The king of Jericho, having heard of possible Israelite spies, demands that Rahab reveal the men. She tells him that she is unaware of their whereabouts, when in reality, she hid them on her roof under flax. The next morning, Rahab professes her faith in God to the men and acknowledges her belief that Canaan was divinely reserved for the Israelites from the beginning. Because of Rahab's actions, the Israelites are able to enter Canaan.[6] 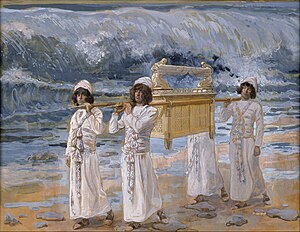 The Israelites cross the Jordan River through a miraculous intervention of God and the Ark of the Covenant and are circumcised at Gibeath-Haaraloth (translated as hill of foreskins), renamed Gilgal in memory. Gilgal sounds like Gallothi, "I have removed", but is more likely to translate as "circle of standing stones". The conquest begins with the battle of Jericho, followed by Ai (central Canaan), after which Joshua builds an altar to Yahweh at Mount Ebal in northern Canaan and renews the Covenant in a ceremony with elements of a divine land-grant ceremony, similar to ceremonies known from Mesopotamia.[5]:180

The narrative then switches to the south. The Gibeonites trick the Israelites into entering an alliance with them by saying that they are not Canaanites. Despite this, the Israelites decide to keep the alliance by enslaving them instead. An alliance of Amorite kingdoms headed by the Canaanite king of Jerusalem attacks the Gibeonites but they are defeated with Yahweh's miraculous help of stopping the Sun and the Moon, and hurling down large hailstones (Joshua 10:10–14). The enemy kings were eventually hanged on trees. The Deuteronomist author may have used the then-recent 701 BCE campaign of the Assyrian king Sennacherib in the Kingdom of Judah as his model; the hanging of the captured kings is in accordance with Assyrian practice of the 8th century BCE.[7]

With the south conquered the narrative moves to the northern campaign. A powerful multi-national (or more accurately, multi-ethnic) coalition headed by the king of Hazor, the most important northern city, is defeated with Yahweh's help. Hazor itself is then captured and destroyed. Chapter 11:16–23 summarises the extent of the conquest: Joshua has taken the entire land, almost entirely through military victories, with only the Gibeonites agreeing to peaceful terms with Israel. The land then "had rest from war" (Joshua 11:23, repeated at 14:15). Chapter 12 lists the vanquished kings on both sides of the Jordan River: the two kings who ruled east of the Jordan who were defeated under Moses' leadership (Joshua 12:1-6; cf. Numbers 21), and the 31 kings on the west of the Jordan who were defeated under Joshua's leadership (Joshua 12:7–24). The list of the 31 kings is quasi-tabular:

Map of the Holy Land, Pietro Vesconte, 1321, showing the allotments of the tribes of Israel. Described by Adolf Erik Nordenskiöld as "the first non-Ptolemaic map of a definite country"[8] 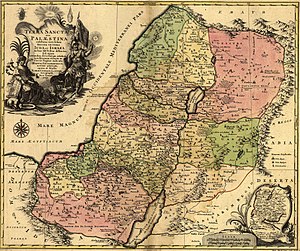 1759 map of the tribal allotments of Israel

Having described how the Israelites and Joshua have carried out the first of their God's commands, the narrative now turns to the second: to "put the people in possession of the land." Joshua is "old, advanced (or stricken) in years" by this time.[9]

This land distribution is a "covenantal land grant": Yahweh, as king, is issuing each tribe its territory.[5]:183 The "Cities of Refuge" and Levitical cities are attached to the end, since it is necessary for the tribes to receive their grants before they allocate parts of it to others. The Transjordanian tribes are dismissed, affirming their loyalty to Yahweh.

The book reaffirms Moses' allocation of land east of the Jordan to the tribes of Reuben and Gad and the half-tribe of Manasseh,[10] and then describes how Joshua divided the newly conquered land of Canaan into parcels, and assigned them to the tribes by lot.[11] Joshua 14:1 also makes reference to the role of Eleazar the priest (ahead of Joshua) in the distribution process.[12] The description serves a theological function to show how the promise of the land was realized in the biblical narrative; its origins are unclear, but the descriptions may reflect geographical relations among the places named.[13]:5

The wording of Joshua 18:1-4 suggests that the tribes of Reuben, Gad, Judah, Ephraim and Manasseh received their land allocation some time before the "remaining seven tribes",[14] and a 21-member expedition set out to survey the remainder of the land with a view to organising the allocation to the tribes of Simeon, Benjamin, Asher, Naphtali, Zebulun, Issachar and Dan. Subsequently, 48 cities with their surrounding lands were allocated to the Tribe of Levi.[15]

Omitted in the Masoretic Text, but present in the Septuagint, is a statement that:

Joshua completed the division of the land in its boundaries, and the children gave a portion to Joshua, by the commandment of the Lord. They gave to him the city for which he asked, Thamnath Sarach gave they him in Mount Ephraim, and Joshua built the city, and dwelt in it. And Joshua took the stone knives with which he had circumcised the children of Israel, which were in the way in the wilderness, and he placed them in Tamnath Sarach.[16]

By the end of chapter 21, the narrative records that the fulfilment of God's promise of land, rest and supremacy over the enemies of the Israelites was complete.[17] The tribes to whom Moses had granted land east of the Jordan are authorized to return home to Gilead (here used in the widest sense for the whole Transjordan district),[18] having faithfully 'kept the charge'[19] of supporting the tribes occupying Canaan. They are granted "riches… with very much livestock, with silver, with gold, with bronze, with iron, and with very much clothing" as a reward.[20]

Joshua, in his old age and conscious that he is "going the way of all the earth",[21] gathers the leaders of the Israelites together and reminds them of Yahweh's great works for them, and of the need to love Yahweh[22] The Israelites are told – just as Joshua himself had been told[23] – that they must comply with "all that is written in the Book of the Law of Moses",[24] neither "turn[ing] aside from it to the right hand or to the left" (i.e. by adding to the law, or diminishing from it).[25]

Joshua meets again with all the people at Shechem in chapter 24 and addresses them a second time. He recounts the history of God's formation of the Israelite nation, beginning with "Terah, the father of Abraham and Nahor, [who] lived beyond the Euphrates River and worshiped other gods."[26] He invited the Israelites to choose between serving the Lord who had delivered them from Egypt, or the gods which their ancestors had served on the other side of the Euphrates, or the gods of the Amorites in whose land they now lived. The people chose to serve the Lord, a decision which Joshua recorded in the Book of the Law of God. He then erected a memorial stone "under the oak that was by the sanctuary of the Lord" in Shechem.[27] The oak is associated with the Oak of Moreh where Abram had set up camp during his travels in this area.[28][citation needed] Thus "Joshua made a covenant with the people", literally "cut a covenant", a phrase common to the Hebrew, Greek, and Latin languages. It derives from the custom of sacrifice, in which the victims were cut in pieces and offered to the deity invoked in ratification of the engagement.[29]

The people then returned to their inheritance i.e. their allocated lands.[30]

The Book of Joshua closes with three concluding items (referred to in the Jerusalem Bible as "Two Additions"):[31]

There were no Levitical cities given to the descendants of Aaron in Ephraim, so theologians Carl Friedrich Keil and Franz Delitzsch supposed the land may have been at Geba in the territory of the Tribe of Benjamin: "the situation, 'upon the mountains of Ephraim', is not at variance with this view, as these mountains extended, according to Judges 4:5, etc., far into the territory of Benjamin".[35]

In some manuscripts and editions of the Septuagint, there is an additional verse relating to the apostasy of the Israelites after Joshua's death.

See also: History of ancient Israel and Judah
See also: Cities in the Book of Joshua

"Sun, stand thou still upon Gibeon" (sculpture by Shmuel Bar-Even)

Washington Manuscript I, a Greek manuscript featuring the end of Deuteronomy and beginning of Joshua

Fragments of Joshua dating to the Hasmonean period were found among the Dead Sea Scrolls (4QJosha and 4QJoshb, found in Qumran Cave 4).[36][37] The Septuagint (Greek translation) is found in manuscripts such as Washington Manuscript I (5th century CE), and a reduced version of the Septuagint text is found in the illustrated Joshua Roll.[38][39] The earliest complete copy of the book in Hebrew is in the Aleppo Codex (10th century CE).[40][41] 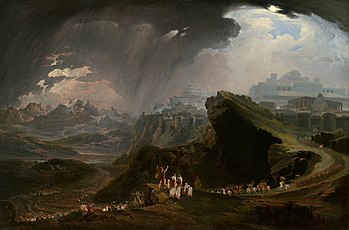