The Book of Lamentations (Hebrew: אֵיכָה‎, ‘Êykhôh, from its incipit meaning "how") is a collection of poetic laments for the destruction of Jerusalem in 586 BCE.[1] In the Hebrew Bible it appears in the Ketuvim ("Writings"), beside the Song of Songs, Book of Ruth, Ecclesiastes and the Book of Esther (the Megillot or "Five Scrolls"), although there is no set order; in the Christian Old Testament it follows the Book of Jeremiah, as the prophet Jeremiah is its traditional author.[2] Jeremiah's authorship is still generally accepted even though authorship isn't specifically notated in the text. According to insight.org "Both Jewish and Christian tradition ascribe authorship to Jeremiah, and the Septuagint—the Greek translation of the Old Testament—even adds a note asserting Jeremiah as the writer of the book. In addition, when the early Christian church father Jerome translated the Bible into Latin, he added a note claiming Jeremiah as the author of Lamentations" It is generally accepted that the destruction of Jerusalem by Babylon in 586 BCE forms the background to the poems.[2]

The book is partly a traditional "city lament" mourning the desertion of the city by God, its destruction, and the ultimate return of the divinity, and partly a funeral dirge in which the bereaved bewails and addresses the dead.[2] The tone is bleak: God does not speak, the degree of suffering is presented as overwhelming, and expectations of future redemption are minimal. Nonetheless, the author repeatedly makes clear that the city (and even the author himself) had profusely sinned against God, to which God had strongly responded. In doing so the author does not blame God but rather presents him as righteous, just and sometimes even as merciful.

The book consists of five separate poems. In the first (chapter 1), the city sits as a desolate weeping widow overcome with miseries. In Chapter 2 these miseries are described in connection with national sins and acts of God. Chapter 3 speaks of hope for the people of God: the chastisement would only be for their good; a better day would dawn for them. Chapter 4 laments the ruin and desolation of the city and temple, but traces it to the people's sins. Chapter 5 is a prayer that Zion's reproach may be taken away in the repentance and recovery of the people.

Lamentations combines elements of the qinah, a funeral dirge for the loss of the city, and the "communal lament" pleading for the restoration of its people.[3] It reflects the view, traceable to Sumerian literature of a thousand years earlier, that the destruction of the holy city was a punishment by God for the communal sin of its people.[4]

Beginning with the reality of disaster, Lamentations concludes with the bitter possibility that God may have finally rejected Israel (chapter 5:22). Sufferers in the face of grief are not urged to a confidence in the goodness of God; in fact God is accountable for the disaster. The poet acknowledges that this suffering is a just punishment, still God is held to have had choice over whether to act in this way and at this time. Hope arises from a recollection of God's past goodness, but although this justifies a cry to God to act in deliverance, there is no guarantee that he will. Repentance will not persuade God to be gracious, since he is free to give or withhold grace as he chooses. In the end, the possibility is that God has finally rejected his people and may not again deliver them. Nevertheless, it also affirms confidence that the mercies of Yahweh (the God of Israel) never end, but are new every morning (3:22–33).[5] 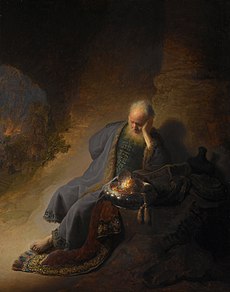 Lamentations consists of five distinct poems, corresponding to its five chapters. Two of its defining characteristic features are the alphabetic acrostic and its qinah meter. But few English translations capture either of these; even fewer attempt to capture both.[6]

The first four are written as acrostics. Chapters 1, 2, and 4 each have 22 verses, corresponding to the 22 letters of the Hebrew alphabet, the first lines beginning with the first letter of the alphabet, the second with the second letter, and so on. Chapter 3 has 66 verses, so that each letter begins three lines. Unlike standard alphabetical order, in the middle chapters of Lamentations, the letter Pe (the 17th letter) comes before Ayin (the 16th). The first chapter uses standard alphabetical order.

The fifth poem, corresponding to the fifth chapter, is not acrostic but still has 22 lines.[7]

Although some claim that purpose or function of the acrostic form is unknown,[4] it is frequently thought that a complete alphabetical order expresses a principle of completeness, from Alef (first letter) to Tav (22nd letter); the English equivalent would be "from A to Z".[8]

Very few English translations even attempt to capture this acrostic nature. One which attempts to do so is that by Ronald Knox[9] although its mapping of the 22 Hebrew letters into the Western alphabet's 26 uses 'A' to 'V' (omitting W, X, Y and Z), thus lacking the "A to Z" sense of completeness.

Its first four chapters have a well defined qinah rhythm of three stresses followed by two, although the fifth chapter lacks this.[10] Dobbs-Allsopp describes this meter as "the rhythmic dominance of unbalanced and enjambed lines".[11] Again, few English translations attempt to capture this. Exceptions include Robert Alter's The Hebrew Bible and the New American Bible Revised Edition.[12]

Lamentations has traditionally been ascribed to Jeremiah, probably on the grounds of the reference in 2 Chronicles 35:25 to the prophet composing a lament on the death of King Josiah, but there is no reference to Josiah in the book and no reason to connect it to Jeremiah.[7] The language fits an Exilic date (586–520 BCE), and the poems probably originated from Judeans who remained in the land.[13] Scholars are divided over whether they are the work of one or multiple authors.[13] One clue pointing to multiple authors is that the gender and situation of the first-person witness changes – the narration is feminine in the first and second lamentation, and masculine in the third, while the fourth and fifth are eyewitness reports of Jerusalem's destruction;[14] conversely, the similarities of style, vocabulary, and theological outlook, as well as the uniform historical setting, are arguments for one author.[15]

Lamentations is recited annually by Jews on the fast day of Tisha B'Av ("Ninth of Av"), mourning the destruction of both the First Temple and the Second.

In Western Christianity, readings (often chanted) and choral settings of extracts from the book are used in the Lenten religious service known as Tenebrae (Latin for darkness). In the Church of England, readings are used at Morning and Evening Prayer on the Monday and Tuesday of Holy Week, and at Evening Prayer on Good Friday.

In the Coptic Orthodox Church, the book's third chapter is chanted on the twelfth hour of the Good Friday service, that commemorates the burial of Jesus.[citation needed]