The Book of Kings (Hebrew: ספר מלכים‎, sefer melakhim) is a book in the Hebrew Bible and two books (1 Kings and 2 Kings) in the Christian Old Testament. It concludes the Deuteronomistic history, a history of Israel also including the books of Joshua and Judges and the Books of Samuel.

Biblical commentators believe the Books of Kings were written to provide a theological explanation for the destruction of the Kingdom of Judah by Babylon in c. 586 BCE and to provide a foundation for a return from Babylonian exile.[1] The two books of Kings present a history of ancient Israel and Judah, from the death of King David to the release of Jehoiachin from imprisonment in Babylon—a period of some 400 years (c. 960 – c. 560 BCE).[1] 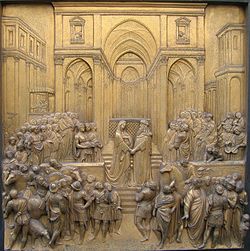 Solomon greeting the Queen of Sheba – gate of Florence Baptistry

The Jerusalem Bible divides the two Books of Kings into eight sections:

In David's old age, Adonijah proclaims himself David's successor. But Solomon's supporters arrange for David to proclaim Solomon as his successor, and he comes to the throne after David's death.[2]

At the beginning of his reign, Solomon assumes God's promises to David and brings splendour to Israel and peace and prosperity to his people.[3] The centrepiece of Solomon's reign is the building of the First Temple. The claim that this took place 480 years after the Exodus from Egypt marks it as a key event in Israel's history.[4] Eventually, Solomon follows other gods and oppresses Israel.[5]

As a consequence of Solomon's failure to stamp out the worship of gods other than Yahweh, the kingdom of David is split in two during the reign of Solomon's son Rehoboam, who becomes the first king to reign over the kingdom of Judah.[6] The kings who follow Rehoboam in Jerusalem continue the royal line of David, i.e., they inherit Yahweh's promise to David.

In the north, however, dynasties follow each other in rapid succession, and the kings are uniformly bad, i.e., they fail to follow Yahweh alone. At length God brings the Assyrians to destroy the northern kingdom, leaving Judah as the sole custodian of the promise.

Hezekiah, the 14th king of Judah, does "what [is] right in the Lord’s sight just as his ancestor David had done" [7] He institutes a far reaching religious reform: centralising sacrifice at the temple in Jerusalem, and destroying the images of other gods. Yahweh saves Jerusalem and the kingdom from an invasion by Assyria. But Manasseh, the next king of Judah, reverses the reforms, and God announces that he will destroy Jerusalem because of this apostasy by the king. Manasseh's righteous grandson Josiah reinstitutes the reforms of Hezekiah, but it is too late: God, speaking through the prophetess Huldah, affirms that Jerusalem shall be destroyed after the death of Josiah.

In the final chapters, God brings the Neo-Babylonian Empire of King Nebuchadnezzar against Jerusalem. Yahweh withholds aid from his people; Jerusalem is razed and the Temple destroyed; and the priests, prophets, and royal court are led into captivity. The final verses record how Jehoiachin, the last king, is set free and given honour by the king of Babylon.[8] 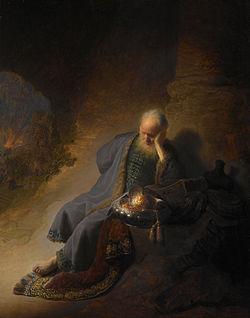 In the Hebrew Bible (the Bible used by Jews), First and Second Kings are a single book, as are the First and Second Books of Samuel. When this was translated into Greek in the last few centuries BCE, Samuel was joined with Kings in a four-part work called the Book of Kingdoms. Orthodox Christians continue to use the Greek translation (the Septuagint), but when a Latin translation (called the Vulgate) was made for the Western church, Kingdoms was first retitled the Book of Kings, parts One to Four, and eventually both Samuel and Kings were separated into two books each.[9]

Thus, the books now commonly known as 1 Samuel and 2 Samuel are known in the Vulgate as 1 Kings and 2 Kings (in imitation of the Septuagint). What are now commonly known as 1 Kings and 2 Kings would be 3 Kings and 4 Kings in old Bibles before the year 1516, such as in the Vulgate and the Septuagint.[10] The division known today, used by Protestant Bibles and adopted by Catholics, came into use in 1517. Some Bibles—for example, the Douay Rheims Bible—still preserve the old denomination.[11]

According to Jewish tradition the author of Kings was Jeremiah, who would have been alive during the fall of Jerusalem in 586 BCE.[12] The most common view today accepts Martin Noth's thesis that Kings concludes a unified series of books which reflect the language and theology of the Book of Deuteronomy, and which biblical scholars therefore call the Deuteronomistic history.[13] Noth argued that the History was the work of a single individual living in the 6th century BCE, but scholars today tend to treat it as made up of at least two layers,[14] a first edition from the time of Josiah (late 7th century BCE), promoting Josiah's religious reforms and the need for repentance, and (2) a second and final edition from the mid-6th century BCE.[15][16] Further levels of editing have also been proposed, including: a late 8th century BCE edition pointing to Hezekiah of Judah as the model for kingship; an earlier 8th-century BCE version with a similar message but identifying Jehu of Israel as the ideal king; and an even earlier version promoting the House of David as the key to national well-being.[17]

The editors/authors of the Deuteronomistic history cite a number of sources, including (for example) a "Book of the Acts of Solomon" and, frequently, the "Annals of the Kings of Judah" and a separate book, "Chronicles of the Kings of Israel". The "Deuteronomic" perspective (that of the book of Deuteronomy) is particularly evident in prayers and speeches spoken by key figures at major transition points: Solomon's speech at the dedication of the Temple is a key example.[15] The sources have been heavily edited to meet the Deuteronomistic agenda,[18] but in the broadest sense they appear to have been: 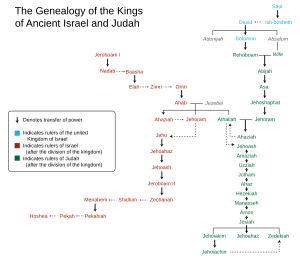 The kings of Israel and Judah 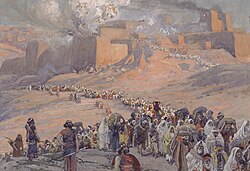 James Tissot, The Flight of the Prisoners – the fall of Jerusalem, 586 BCE

Main article: Chronology of the Bible

The standard Hebrew text of Kings presents an impossible chronology.[24] To take just a single example, Omri's accession to the throne of Israel in the 31st year of Asa of Judah[25] cannot follow the death of his predecessor Zimri in the 27th year of Asa[26].[27] The Greek text corrects the impossibilities but does not seem to represent an earlier version.[28] A large number of scholars have claimed to solve the difficulties, but the results differ, sometimes widely, and none has achieved consensus status.[29]

The book 2 Chronicles covers much the same time-period as the books of Kings, but it ignores the northern Kingdom of Israel almost completely, David is given a major role in planning the Temple, Hezekiah is given a much more far-reaching program of reform, and Manasseh of Judah is given an opportunity to repent of his sins, apparently to account for his long reign.[30]