The Epistle of Jude, often shortened to Jude, is the penultimate book of the New Testament and the Bible as a whole and is traditionally attributed to Jude, the servant of Jesus and the brother of James the Just.

Colophon at the Epistle of Jude in the Codex Alexandrinus

Some early manuscripts containing the text of this epistle are:[1]

The epistle title is written as follows: "Jude, a servant of Jesus Christ and brother of James" (NRSV). "James" is generally taken to mean James the Just, a prominent leader in the early church. Not a lot is known of Jude, which would explain the apparent need to identify him by reference to his better-known brother.[4]

There is also a dispute as to whether "brother" means someone who has the same father and mother, or a half-brother, cousin, or more distant familial relationship. This dispute over the true meaning of "brother" grew as the doctrine of the Virgin Birth evolved.[6][7][8]

Outside the book of Jude, a "Jude" is mentioned five times in the New Testament: three times as Jude the Apostle,[9] and twice as Jude the brother of Jesus[10] (aside from references to Judas Iscariot and Judah (son of Jacob)). Debate continues as to whether the author of the epistle is either, both, or neither. Some scholars have argued that since the author of the letter has not identified himself as an apostle and actually refers to the apostles as a third party, he cannot be identified with Jude the Apostle. Others have drawn the opposite conclusion, i.e., that, as an apostle, he would not have made a claim of apostleship on his own behalf.[11]

The letter of Jude was one of the disputed books of the biblical canon.[12] The links between the Epistle and 2 Peter, its use of the biblical apocrypha, and its brevity raised concern. It is one of the shortest books in the Bible: only 1 chapter of 25 verses long.

The Epistle of Jude is held as canonical in the Christian Church. Conservative scholars date it between 70 and 90. Some scholars consider the letter a pseudonymous work written between the end of the 1st century and the first quarter of the 2nd century because of its references to the apostles[13] and to tradition[14] and because of its competent Greek style.[4][15][16]

"More remarkable is the evidence that by the end of the second century Jude was widely accepted as canonical."[17] Clement of Alexandria, Tertullian, and the Muratorian canon considered the letter canonical. The first historical record of doubts as to authorship are found in the writings of Origen of Alexandria, who spoke of the doubts held by some, albeit not him. Eusebius classified it with the "disputed writings, the antilegomena." The letter was eventually accepted as part of the biblical canon by Church Fathers such as Athanasius of Alexandria[18] and the Synods of Laodicea (c. 363)[19] and Carthage (c. 397).[20]

Jude urges his readers to defend the deposit of Christ's doctrine that had been closed by the time he wrote his epistle, and to remember the words of the apostles spoken somewhat before. He warns about false teachers who use grace as a pretext for wantonness. Jude then asks the reader to recall how even after the Lord saved his own people out of the land of Egypt, he did not hesitate to destroy those who fell into unbelief, much as he punished the angels who fell from their original exalted status and Sodom and Gomorrah.[21] He also paraphrases (verse 9) an incident in a text that has been lost about Satan and Michael the Archangel quarreling over the body of Moses.

Continuing the analogy from Israel's history, he says that the false teachers have followed in the way of Cain, have rushed after reward into the error of Balaam, and have perished in the rebellion of Korach. He describes in vivid terms the apostates of his day, calling them "clouds without rain", "trees without fruit", "foaming waves of the sea", and "wandering stars"[22] He exhorts believers to remember the words spoken by the Apostles, using language similar to the second epistle of Peter to answer concerns that the Lord seemed to tarry, "How that they told you there should be mockers in the last time, who should walk after their own ungodly lusts...",[23] and to keep themselves in God's love,[24] before delivering a doxology to "the only, the wise God our savior".[25]

Jude quotes directly from the Book of Enoch, part of the scripture of the Ethiopian and Eritrean churches but rejected by other churches. He cites Enoch's prophecy that the Lord would come with many thousands of his saints to render judgment on the whole world.

II. Occasion for the Letter (3–4)
A. The change of Subject (3)
B. The Reason for the Change: The Presence of Godless Apostates (4)

The Epistle of Jude is a brief book of only a single chapter with 25 verses. It was composed as an encyclical letter—that is, one not directed to the members of one church in particular, but intended rather to be circulated and read in all churches.

The wording and syntax of this epistle in its original Greek demonstrates that the author was capable and fluent. The epistle is addressed to Christians in general,[27] and it warns them about the doctrine of certain errant teachers to whom they were exposed. The epistle's style is combative, impassioned, and rushed. Many examples of evildoers and warnings about their fates are given in rapid succession.

The epistle concludes with a doxology, which is considered by Peter H. Davids to be one of the highest in quality contained in the Bible.[28]

Part of Jude is very similar to 2 Peter (mainly 2 Peter chapter 2), so much so that most scholars agree that either one letter used the other directly, or they both drew on a common source.[29] Comparing the Greek text portions of 2 Peter 2:1–3:3 (426 words) to Jude 4–18 (311 words) results in 80 words in common and 7 words of substituted synonyms.[30]

The shared passages are:[31]

Because this epistle is much shorter than 2 Peter, and due to various stylistic details, some writers consider Jude the source for the similar passages of 2 Peter.[32] However, other writers, arguing that Jude 18 quotes 2 Peter 3:3 as past tense, consider Jude to have come after 2 Peter.[33]

Some scholars who consider Jude to predate 2 Peter note that the latter appears to quote the former but omits the reference to the non-canonical book of Enoch.[34]

References to other books 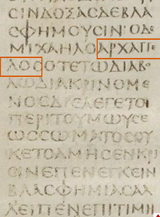 The Epistle of Jude references at least three other books, with two (Book of Zechariah & 2 Peter) being canonical in all churches and the other (Book of Enoch) non-canonical in most churches.

Verse 9 refers to a dispute between Michael the Archangel and the devil about the body of Moses. Some interpreters understand this reference to be an allusion to the events described in Zechariah 3:1–2.[35][36] The classical theologian Origen attributes this reference to the non-canonical Assumption of Moses.[37] According to James Charlesworth, there is no evidence the surviving book of this name ever contained any such content.[38] Others believe it to be in the lost ending of the book.[38][39]

Verses 14–15 contain a direct quotation of a prophecy from 1 Enoch 1:9. The title "Enoch, the seventh from Adam" is also sourced from 1 En. 60:1. Most commentators assume that this indicates that Jude accepts the antediluvian patriarch Enoch as the author of the Book of Enoch which contains the same quotation. However, an alternative explanation is that Jude quotes the Book of Enoch aware that verses 14–15 are in fact an expansion of the words of Moses from Deuteronomy 33:2.[40][41][42] This is supported by Jude's unusual Greek statement that "Enoch the Seventh from Adam prophesied to the false teachers", not concerning them.[43]

The Book of Enoch is not considered canonical by most churches, although it is by the Ethiopian Orthodox church. According to Western scholars, the older sections of the Book of Enoch (mainly in the Book of the Watchers) date from about 300 BC and the latest part (Book of Parables) probably was composed at the end of the 1st century BC.[44] 1 Enoch 1:9, mentioned above, is part of the pseudepigrapha and is among the Dead Sea Scrolls [4Q Enoch (4Q204[4QENAR]) COL I 16–18].[45] It is generally accepted by scholars that the author of the Epistle of Jude was familiar with the Book of Enoch and was influenced by it in thought and diction.[46]

Online translations of the Epistle of Jude: