The Epistle of Paul to Titus, usually referred to simply as Titus, is one of the three pastoral epistles (along with 1 Timothy and 2 Timothy) in the New Testament, historically attributed to Paul the Apostle.[1] It is addressed to Saint Titus[1] and describes the requirements and duties of elders and bishops.[2]

Not mentioned in the Acts of the Apostles, Saint Titus was noted in Galatians (cf. Gal. 2:1, 3) where Paul wrote of journeying to Jerusalem with Barnabas, accompanied by Titus. He was then dispatched to Corinth, Greece, where he successfully reconciled the Christian community there with Paul, its founder. Titus was later left on the island of Crete to help organize the Church, and later met back with the Apostle Paul in Nicopolis. He soon went to Dalmatia (now Croatia). According to Eusebius of Caesarea in the Ecclesiastical History, he served as the first bishop of Crete.[3] He was buried in Cortyna (Gortyna), Crete; his head was later removed to Venice during the invasion of Crete by the Saracens in 832 and was enshrined in St Mark's Basilica, Venice, Italy.[citation needed]

Titus, along with the two other pastoral epistles (1 Timothy and 2 Timothy), is regarded by some scholars as being pseudepigraphical.[4] On the basis of the language and content of the pastoral epistles, these scholars reject that they were written by Paul and believe that they were written by an anonymous forger after his death. Critics claim the vocabulary and style of the Pauline letters could not have been written by Paul according to available biographical information and reflect the views of the emerging Church rather than the apostle's. These scholars date the epistle from the 80s AD up to the end of the 2nd century.[5] The Church of England's Common Worship Lectionary Scripture Commentary concurs with this view: "the proportioning of the theological and practical themes is one factor that leads us to think of these writings as coming from the post-Pauline church world of the late first or early second century".[6]

Titus has a very close affinity with 1 Timothy, sharing similar phrases and expressions and similar subject matter.[7][8] This has led many scholars to believe that it was written by the same author who wrote 1 and 2 Timothy—their author is sometimes referred to as "the Pastor."[9]

The minority of scholars who believe Paul wrote Titus date its composition from the circumstance that it was written after Paul's visit to Crete (Titus 1:5). That visit could not be the one referred to in the Acts of the Apostles 27:7, when Paul was on his voyage to Rome as a prisoner, and where he continued a prisoner for two years. Thus traditional exegesis supposes that after his release Paul sailed from Rome into Asia, passing Crete by the way, and that there he left Titus "to set in order the things that were wanting." Thence he would have gone to Ephesus, where he left Timothy, and from Ephesus to Macedonia, where he wrote the First Epistle to Timothy, and thence, according to the subscription of this epistle, to "Nicopolis of Macedonia",[10] from which place he wrote to Titus, about 66 or 67. 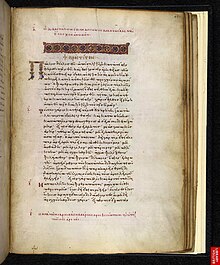 The first page of the epistle in Minuscule 699 gives its title as 'προς τιτον, "To Titus."

Recent scholarship has revived the theory that Paul used an amanuensis, or secretaries, in writing his letters (e.g. Rom 16:22), but possibly Luke for the pastorals[11][12] This was a common practice in ancient letter writing, even for the biblical writers.[13][14]

One of the secular peculiarities of the Epistle to Titus is the reference to the Epimenides paradox: "One of the Cretans, a prophet of their own, said, 'Cretans are always liars'."[15] The statement by a member of a group that all members are liars is a famous logic problem, applicable also to Psalms 116:11.[16][17]

In Titus 1:9 Paul describes some among the Jewish Christians as false teachers.[18][19] Paul describes the false teachers as rebellious, empty talkers who claim to teach the law "without understanding"[20] and deceivers who deliberately lead the faithful astray.[21] Calvin wrote that vain talking (Greek: mataiologia) is contrasted here with useful doctrine, including any trivial and frivolous doctrines that contribute nothing to piety and fear of God.[22]

Online translations of the Epistle to Titus: