The First Epistle of John, often referred to as First John and written 1 John or I John, is the first of the Johannine epistles of the New Testament, and the fourth of the catholic epistles. There is no scholarly consensus as to the authorship of the Johannine works. The author of the First Epistle is termed John the Evangelist, who most scholars believe is not the same as John the Apostle. Most scholars believe the three Johannine epistles have the same author, but there is no consensus if this was also the author of the Gospel of John.

This epistle was probably written in Ephesus between 95 and 110 AD.[1] The author advises Christians on how to discern true teachers: by their ethics, their proclamation of Jesus in the flesh, and by their love.[1] The original text was written in Koine Greek. The epistle is divided into five chapters.

The main themes of the epistle are love and fellowship with God.[2][3] The author describes various tests by which readers may ascertain whether or not their communion with God is genuine, and teaches that the proof of spiritual regeneration is a life of active righteousness.[4] It also distinguishes between the world (which is full of evil and under the dominion of Satan) and the children of God (who are set apart from the world).[5]

The epistle is not written in the same form as the other biblical epistles, as it lacks an epistolary opening or conclusion.[6] The epistle is written in a simple style, without syntactical flourishes,[6] and makes frequent use of asyndeton, where related thoughts are placed next to one another without conjunctions.[7] In contrast to the linear style used in the Pauline epistles, biblical scholar Ernest DeWitt Burton suggests that John's thought "moves in circles", forming a slowly advancing sequence of thought.[5] This is similar to the parallel structure of Hebrew poetry, in which the second verse of a couplet often carries the same meaning as the first, although in this epistle the frequent recapitulations of already expressed ideas serve also to add to what has previously been said.[8] In summary, the epistle may be said to exhibit a paraenetic style which is "marked by personal appeal, contrasts of right and wrong, true and false, and an occasional rhetorical question".[6]

Some scholars have proposed the idea that the epistle is really John's commentary on a selection of traditional parallel couplets. While this theory, first propounded by Ernst von Dobschütz and Rudolf Bultmann, is not universally accepted, Amos Wilder writes that, "It is at least clear that there are considerable and sometimes continuous elements in the epistle whose style distinguishes them from that of the author both with respect to poetic structure and syntactic usage."[9]

The epistle is traditionally held to have been composed by John the Evangelist, at Ephesus,[10] when the writer was in advanced age. The epistle's content, language and conceptual style are very similar to the Gospel of John, 2 John, and 3 John.[1] Thus, at the end of the 19th century scholar Ernest DeWitt Burton wrote that there could be "no reasonable doubt" that 1 John and the gospel were written by the same author.[11]

Beginning in the 20th century, however, critical scholars like Heinrich Julius Holtzmann and C. H. Dodd identified the Gospel of John and 1 John as works of different authors. Certain linguistic features of the two texts support this view. For instance, 1 John often uses a demonstrative pronoun at the beginning of a sentence, then a particle or conjunction, followed by an explanation or definition of the demonstrative at the end of the sentence—a stylistic technique which is not used in the gospel.[6] The author of the epistle also "uses the conditional sentence in a variety of rhetorical figures which are unknown to the gospel". This indicates, at the very least, the linguistic characteristics changed over time.[12] Today, following the work of J. Louis Martyn and Raymond Brown, the majority of scholars believe that John and 1 John were written by different members of the same community: the "Johannine Community".[13]

Most critical scholars conclude that John the Apostle wrote none of these works.[14][15]

"The Fourth Gospel addresses itself to the challenges posed by Judaism and others outside Johannine circles who have rejected the community's vision of Jesus as preexistent Son, sent by the Father." The New Jerome Biblical Commentary suggests that the three Johannine epistles "describe the fracturing of the Johannine community itself".[16]

The author wrote the epistle so that the joy of his audience would "be full" (1:4); that they would "not practice sin" (2:1); that they would not be deceived by false teachers (2:26); and that "you who believe in the name of the Son of God... may continue to know that you have eternal life" (5:13). There are two main approaches to understanding the overall purpose of the letter, tests of life (popularized by Robert Law) and tests of fellowship (popularized by John Mitchell and Zane Hodges). Whereas the Gospel of John was written for unbelievers (John 20:31), this epistle was written to those who were already believers (5:13).[17] Ernest DeWitt Burton found it likely that its audience was largely gentile rather than Jewish, since it contains few Old Testament quotations or distinctly Jewish forms of expression.[10]

The earliest written versions of the epistle have been lost; some of the earliest surviving manuscripts include:

Different versions of the Greek manuscript have different wording for some verses.

Further information: Textual variants in the First Epistle of John

Verses 1-4 of the first chapter constitute a prologue or introduction concerning the Incarnate Word.[20] Like the Prologue to John's Gospel, this introduction tells us that what the author purposes to write about is the Word which is the Life.[21] Anglican commentator Alfred Plummer notes that "the similarity to the opening of the Gospel is manifest", but with a significant difference, in that the gospel refers to the existence of the Ancient Greek: λόγος, lógos, word, before the creation, whereas here the point is that the word existed before the incarnation.[21] 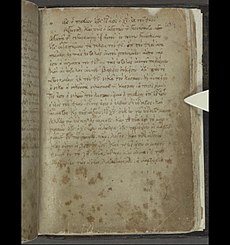 A Trinitarian gloss (marginal note) known as the Johannine Comma, added to Latin translations of the epistle in the 4th century,[22] was interpolated (added to the main text) within 1 John 5:7-8 over the course of the Middle Ages.[22] Although no Greek manuscripts before the 15th century include the passage, Erasmus added it to later editions of his edition of the New Testament, beginning in 1522.[23] Bibles translated from his edition integrate the passage, including the King James Version (1611), which renders it as follows (in italics):

Translations made since the 18th century and based on a critical edition do not include this text, or include it as a footnote. Because the addition supports the doctrine of trinitarianism, it featured in Protestant and Catholic debates on this subject in the early modern period.

Plummer suggests that here, "as at the end of [John's] Gospel [26] and the Second Epistle,[27] 'Amen' is the addition of a copyist".[21] The Textus Receptus version includes "Ἀμήν", Amen, at the end but critical editions do not.[28]

Around 415, Augustine of Hippo wrote a commentary in Latin On the Epistle of John to the Parthians (in Latin, ad Parthos), in which he identifies the addressees of John's letter as Parthians. It has occasionally been suggested that this refers to a community of converts in the Jewish community of Babylonia. Around 730, Bede wrote that Athanasius of Alexandria had also believed in a Parthian destination for 1 John. This tradition, however, is known only from Latin sources. (Three late Greek manuscripts of 2 John label it "to the Parthians".) On balance, it is likely that John's first letter was written for the Ephesian church and that the Parthian label results from a misreading or misunderstanding.[29]