First Epistle to the Thessalonians

Papyrus 65, dating to the 3rd or 4th century

The First Epistle to the Thessalonians, commonly referred to as First Thessalonians or 1 Thessalonians, is a Pauline epistle of the New Testament of the Christian Bible. The epistle is attributed to Paul the Apostle, and is addressed to the church in Thessalonica, in modern-day Greece. It is likely the first of Paul's letters, probably written by the end of AD 52.[1] However, some scholars believe the Epistle to Galatians may have been written by AD 48.[2]

Most New Testament scholars believe Paul the Apostle wrote this letter from Corinth, although information appended to this work in many early manuscripts (e.g., Codices Alexandrinus, Mosquensis, and Angelicus) state that Paul wrote it in Athens[3] after Timothy had returned from Macedonia with news of the state of the church in Thessalonica.[4][5] Paul was known to the Church at Thessalonica, having preached there.[6]

For the most part, the letter is personal in nature, with only the final two chapters spent addressing issues of doctrine, almost as an aside. Paul's main purpose in writing is to encourage and reassure the Christians there. Paul urges them to go on working quietly while waiting in hope for the return of Christ.

Unlike all subsequent Pauline epistles, 1 Thessalonians does not focus on justification by faith or questions of Jewish–Gentile relations, themes that are covered in all other letters. Many scholars see this as an indication that this letter was written before the Epistle to the Galatians, where Paul's positions on these matters were formed and elucidated.[1] 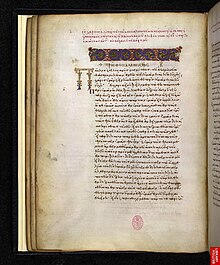 The first page of the epistle in Minuscule 699 gives its title as προς θεσσαλονικεις, "To the Thessalonians."

The majority of New Testament scholars hold 1 Thessalonians to be authentic, although a number of scholars in the mid-19th century contested its authenticity, most notably Clement Schrader and F.C. Baur.[7] 1 Thessalonians matches other accepted Pauline letters, both in style and in content, and its authorship is also affirmed by 2 Thessalonians.[8]

Thessalonians 2:13–16[9] have often been regarded as a post-Pauline interpolation. The following arguments have been based on the content:

It is also sometimes suggested that 1 Thes. 5:1–11 is a post-Pauline insertion that has many features of Lukan language and theology that serves as an apologetic correction to Paul's imminent expectation of the Second Coming in 1 Thes. 4:13–18.[16]

Other scholars, such as Schmithals,[17] Eckhart,[18] Demke[19] and Munro,[20] have developed complicated theories involving redaction and interpolation in 1 and 2 Thessalonians.

Paul claimed the title of the "Apostle to the Gentiles", and established gentile churches in several important cities in the Roman Empire.[21]

According to Bart D. Ehrman, the Acts of the Apostles tells a different story of Paul's career,[21] which reports that, while there were "some" Jews converted during Paul's initial preaching in Thessalonica, the gentiles who were converted were "a large number" and the Jews as a body fiercely opposed Paul's work there.[22]

Paul, speaking for himself, Silas, and Timothy, gives thanks for the news about their faith and love; he reminds them of the kind of life he had lived while he was with them. Paul stresses how honorably he conducted himself, reminding them that he had worked to earn his keep, taking great pains not to burden anyone. He did this, he says, even though he could have used his status as an apostle to impose upon them.

Paul goes on to explain that the dead will be resurrected prior to those still living, and both groups will greet the Lord in the air.[32]