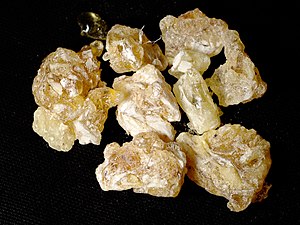 Frankincense (also known as olibanum) is an aromatic resin used in incense and perfumes, obtained from trees of the genus Boswellia in the family Burseraceae. The word is from Old French franc encens ('high-quality incense').[1]

There are several species of Boswellia that produce true frankincense:[2] Boswellia sacra (syn. B. bhaw-dajiana, syn. B. carteri), B. frereana, B. serrata (B. thurifera, Indian frankincense), and B. papyrifera. Resin from each is available in various grades, which depend on the time of harvesting. The resin is hand-sorted for quality.

Etymology and other names

The English word frankincense derives from the Old French expression franc encens, meaning 'high-quality incense'. The word Lua error in Module:Language at line 197: Name for the language code "fro" could not be retrieved with mw.language.fetchLanguageName, so it should be added to Module:Language/data. in Old French meant 'noble, pure'.[1]

Although named frankincense, the name is not referring to the Franks.[1]

The name of frankincense in Koine Greek (the language of the New Testament): λίβανος, líbanos (or λιβανωτός, libanōtós), is cognate with the name of Lebanon (Greek: Λίβανος); the same can be said with regard to Arabic, Phoenician, Hebrew,[3] and Vulgar Latin: lĭbănus.[4] This is postulated to be because they both derive from the word for 'white' and that the spice route went via Mount Lebanon (Koinē Greek: Λίβανος, romanized: Libanos).[3] Template:Lang-la-x-medieval derived from λίβανος or libanus. The leading "o" may have came from Latin: oleum, lit. 'oil', or from the Greek article o- or Arabic article al-.[5]

Flowers and branches of the Boswellia sacra tree, the species from which people produce most frankincense.

The trees start producing resin at about eight to 10 years old.[7] Tapping is done two to three times a year with the final taps producing the best tears due to their higher aromatic terpene, sesquiterpene and diterpene content. Generally speaking, the more opaque resins are the best quality. Cheap resin is produced in Somaliland, which is the Roman Catholic Church's major source.[8]

The main species in trade are:

Recent studies indicate that frankincense tree populations are declining, partly due to over-exploitation.[15][16] Heavily tapped trees produce seeds that germinate at only 16% while seeds of trees that had not been tapped germinate at more than 80%. In addition, burning, grazing, and attacks by the longhorn beetle have reduced the tree population.[17] Conversion (clearing) of frankincense woodlands to agriculture is also a major threat.[18]

Structure of β-boswellic acid, one of the main active components of frankincense

These are some of the chemical compounds present in frankincense:

Among various plants in the genus Boswellia, only Boswellia sacra, Boswellia serrata and Boswellia papyrifera have been confirmed to contain significant amounts of boswellic acids.[9]:10

See the following references for a comprehensive overview of the chemical compounds in different frankincense species:[9][22] 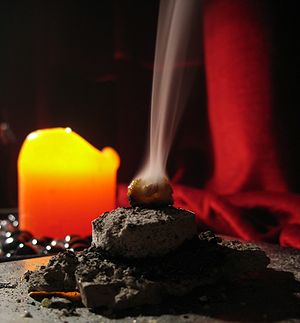 Frankincense has been traded on the Arabian Peninsula for more than 5,000 years.[22]:5 Frankincense was also traded from the Horn of Africa during the Silk Road era.[23]

The Greek historian Herodotus wrote in The History that frankincense was harvested from trees in Southern Arabia. He reported that the gum was dangerous to harvest because of winged snakes[24] that guard the trees, and that the smoke from burning storax would drive the snakes away.[25][26] Pliny the Elder also mentioned about frankincense in his Naturalis Historia.[27][28]

Frankincense was reintroduced to Western Europe by Frankish Crusaders,[citation needed] and other Western Europeans on their journeys to the Eastern Roman Empire where it was commonly used in church services. Although named frankincense, the name refers to the quality of incense brought to Western Europe, not to the Franks themselves.[1]

Southern Arabia was an exporter of frankincense in antiquity, with some of it being traded as far as China. The 13th-century Chinese writer and customs inspector Zhao Rugua wrote that: Ruxiang or xunluxiang (Chinese: 乳香 rǔ xiāng/ 薰陸香 xūn lù xiāng) comes from the three Dashi states (Chinese: 大食 dàshí - Caliphate (Arab Muslims)) of Maloba (Murbat), Shihe (Shihr), and Nufa (Dhofar), from the depths of the remotest mountains;[29] the trunk of the tree is notched with a hatchet, upon which the resin flows out, and, when hardened, turns into incense, which is gathered and made into lumps; it is transported on elephants to the Dashi ports, then on ship to Sanfoqi; which is why it was known as a product of Sanfoqi.[30] 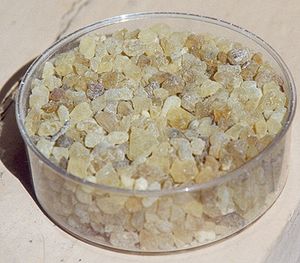 Thousands of tons of frankincense are traded every year to be used in religious ceremonies as incense in thuribles and by makers of perfumes, natural medicines, and essential oils. It can be inhaled or applied to the skin for its supposed health benefits. Most frankincense comes from Somalia, and India, but also in Oman, Yemen, and western Africa.[2]

In Somalia, frankincense is harvested in the Bari and Sanaag regions : mountains lying at the northwest of Erigavo; El Afweyn District; Cal Madow mountain range, a westerly escarpment that runs parallel to the coast; Cal Miskeed, including Hantaara and Habeeno plateau and a middle segment of the frankincense-growing escarpment; Karkaar mountains or eastern escarpment, which lies at the eastern fringe of the frankinscence escarpment.[31][16] The Habr Je'lo subclan of the Isaaq in particular were known to harvest and export frankincense from Sanaag.[32]

In Dhofar, Oman, frankincense species grow north of Salalah and were traded in the ancient coastal city of Sumhuram, now Khor Rori.[33]

In 1998, the International Union for Conservation of Nature (IUCN) warned that one of the primary frankincense species, Boswellia sacra, is "near threatened". Frankincense trees are not covered by the Convention on International Trade in Endangered Species of Wild Fauna and Flora, but experts argue that Boswellia species meet the criteria for protection. In a 2006 study, an ecologist at Wageningen University & Research claimed that, by the late-1990s, Boswellia papyrifera trees in Eritrea were becoming hard to find. In 2019, a new paper predicted a 50% reduction in Boswellia papyrifera within the next two decades. This species, found mainly in Ethiopia, Eritrea, and Sudan, accounts for about two-thirds of global frankincense production. The paper warns that all Boswellia species are threatened by habitat loss and overexploitation. Most Boswellia grow in harsh, arid regions beset by poverty and conflict. Harvesting and selling the tree's resin is one of the only sources of income for the inhabitants, resulting in overtapping.[2]

Frankincense (Boswellia spp.) is an old term for “choice incense.”[34] The use of Boswellia resin for spiritual and medicinal purposes dates back to ancient civilizations. Numerous compounds of different chemical categories were identified in the resin; the pharmacological actions of Boswellia resin are attributed to the complementary effects exerted by these compounds. The clinical studies have demonstrated the effectiveness of frankincense resin in some disease conditions like asthma, rheumatoid arthritis, irritable bowl diseases, osteoarthritis, and relapsing-remitting multiple sclerosis.[35][36] The essential oil obtained from the oleogum resin of Boswellia serrata showed antimicrobial activities.[37][38] Also, in vivo studies on animals revealed that Frankincense oleogum resin exhibits neuroprotective activity.[39][40] 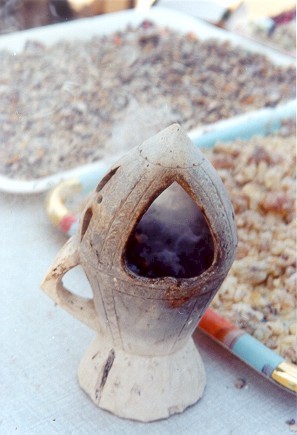 Frankincense is often prepared inside a censer, such as the meerschaum dabqaad traditionally used in Somaliland, Somalia and Djibouti.

The Egyptians cleansed body cavities in the mummification process with frankincense and natron. In Persian medicine, it is used for diabetes, gastritis and stomach ulcer.[41]

Generally the oil is also used in Abrahamic religions to cleanse the house or building of bad or evil energy - including used in exorcisms and to bless one's being (like the bakhoor commonly found in Persian Gulf cultures by spreading the fumes towards the body).

The incense offering occupied a prominent position in the sacrificial legislation of the ancient Hebrews.[42] The Book of Exodus (30:34-38) prescribes frankincense, blended with equal amounts of three aromatic spices, to be ground and burnt in the sacred altar before the Ark of the Covenant in the wilderness Tabernacle, where it was meant to be a holy offering—not to be enjoyed for its fragrance. Scholars have identified frankincense as what the Book of Jeremiah (6:20) relates was imported from Sheba during the 6th century BC Babylonian captivity.[43]

Frankincense is mentioned in the New Testament as one of the three gifts (with gold and myrrh) that the magi "from the East" presented to the Christ Child (Matthew 2:11).

In Chinese medicine, frankincense (Template:Lang-zh rǔ xiāng) along with myrrh (沒藥 mò yào) have anti-bacterial properties as well as blood-moving uses.[citation needed] It can be used topically or orally, also used in surgical and internal medicine of traditional Chinese medicine. It is used to relieve pain, remove blood stasis, promote blood circulation and treat deafness, stroke, locked jaw, and abnormalities in women's menstruation.

The essential oil of frankincense is produced by steam distillation of the tree resin. The oil's chemical components are 75% monoterpenes, sesquiterpenes, and ketones. Contrary to some commercial claims, steam distilled frankincense oils do not contain the insufficiently volatile boswellic acids (triterpenoids), although they may be present in solvent extractions. The chemistry of the essential oil is mainly monoterpenes and sesquiterpenes, such as alpha-pinene, Limonene, alpha-Thujene, and beta-Pinene with small amounts of diterpenoid components being the upper limit in terms of molecular weight.[44][45][46][47]