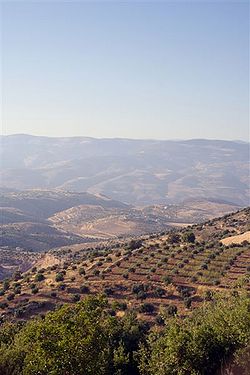 Gilead or Gilad (/ˈɡɪliəd/;[1] Hebrew: גִּלְעָד‎, Arabic: جلعاد‎ – Ǧalʻād, Jalaad) is the name of three people and two geographic places in the Bible. Gilead may mean 'hill of testimony'. If this is the case, it is likely derived from גלעד gal‛êd, which in turn comes from gal ('heap, mound, hill') and ‛êd ('witness, testimony').[2] There also exists an alternative theory that it means 'rocky region'.[3] It is now within the Kingdom of Jordan.

Gilead was a mountainous region east of the Jordan River, situated in modern-day Jordan. It is also referred to by the Aramaic name Yegar-Sahadutha, which carries the same meaning as the Hebrew Gilead, namely "heap [of stones] of testimony" (Genesis 31:47–48).[4][5] According to Easton's Bible Dictionary,[5] it refers to a region in Transjordan. The deep ravine of the river Yarmuk (the Classical-period Hieromax, modern-day Shari'at al-Manaḍirah) separated Bashan from Gilead, which was about 60 miles (97 km) in length and 20 miles (32 km) in breadth, extending from near the south end of the Lake of Gennesaret to the north end of the Dead Sea. Abarim, Pisgah, Nebo, and Peor are its mountains mentioned in Scripture. From its mountainous character, it is called the mount of Gilead (Genesis 31:25; Song 4:1). It is called also the land of Gilead (Numbers 32:1, Judges 10:4) in many translations, and sometimes simply Gilead (Genesis 37:25; Judges 10:8; Psalm 60:7). Also mentioned in Micah 7:14-15.

During the Exodus, "half Gilead" was possessed by Sihon, and the other half, separated from it by the river Jabbok, by Og, king of Bashan. After the two kings were defeated, the region of Gilead was allotted by Moses to the tribes of Gad, Reuben, and the eastern half of Manasseh (Deuteronomy 3:13; Numbers 32:40).

The name Gilead first appears in the biblical account of the last meeting of Jacob and Laban (Genesis 31:21–22). In the Book of Judges, the thirty sons of the biblical judge Jair controlled the thirty towns of Gilead (Judges 10:4), and in the First Book of Chronicles, Segub controlled twenty-three towns in Gilead (1 Chronicles 2:21–22). It was bounded on the north by Bashan, and on the south by Moab and Ammon (Genesis 31:21 KJV; Deuteronomy 3:12–17).

"Gilead" mentioned in the Book of Hosea may refer to Ramoth-Gilead, Jabesh-Gilead, or the whole Gilead region; "Gilead is a city of those who work iniquity; it is stained with blood" (Hosea 6:8).

The kingdoms Ammon and Moab sometimes expanded to include southern Gilead. King David fled to Mahanaim in Gilead during the rebellion of Absalom. Gilead is later mentioned as the homeplace of the prophet Elijah.

King Tiglath-pileser III of Assyria says he established the province of Gal'azu (Gilead).

Gilead (Arabic: جلعاد‎, Ǧalʻād or Jalaad) is an Arabic term used to refer to the mountainous land extending north and south of Jabbok. It was used more generally for the entire region east of the Jordan River. It corresponds today to the northwestern part of the Kingdom of Jordan.

Gilead may also refer to:

In Hebrew, גלעד‎ (transcribed Gilad or Ghil'ad) is used as a male given name and is often analysed as deriving from גיל‎ (gil) "happiness, joy" and עד‎ (ad) "eternity, forever"; i.e. "eternal happiness".