Gospel originally meant the Christian message,[note 1] but in the 2nd century it came to be used also for the books in which the message was set out;[2] in this sense a gospel can be defined as a loose-knit, episodic narrative of the words and deeds of Jesus of Nazareth, culminating in his trial and death and concluding with various reports of his post-resurrection appearances.[3]

The four canonical gospels of Matthew, Mark, Luke and John share the same basic outline: Jesus begins his public ministry in conjunction with that of John the Baptist, calls disciples, teaches and heals and confronts the Pharisees, dies on the cross, and is raised from the dead.[4] Each has its own distinctive understanding of Jesus and his divine role:[5] 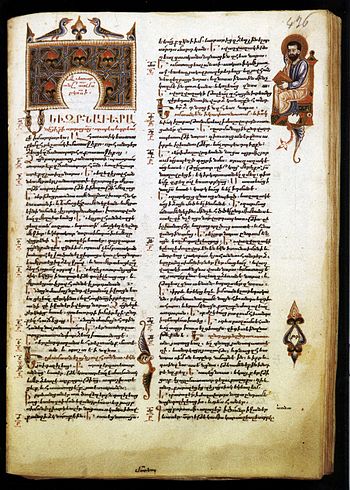 The first page of the Gospel of Mark in Armenian, by Sargis Pitsak, 14th century.

The four canonical gospels share the same basic outline of the life of Jesus: he begins his public ministry in conjunction with that of John the Baptist, calls disciples, teaches and heals and confronts the Pharisees, dies on the cross, and is raised from the dead.[4] Each has its own distinctive understanding of him and his divine role:[5] Mark never calls him "God" or claims that he existed prior to his earthly life, apparently believes that he had a normal human parentage and birth, makes no attempt to trace his ancestry back to King David or Adam, and originally had no post-resurrection appearances,[6] [7] although Mark 16:7, in which the young man discovered in the tomb instructs the women to tell "the disciples and Peter" that Jesus will see them again in Galilee, hints that the author knew of the tradition.[8] Matthew and Luke base their narratives of the life of Jesus on that in Mark, but each makes subtle changes, Matthew stressing Jesus's divine nature – for example, the "young man" who appears at Jesus' tomb in Mark becomes a radiant angel in Matthew.[9][10] Similarly, the miracle stories in Mark confirm Jesus' status as an emissary of God (which was Mark's understanding of the Messiah), but in Matthew they demonstrate divinity.[11] Luke, while following Mark's plot more faithfully than does Matthew, has expanded on the source, corrected Mark's grammar and syntax, and eliminated some passages entirely, notably most of chapters 6 and 7.[12] John, the most overtly theological, is the first to make Christological judgements outside the context of the narrative of Jesus's life.[5] Despite this, scholars recognise that their differences of detail are irreconcilable, and any attempt to harmonise them would only disrupt their distinct theological messages.[13]

Matthew, Mark and Luke are termed the synoptic gospels because they present very similar accounts of the life of Jesus. John presents a significantly different picture of Jesus's career,[14] omitting any mention of his ancestry, birth and childhood, his baptism, temptation and transfiguration.[14] John's chronology and arrangement of incidents is also distinctly different, clearly describing the passage of three years in Jesus's ministry in contrast to the single year of the synoptics, placing the cleansing of the Temple at the beginning rather than at the end, and the Last Supper on the day before Passover instead of being a Passover meal.[15] The Gospel of John is the only gospel to call Jesus God. In contrast to Mark, where Jesus hides his identity as messiah, in John he openly proclaims it.[16]

The Synoptic sources: the Gospel of Mark (the triple tradition), Q (the double tradition), and material unique to Matthew (the M source), Luke (the L source), and Mark[17]

Like the rest of the New Testament, the four gospels were written in Greek.[18] The Gospel of Mark probably dates from c. AD 66–70,[19] Matthew and Luke around AD 85–90,[20] and John AD 90–110.[21] Despite the traditional ascriptions, all four are anonymous and most scholars agree that none were written by eyewitnesses.[22] (A few conservative scholars defend the traditional ascriptions or attributions, but for a variety of reasons the majority of scholars have abandoned this view or hold it only tenuously.)[23]

In the immediate aftermath of Jesus' death his followers expected him to return at any moment, certainly within their own lifetimes, and in consequence there was little motivation to write anything down for future generations, but as eyewitnesses began to die, and as the missionary needs of the church grew, there was an increasing demand and need for written versions of the founder's life and teachings.[24] The stages of this process can be summarised as follows:[25]

Mark is generally agreed to be the first gospel;[27] it uses a variety of sources, including conflict stories (Mark 2:1–3:6), apocalyptic discourse (4:1–35), and collections of sayingsThe authors of Matthew and Luke, acting independently, used Mark for their narrative of Jesus's career, supplementing it with the collection of sayings called the Q document and additional material unique to each called the M source (Matthew) and the L source (Luke).[28][note 2] Mark, Matthew and Luke are called the synoptic gospels because of the close similarities between them in terms of content, arrangement, and language.[29] The authors and editors of John may have known the synoptics, but did not use them in the way that Matthew and Luke used Mark.[30] There is a near-consensus that this gospel had its origins as a "signs" source (or gospel) that circulated within the Johannine community (the community that produced John and the three epistles associated with the name), later expanded with a Passion narrative and a series of discourses.[31][note 3]

All four also use the Jewish scriptures, by quoting or referencing passages, or by interpreting texts, or by alluding to or echoing biblical themes.[32] Such use can be extensive: Mark's description of the Parousia (second coming) is made up almost entirely of quotations from scripture.[33] Matthew is full of quotations and allusions,[34] and although John uses scripture in a far less explicit manner, its influence is still pervasive.[35] Their source was the Greek version of the scriptures, called the Septuagint – they do not seem familiar with the original Hebrew.[36]

The oldest gospel text known is 𝔓52, a fragment of John dating from the first half of the 2nd century.[37] The creation of a Christian canon was probably a response to the career of the heretic Marcion (c. 85–160), who established a canon of his own with just one gospel, the gospel of Luke, which he edited to fit his own theology.[38] The Muratorian canon, the earliest surviving list of books considered (by its own author at least) to form Christian scripture, included Matthew, Mark, Luke and John. Irenaeus of Lyons went further, stating that there must be four gospels and only four because there were four corners of the Earth and thus the Church should have four pillars.[2][39]

Quotations related to Gospel at Wikiquote