The Gospel according to Luke (Greek: Εὐαγγέλιον κατὰ Λουκᾶν, romanized: Euangélion katà Loukân[1]), also called the Gospel of Luke, or simply Luke, tells of the origins, birth, ministry, death, resurrection, and ascension of Jesus Christ.[2] Together with the Acts of the Apostles, it makes up a two-volume work which scholars call Luke–Acts;[3] together they account for 27.5% of the New Testament.[4]

The author is anonymous;[5] the traditional view that it was Luke the Evangelist, the companion of Paul, is still occasionally put forward, but the scholarly consensus emphasises the many contradictions between Acts and the authentic Pauline letters.[6][7] The most probable date for its composition is around AD 80–110, and there is evidence that it was still being revised well into the 2nd century.[8]

Papyrus 45, a 3rd-century AD Greek papyrus of the Gospel of Luke

Autographs (original copies) of Luke and the other Gospels have not been preserved; the texts that survive are third-generation copies, with no two completely identical.[9] The earliest witnesses (the technical term for written manuscripts) for Luke's gospel fall into two "families" with considerable differences between them, the Western and the Alexandrian text-type, and the dominant view is that the Western text represents a process of deliberate revision, as the variations seem to form specific patterns.[10]

The fragment 𝔓4 is often cited as the oldest witness. It has been dated from the late 2nd century, although this dating is disputed. Papyrus 75 (= Papyrus Bodmer XIV-XV) is another very early manuscript (late 2nd - early 3rd century), and it includes an attribution of the gospel to Luke.

The oldest complete texts are the 4th century Codex Sinaiticus and Vaticanus, both from the Alexandrian family; Codex Bezae, a 5th- or 6th-century Western text-type manuscript that contains Luke in Greek and Latin versions on facing pages, appears to have descended from an offshoot of the main manuscript tradition, departing from more familiar readings at many points.

Codex Bezae shows comprehensively the differences between the versions which show no core theological significance. [11][note 1]

The gospel of Luke and the Acts of the Apostles make up a two-volume work which scholars call Luke–Acts.[3] Together they account for 27.5% of the New Testament, the largest contribution by a single author, providing the framework for both the Church's liturgical calendar and the historical outline into which later generations have fitted their idea of the story of Jesus.[4]

The author is not named in either volume.[5] According to a Church tradition, first attested by Irenaeus (c. 130 – c. 202 AD), he was the Luke named as a companion of Paul in three of the Pauline letters, but "a critical consensus emphasizes the countless contradictions between the account in Acts and the authentic Pauline letters."[6] An example can be seen by comparing Acts' accounts of Paul's conversion[12] with Paul's own statement that he remained unknown to Christians in Judea after that event (Galatians 1:17–24).[13] Luke admired Paul, but his theology was significantly different from Paul's on key points and he does not (in Acts) represent Paul's views accurately.[14] He was educated, a man of means, probably urban, and someone who respected manual work, although not a worker himself; this is significant, because more high-brow writers of the time looked down on the artisans and small business-people who made up the early church of Paul and were presumably Luke's audience.[15]

The eclipse of the traditional attribution to Luke the companion of Paul has meant that an early date for the gospel is now rarely put forward.[6] Most scholars date the composition of the combined work to around 80–90 AD, although some others suggest 90–110,[16] and there is textual evidence (the conflicts between Western and Alexandrian manuscript families) that Luke–Acts was still being substantially revised well into the 2nd century.[8]

Luke was written to be read aloud to a group of Jesus-followers gathered in a house to share the Lord's supper.[17] The author assumes an educated Greek-speaking audience, but directs his attention to specifically Christian concerns rather than to the Greco-Roman world at large.[18] He begins his gospel with a preface addressed to "Theophilus":[19] the name means "Lover of God," and could mean any Christian though most interpreters consider it a reference to a Christian convert and Luke's literary patron.[20] Here he informs Theophilus of his intention, which is to lead his reader to certainty through an orderly account "of the events that have been fulfilled among us."[15] He did not, however, intend to provide Theophilus with a historical justification of the Christian faith – "did it happen?" – but to encourage faith – "what happened, and what does it all mean?"[21]

Following the author's preface addressed to his patron and the two birth narratives (John the Baptist and Jesus), the gospel opens in Galilee and moves gradually to its climax in Jerusalem:[22]

The structure of Acts parallels the structure of the gospel, demonstrating the universality of the divine plan and the shift of authority from Jerusalem to Rome:[23]

The gospel – the acts of Jesus:

The acts of the apostles 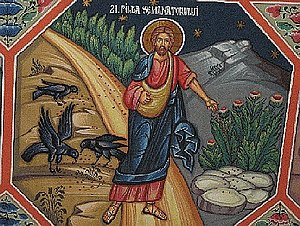 Luke's theology is expressed primarily through his overarching plot, the way scenes, themes and characters combine to construct his specific worldview.[24] His "salvation history" stretches from the Creation to the present time of his readers, in three ages: first, the time of "the Law and the Prophets", the period beginning with Genesis and ending with the appearance of John the Baptist;[25] second, the epoch of Jesus, in which the Kingdom of God was preached;[26] and finally the period of the Church, which began when the risen Christ was taken into Heaven, and would end with his second coming.[27]

Luke's understanding of Jesus – his Christology – is central to his theology. One approach to this is through the titles Luke gives to Jesus: these include, but are not limited to, Christ (Messiah), Lord, Son of God, and Son of Man.[28] Another is by reading Luke in the context of similar Greco-Roman divine saviour figures (Roman emperors are an example), references which would have made clear to Luke's readers that Jesus was the greatest of all saviours.[29] A third is to approach Luke through his use of the Old Testament, those passages from Jewish scripture which he cites to establish that Jesus is the promised Messiah.[30] While much of this is familiar, much also is missing: for example, Luke makes no clear reference to Christ's pre-existence or to the Christian's union with Christ, and makes relatively little reference to the concept of atonement: perhaps he felt no need to mention these ideas, or disagreed with them, or possibly he was simply unaware of them.[31]

Even what Luke does say about Christ is ambiguous or even contradictory.[31] For example, according to Luke 2:11 Jesus was the Christ at his birth, but in Acts 10:37-38[32] he becomes Christ at the resurrection, while in Acts 3:20 it seems his messiahship is active only at the parousia, the "second coming"; similarly, in Luke 2:11 he is the Saviour from birth, but in Acts 5:31 he is made Saviour at the resurrection; and he is born the Son of God in Luke 1:32-35,[33] but becomes the Son of God at the resurrection according to Acts 13:33[34].[35] Many of these differences may be due to scribal error, but others were deliberate alterations to doctrinally unacceptable passages, or the introduction by scribes of "proofs" for their favourite theological tenets.[36] An important example of such deliberate alterations is found in Luke's account of the baptism of Jesus, where virtually all the earliest witnesses have God saying, "This day I have begotten you."[37] (Luke has taken the words of God from Psalm 2, an ancient royal adoption formula in which the king of Israel was recognised as God's elect).[37] This reading is theologically difficult, as it implies that God is now conferring status on Jesus that he did not previously hold.[37] It is unlikely, therefore, that the more common reading of Luke 3:22[38] (God says to Jesus, "You are my beloved son, with you I am well pleased") is original.[37]

The Holy Spirit, the Christian community, and the Kingdom of God

The Holy Spirit plays a more important role in Luke–Acts than in the other gospels. Some scholars have argued that the Spirit's involvement in the career of Jesus is paradigmatic of the universal Christian experience, others that Luke's intention was to stress Jesus' uniqueness as the Prophet of the final age.[39] It is clear, however, that Luke understands the enabling power of the Spirit, expressed through non-discriminatory fellowship ("All who believed were together and had all things in common"), to be the basis of the Christian community.[40] This community can also be understood as the Kingdom of God, although the kingdom's final consummation will not be seen till the Son of Man comes "on a cloud" at the end-time.[41]

Christians vs. Rome and the Jews

See also: History of the Jews in the Roman Empire

Luke needed to define the position of Christians in relation to two political and social entities, the Roman Empire and Judaism. Regarding the Empire Luke makes clear that, while Christians are not a threat to the established order, the rulers of this world hold their power from Satan, and the essential loyalty of Christ's followers is to God and this world will be the kingdom of God, ruled by Christ the King.[42] Regarding the Jews, Luke emphasises the fact that Jesus and all his earliest followers were Jews, although by his time the majority of Christ-followers were gentiles; nevertheless, the Jews had rejected and killed the Messiah, and the Christian mission now lay with the gentiles.[43]