Herodias (Greek: Ἡρῴδιάς, Hērǭdiás; c. 15 BC – after 39 AD) was a princess of the Herodian dynasty of Judaea during the time of the Roman Empire.[1] Historical accounts connect her with John the Baptist's execution. 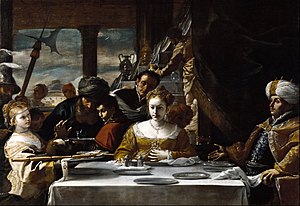 Herod the Great executed his sons, Alexander and Aristobulus IV, in 7 BC, and engaged Herodias to Herod II (born ca. 27 BC; died 33 AD),[2] her half-uncle. The marriage was opposed by Antipater II, Herod the Great's eldest son, and so Herod demoted Herod II to second in line to the throne. Antipater's execution in 4 BC for plotting to poison his father left Herod II as first in line, but his mother's knowledge of the poison plot, and failure to stop it, led to his being dropped from this position in Herod I's will just days before he died.

The Gospel of Mark states that Herodias was married to Philip, therefore some scholars have argued his name was Herod Philip (not to be confused with Philip the Tetrarch, whom some writers call Herod Philip II). Many scholars dispute this, however, and believe it was an error, a theory supported by the fact that the Gospel of Luke drops the name Philip.[3][4] Because he was the grandson of the high priest Simon Boethus he is sometimes described as Herod Boethus, but there is no evidence he was called by that name.[5]

There was one daughter from this marriage, Salome. Herodias later divorced Herod II, although it is unclear when they were divorced. According to the historian Josephus:

Herodias took upon her to confound the laws of our country, and divorced herself from her husband while he was alive, and was married to Herod Antipas[6]

Herodias' second husband was Herod Antipas (born before 20 BC; died after 39 AD) half-brother of Herod II (her first husband). He is best known today for his role in events that led to the executions of John the Baptist and Jesus of Nazareth.

Antipas divorced his first wife Phasaelis, the daughter of King Aretas IV of Nabatea, in favor of Herodias. According to biblical scholars, the Gospel of Matthew[7] and the Gospel of Luke,[8] it was this proposed marriage which John the Baptist publicly criticized. Aside from provoking his conflict with the Baptist, the tetrarch's divorce added a personal grievance to previous disputes with Aretas over territory on the border of Perea and Nabatea.[citation needed]

The result was a war that proved disastrous for Antipas; a Roman counter-offensive was ordered by Tiberius, but abandoned upon that emperor's death in 37 AD. In 39 AD Antipas was accused by his nephew Agrippa I of conspiracy against the new Roman emperor Caligula, who sent him into exile in Gaul. Accompanied there by Herodias, he died at an unknown date. It is uncertain if Herodias had any children by her second husband, Herod Antipas.[citation needed] 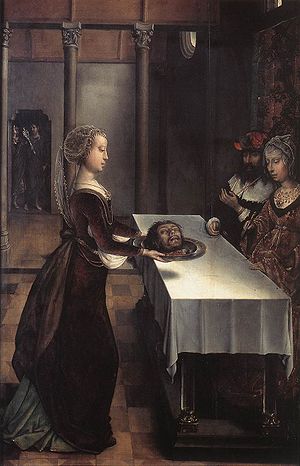