From Biblical History & Civilization
Jump to navigation Jump to search
Not to be confused with Jehoash of Israel.

Jehoash (Hebrew: יְהֹואָשׁ, Yəhōʾāš, “Jehovah-given”; Greek: Ιωας; Latin: Joas), also known as Joash (in King James Version), Joas (in Douay–Rheims) or Joás (Hebrew: יֹואָשׁ, Yōʾāš),[1] was the eighth king of Judah, and the sole surviving son of Ahaziah after the massacre of the royal family ordered by his grandmother, Athaliah. His mother was Zibiah of Beersheba. Jehoash was 7 years old when his reign began, and he reigned for 40 years.[2] (2 Kings 12:1,2 Chronicles 24:1) He was succeeded by his son, Amaziah of Judah. He is said to have been righteous "all the days of Jehoiada the priest" (2 Chronicles 24:2) but to have deviated from fidelity to Yahweh after Jehoiada's death (2 Chronicles 24:17–19).

The Gospel of Matthew does not list Jehoash of Judah in the genealogy of Jesus, Jehoash being one of four kings of Judah so omitted, the other three being Ahaziah, Amaziah, and Jehoiakim. 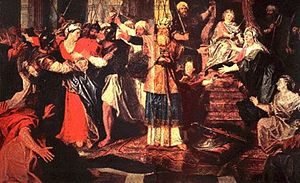 Athaliah Expelled from the Temple by Antoine Coypel, 1699

According to the Hebrew Bible, following the death of his father, Ahaziah, Jehoash was spared from the rampages of Ahaziah's mother, Athaliah, by Jehoash's paternal aunt, Jehosheba, who was married to the high priest, Jehoiada.[2][4][5] After hiding him in the Temple for seven years, Jehoiada had Jehoash crowned and anointed king in a coup d'état against Athaliah, who had usurped the Throne of David. Athaliah was killed during the coup.[6][7][8][9][10]

After Jehoash was crowned, the covenant was renewed between God, the king, and the nation. The Tyrian cult of Baal, which was introduced under Jehoram and strengthened under Athaliah, was suppressed. Mattan, the priest of Baal, was killed as altars to Baal were destroyed. For the first time in Judah's history, the Temple in Jerusalem and its priesthood achieved national importance.[11][12][10]

According to the accounts in 2 Kings 12, Jehoash directed that the money paid by worshippers at the Temple should be used to fund its repair. By the 23rd year of his reign, he was aware that the priests had failed to implement a restoration program, and so made his own arrangements, funded by popular contributions, to restore the temple to its original condition and further strengthen it. The account in 2 Chronicles 24 follows the account in 2 Kings 12,[13] but diverges from it in treating the popular contributions "as a form of taxation, similar to the tax collected in the desert in connection with the tabernacle".[14]

After Jehoiada died, Jehoash listened to the princes of Judah instead of the priests. This led him to abandon worshipping Yahweh and turning instead to idols and the Asherim as previous kings of Israel did. 2 Chronicles 24 narrates how Jehoash son-in-law the prophet Zechariah, Jehoiada's son and successor, rebuked them for forsaking God, which resulted in Jehoash ordering his execution by stoning.[15] The author of the Books of Chronicles criticizes this cruel act strongly. "Thus Joash the king remembered not the kindness which Jehoiada his father had done to him, but slew his son. And when he died, he said, The LORD look upon it, and require it". The author also attributes Jehoash's deeds to the oppression suffered at the hands of Aramean invaders as God's judgment.[16]

According to the account in 2 Kings 12, when King Hazael of Syria marched on Jerusalem, Jehoash surrendered all the gold of the royal and sacred treasuries, thereby persuading him to call off his attack,[17] but according to the account in 2 Chronicles, the Syrian army "destroyed all the leaders of the people from among the people, and sent all their spoil to the king of Damascus",[18] "execut[ing] judgment against Joash" and leaving him severely wounded.[10]

Jehoash was eventually assassinated by his own servants at Beth Millo,[19] and his assassination is portrayed as an act of revenge for the blood of Zechariah, the son of Jehoiada.[20] Jehoash was buried together with his fathers in the City of David,[21] although he was "not (buried) in the sepulchres of the kings".[22] He was succeeded as king by his son Amaziah (אמציה),

The rabbis of the Talmud declared, based upon a rabbinic tradition, that Prophet Amoz was the brother of Amaziah (אמציה), the king of Judah at that time (and, as a result, that Prophet Isaiah himself was a member of the royal family).

The extermination of the male descendants of David was considered divine retribution for his responsibility in the extermination of the priests by Saul, who had commanded his servant Doeg the Edomite to perform this task (comp. 1 Sam. 22:17–23). Jehoash escaped death because in the latter case one priest, Abiathar, survived (Sanh. 95b). The hiding-place of Jehoash was, according to R. Eleazar, one of the chambers behind the Holy of Holies; according to R. Samuel b. Naḥman, it was one of the upper chambers of the Temple (Cant. R. i. 66).[23]

Although a king who is the son of a king need not be anointed, an exception was made in the case of Jehoash, as well as of Solomon[24] and Jeoahaz,[25] the succession of each of whom was contested. (Lev. R. x. 8) Particular mention is made of the crown placed on Joash's head (2 Kings 11:12), because it fitted exactly, signifying that he was qualified for kingship. (Ab. Zarah 44a)

Joash was one of the four men who pretended to be gods. He was persuaded thereto particularly by the princes, who said to him. "Wert thou not a god thou couldst not come out alive from the Holy of Holies" (Ex R. viii. 3). He was assassinated by two of his servants, one of whom was the son of an Ammonite woman and the other the offspring of a Moabite (2 Chron. 24:26); for God said: "Let the descendants of the two ungrateful families chastise the ungrateful Joash" (Yalk., Ex. 262). Moab and Ammon were the two offspring of Lot's incest with his two daughters as described in Gen. 19:30–38.

In 2001, an unprovenanced inscription was published, known as the Jehoash Inscription or Temple Inscription, which appears to be a record of repairs made to Solomon's Temple during Jehoash's reign. The tablet consists of 15 lines of Hebrew text inscribed on a piece of tabular black stone.[26] Following extensive scientific tests, the Israeli archaeological authorities declared it to be a forgery and attempted but failed to prosecute the perpetrator; today a number of experts maintain that it is not a forgery.[27]