Jotham or Yotam (Hebrew: יוֹתָם‎, Modern: Yōtam, Tiberian: Yōṯām; Greek: Ιωαθαμ, romanized: Ioatham; Latin: Joatham)[1] was the eleventh king of Judah, and son of King Uzziah and Jerusha (or Jerushah), daughter of Zadok. Jotham was 25 when he began his reign, and reigned for 16 years.[2] Edwin R. Thiele concluded that his reign commenced as a coregency with his father, which lasted for 11 years. Because his father Uzziah was afflicted with tzaraath after he went into the Temple to burn incense, Jotham became governor of the palace and the land at that time, i.e. coregent, while his father lived in a separate house as a leper.

The Gospel of Matthew lists Jotham of Judah in the genealogy of Jesus. The archeologist Nelson Glueck found an imprint of king Jotham near Eilat.[4] Also near Eilat there is a wadi called "Yatam wadi".

Jotham inherited a strong government, well officered and administered. He is recorded as having built the High or Upper Gate of the Temple of Jerusalem, identified by Matthew Poole as the New Gate mentioned in Jeremiah 36:10.[5] "He built cities in the mountains of Judah, and in the forests he built castles and towers."[6]

2 Kings 15 mentions that Jotham fought wars against Rezin, king of the Arameans, and Pekah, king of Israel (15:37). He also defeated the Ammonites, who paid him an immense annual tribute. But the increasing corruption of the northern kingdom began to permeate Judah.[6]

Jotham was a contemporary with the prophets Isaiah, Hosea, Amos, and Micah, from whose advice he benefited. 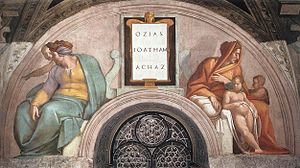 Uzziah, Ioatham and Achaz by Michelangelo Buonarroti, Sistine Chapel lunette, Vatican City. Traditionally Ioatham is the man in green on the left and the child with him is his son Achaz.

Biblical chronologies for the two Israelite kingdoms in the 8th century BC are both profuse and perplexing. Some of the reign lengths or synchronisms are given from the start of a sole reign, while others are given from the start of a coregency, or, in the case of Pekah, from the start of a rival reign. Thiele maintained that the key to understanding these records lies in a proper appreciation of the growing threat from Assyria that both kingdoms faced.[7] In 754 BC, Ashur-nirari V led the Assyrians against Arpad in northern Aram.[8] His successor Tiglath-Pileser III warred against Arpad in the years 743 to 740 BC, capturing the city after three years.[9] In face of this threat, Rezin of Damascus made an alliance with Pekah of Israel, and the two were therefore enemies of the pro-Assyrian king of Judah, Ahaz (Isaiah 7:1). Meanwhile, Menahem, ruling in Samaria, sent tribute to Tiglath-Pileser (Biblical Pul)[10] in order to "strengthen his hold on the kingdom," (2 Kings 15:19), apparently against his anti-Assyrian rival Pekah.[11] According to Thiele, it is the existence of strong pro-Assyrian and anti-Assyrian factions in both Israel and Judah that explains the way the chronological data for the time were recorded:

When Jotham began his rule in Judah his reign was synchronized with that of Pekah and not with Menahem, although both were then on their thrones. This points to close Judean ties with Pekah than with Menahem, and a common resistance against the Assyrian threat could well have been the cause. The fact that Jotham's accession in 751/50 is synchronized with the years of Pekah provides strong evidence that Pekah was then ruling as king. And the fact that Ahaz's accession in 736/35 is likewise synchronized with a reign of Pekah that began in 752/51 provides further proof that it was at that time that Pekah began his reign. These synchronisms of II Kings 15:32 and 16:1 are not artificial and they are not late. No scribe of a later period unacquainted with the historical details of the time would, or could, have invented them.[12]

In Judah, the growing Assyrian pressure strengthened the hand of those who sought accommodation to the enemy from the north, resulting in a change of leadership:

In 736 and 735 Tiglath-pileser was again in the northwest, in the regions of Mount Nal and Urartu. Many in Judah would no doubt think that the time had come to submit or be crushed. In 735 it is altogether likely that a pro-Assyrian group felt itself strong enough to force Jotham into retirement and to place Ahaz on the throne. Although Jotham continued to live to his (Ahaz') twentieth year (II Kings 15:30), 732/31, it was Ahaz who directed affairs from 735.[7]

Thiele therefore explained the reason for the complexity of the chronological data for this time by taking into account the historical background. He then found that the regnal years for Judah and Israel that can be constructed from the Biblical texts fit into the known movements of the Assyrian kings during this time.

The calendars for reckoning the years of kings in Judah and Israel were offset by six months, that of Judah starting in Tishri (in the fall) and that of Israel in Nisan (in the spring). Cross-synchronizations between the two kingdoms therefore often allow narrowing of the beginning and/or ending dates of a king to within a six-month range. For Jotham, the Scriptural data allow the narrowing of the beginning of his coregency with Uzziah as occurring some time in the six-month interval on or following Nisan 1, 750 BCE. In terms of Judean reckoning, this would be in the year that started in Tishri of 751 BCE. His sole reign began in the year that started on Tishri 1, 740 BCE, and its end was in the six-month interval that started on Nisan 1, 735 BCE. His death occurred in the year that started in Tishri, 732 BCE.

In the mid-1990s a very important bulla showed up on the antiquities market. A bulla is a flattened lump of hardened clay bearing the impression of a seal. They were used to seal papyrus documents. The papyrus would be folded and tied with a string. A soft lump of clay would then be placed on the string and impressed with a signet ring or pendant bearing the seal of the sender. The clay would harden, thus securing the contents of the document. This bulla measures a mere 2/5” wide. The back of the bulla still bears the imprint of the papyrus it once sealed, as well as the double string which held it together. It even contains a fingerprint on the left edge. Like many bullae, it was preserved due to fire. When a city was burned by an invading army, it would cause the destruction of most artifacts, but would cause the bullae to be preserved. Just as in a kiln, these bullae were baked to perfection. What makes this bulla remarkable is its inscription. It reads: “Belonging to Ahaz (son of) Yehotam, King of Judah”. Given the process that created and preserves bullae, they are virtually impossible to forge, so most scholars believe this bulla to be authentic. It bears the seal of King Ahaz of Judah.[13]