Judea (/dʒuːˈdiːə/; Hebrew: יהודה‎, Standard Yəhūda Tiberian Yehūḏā; Greek: Ἰουδαία Ioudaia; Latin: Iūdaea), sometimes spelled in its original Latin form Iudaea to distinguish it from the geographical region of Judea, was a Roman province which incorporated the regions of Judea, Samaria and Idumea, and extended over parts of the former regions of the Hasmonean and Herodian kingdoms of Judea. It was named after Herod Archelaus's Tetrarchy of Judea, but the Roman province encompassed a much larger territory. The name "Judea" was derived from the Kingdom of Judah of the 6th century BCE.

Following the deposition of Herod Archelaus in 6 CE, Judea came under direct Roman rule,[1] during which time the Roman governor was given authority to punish by execution. The general population also began to be taxed by Rome.[2] The province of Judea was the scene of unrest at its founding in 6 CE during the Census of Quirinius, the crucifixion of Jesus circa 30–33 CE, and several wars, known as the Jewish–Roman wars, were fought during its existence. The Second Temple of Jerusalem was destroyed by the Romans in 70 CE near the end of the First Jewish–Roman War, and the Fiscus Judaicus was instituted. After the Bar Kokhba revolt (132–135), the Roman Emperor Hadrian changed the name of the province to Syria Palaestina and the name of the city of Jerusalem to Aelia Capitolina, which certain scholars conclude was an attempt to disconnect the Jewish people from their homeland.[3][4] 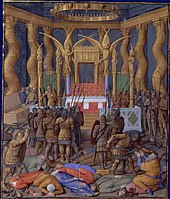 Pompey in the Temple of Jerusalem, by Jean Fouquet

The first intervention of Rome in the region dates from 63 BCE, following the end of the Third Mithridatic War, when Rome established the province of Syria. After the defeat of Mithridates VI of Pontus, Pompey sacked Jerusalem and installed Hasmonean prince Hyrcanus II as Ethnarch and High Priest but not as king. Some years later Julius Caesar appointed Antipater the Idumaean, also known as Antipas, as the first Roman Procurator. Antipater's son Herod was designated "King of the Jews" by the Roman Senate in 40 BCE[5] but he did not gain military control until 37 BCE. During his reign the last representatives of the Hasmoneans were eliminated, and the huge port of Caesarea Maritima was built.[6]

Herod died in 4 BCE, and his kingdom was divided among three of his sons, two of whom (Philip and Herod Antipas) became tetrarchs ('rulers of a quarter part'). The third son, Archelaus, became an ethnarch and ruled over half of his father's kingdom.[7] One of these principalities was Judea, corresponding to the territory of the historic Judea, plus Samaria and Idumea.

Archelaus ruled Judea so badly that he was dismissed in 6 CE by the Roman emperor Augustus, after an appeal from his own population. Herod Antipas, ruler of Galilee and Perea from 4 BCE was in 39 CE dismissed by Emperor Caligula. Herod's son Philip ruled the northeastern part of his father's kingdom.[8] 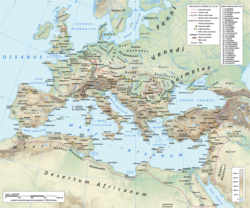 The Roman empire in the time of Hadrian (ruled 117–138 CE), showing, in western Asia, the Roman province of Judea. 1 legion deployed in 125.

Revolt and removal of Herod Archelaus

Following the death of Herod the Great, the Herodian Kingdom of Judea was divided into the Herodian Tetrarchy, jointly ruled by Herod's sons and sister: Herod Archelaus (who ruled Judea, Samaria and Idumea), Herod Philip (who ruled Batanea, Trachonitis as well as Auranitis), Herod Antipas (who ruled Galilee and Perea) and Salome I (who briefly ruled Jamnia).

A messianic revolt erupted in Judea in 4 CE because of Archelaus's incompetence; the revolt was brutally crushed by the Legate of Syria, Publius Quinctilius Varus, who occupied Jerusalem and crucified 2000 Jewish rebels.[9][10]

Because of his failure to properly rule Judea, in 6 CE Archelaus was removed from his post by Emperor Augustus and Judea, Samaria and Idumea came under direct Roman administration.[11]

The Judean province did not initially include Galilee, Gaulanitis (today's Golan), nor Peraea or the Decapolis. Its revenue was of little importance to the Roman treasury, but it controlled the land and coastal sea routes to the "bread basket" of Egypt and was a buffer against the Parthian Empire. The capital was at Caesarea Maritima,[12] not Jerusalem.

Augustus appointed Publius Sulpicius Quirinius to the post of Legate of Syria and he conducted the first Roman tax census of Syria and Judea, which triggered the revolt of Judas of Galilee; the revolt was quickly crushed by Quirinius.[13]

Judea was not a senatorial province, nor an imperial province, but instead was a "satellite of Syria"[14] governed by a prefect who was a knight of the Equestrian Order (as was that of Roman Egypt), not a former consul or praetor of senatorial rank. Quirinius appointed Coponius as first prefect of Judea[15]

Still, Jews living in the province maintained some form of independence and could judge offenders by their own laws, including capital offenses, until c. 28 CE.[16] Judea in the early Roman period was divided into five administrative districts with centers in Jerusalem, Gadara, Amathus, Jericho, and Sepphoris.[17]

In 30-33 CE, Roman prefect Pontius Pilate, at the request of the Jewish authorities, had Jesus of Nazareth crucified on the charge of sedition, an act that led to the birth of Christianity.[18][19][20] In 36 CE another messianic revolt erupted near Mount Gerizim, under the lead of a Samaritan Jew, and was quickly crushed by Pilate; the Samaritans complained against Pilate's brutality to the Legate of Syria Lucius Vitellius the Elder, who removed Pilate from his post and sent him to Rome to account, replacing him with an acting prefect called Marcellus.[21] 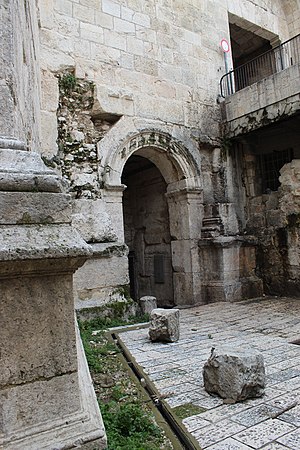 In 37 CE, Emperor Caligula ordered the erection of a statue of himself in the Jewish Temple of Jerusalem,[22] a demand in conflict with Jewish monotheism.[23] The Legate of Syria, Publius Petronius, fearing civil war if the order was carried out, delayed implementing it for nearly a year.[24] King Herod Agrippa I finally convinced Caligula to reverse the order.[25] Caligula later issued a second order to have his statue erected in the Temple of Jerusalem, but he was murdered before the statue reached Jerusalem and his successor Claudius rescinded the order.[26] The "Crisis under Caligula" has been proposed as the first open break between Rome and the Jews.[27]

Between 41 and 44 CE, Judea regained its nominal autonomy, when Herod Agrippa was made King of the Jews by the emperor Claudius, thus in a sense restoring the Herodian dynasty, although there is no indication that Judea ceased to be a Roman province simply because it no longer had a prefect. Claudius had decided to allow, across the empire, procurators, who had been personal agents to the Emperor often serving as provincial tax and finance ministers, to be elevated to governing magistrates with full state authority to keep the peace. He may have elevated Judea's procurator to imperial governing status because the imperial legate of Syria was not sympathetic to the Judeans.[28]

Following Agrippa's death in 44, the province returned to direct Roman control, incorporating Agrippa's personal territories of Galilee and Peraea, under a row of procurators. Nevertheless, Agrippa's son, Agrippa II was designated King of the Jews in 48. He was the seventh and last of the Herodians.

Between the years 66-70 follows the Great Revolt.

From 70 until 135 Judea's rebelliousness required a governing Roman legate capable of commanding legions. Because Agrippa II maintained loyalty to the Empire, the Kingdom was retained until he died, either in 93/94 or 100, when the area returned to complete, undivided Roman control. 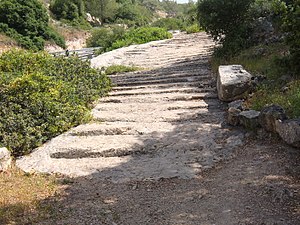