From Biblical History & Civilization
Jump to navigation Jump to search
For other uses, see Kidron (disambiguation). 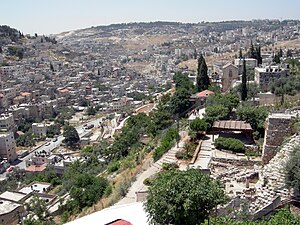 Kidron Valley viewed from the Old City of Jerusalem, with Millo in the lower bottom.

The Kidron Valley (classical transliteration, Cedron, from Hebrew: נחל קדרון‎, Naḥal Qidron, literally Qidron River; also Qidron Valley)[1][2][3][4] is the valley originating slightly northeast of the Old City of Jerusalem, which then separates the Temple Mount from the Mount of Olives. It continues in a general south-easterly direction through the Judean desert in the West Bank, reaching the Dead Sea near the settlement of Ovnat, and descending 4,000 feet (1,200 m) along its 20-mile (32 km) course. The ancient Mar Saba ('Saint Sabbas') monastery is located in the lower part of the valley. Other names include Arabic: وادي الجوز‎, Wadi el-Joz, 'Valley of the Walnut', for the upper segment near the Temple Mount; and Wadi en-Nar, 'Fire Valley', for the rest of it – with at least the segment at Mar Saba monastery also known in the 19th century as Wadi er-Rahib, 'Monk's Valley'.

In its upper part, the neighbourhood of Wadi al-Joz bears the valley's Arabic name.[5] The settlement Kedar, located on a ridge above the valley, is named after the valley's Hebrew name.

The Hebrew Bible calls the upper course Emek Yehoshafat, the "Valley of Josaphat". It appears in Jewish eschatologic prophecies, which include the return of Elijah, followed by the arrival of the Messiah, and the War of Gog and Magog and Judgment Day.[5] 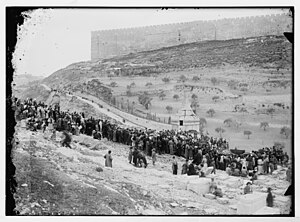 Dry plate photograph of Jews gathering at Absalom's Tomb in the Kidron Valley, early 20th century. View towards the south-west from the Jewish cemetery, with the south-eastern corner of Temple Mount in the upper background.

The upper Kidron Valley holds Jerusalem's most important cemetery from the First Temple period, the Silwan necropolis, assumed to have been used by the highest-ranking officials residing in the city, with rock-cut tombs dating between the 9th and 7th centuries BCE.[6]

The upper Kidron Valley segment north of the Old City was one of the main burial grounds of Jerusalem in the Second Temple period, where hundreds of tombs have survived until today, while the segment east of, and opposite the Temple Mount, boasts several excellently preserved monumental tombs from the same period.[7] Several of the Second Temple period tombs were also used later in time, either as burial or as shelters for hermits and monks of the large monastic communities which inhabited the Kidron Valley during the Byzantine Empire period (4th-7th century).[7][8] The ancient tombs in this area attracted the attention of ancient travelers, most notably Benjamin of Tudela.[9]

A source of confusion is the fact that the modern name "Kidron Valley" (Nahal Kidron in Hebrew) applies to the entire length of a long wadi, which starts north of the Old City of Jerusalem and ends at the Dead Sea, while the biblical names Nahal Kidron, Emek Yehoshafat, King’s Valley etc. might refer to certain parts of this valley located in the immediate vicinity of ancient Jerusalem, but not to the entire wadi, and certainly not to the long segment crossing the Judean desert. Similarly, in Arabic every more substantial wadi has many names, each applied to a certain distinct segment of its course.

The Hebrew name Qidron is derived from the root qadar, "to be dark", and may be meant in this context as "dusky".[10]

In Christian tradition the similarity between the Greek word for cedar, κέδρος (kedros), and the Greek name of the valley as used in the Septuagint, Kedron, has led to the Qidron Valley being wrongly called "Valley of the Cedars".[11]

Biblical commentator Adam Clarke claims that the Valley of Judgment is a symbolic place.[13]

In the times of the Old Testament kings, the Kidron Valley was identified with, at least in part, the King's Garden; the kings owned land in the area.[9] That the upper Kidron Valley was also known as the King's Valley, in which Absalom set up his monument or "pillar" (see 2 Samuel 18:18; no connection to the much later "Absalom's Pillar"), is problematic. The Bible does not make this identification explicit, and the association can only be inferred as associated with En-rogel, which is farther down the Kidron Valley towards the desert.[14]

The name 'King's Valley' may be derived from its location just east of the palace of David in the City of David on the western slopes of the Kidron Valley and south of where the platform was built.[15] 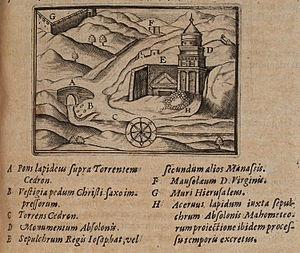 Jan van Cootwijk, folio from the Itinerary of Jerusalem and Syria: Kidron Valley with Jesus' footprints near the bridge, Absalom's pillar (right), and the Tomb of the Virgin in the background. Antwerp, 1619.

Absalom's Tomb consists of two parts. First, a lower cube hewn out of the bedrock, decorated with engaged Ionic columns bearing a Doric frieze and crowned by an Egyptian cornice.[7] This part of the monument contains a small chamber with an entrance and two arcosolia (arched funeral niches) and constitutes the actual tomb.[7] The second part, built of ashlars, is placed on top of the rock-hewn cube. It consists of a square pedestal carrying a round drum, itself topped by a conical roof. The cone is slightly concave and is crowned by an Egyptian-style lotus flower. The upper part has the general shape of a tholos[5] and is interpreted as a nefesh or monument for the tomb below, and possibly also for the adjacent "Cave of Jehoshaphat". The "Pillar of Absalom" is dated to the 1st century CE.[7][16]

Literally, the word nefesh means 'soul', but in a funerary context it is the term applied to a form of funerary monument. In descriptions of the tombs of the Jewish nobility, the pyramid shape is also emphasized as the mark of a tomb. This would imply that nefesh and pyramid were synonymous. The Jewish tombs in the Kidron Valley are the best examples of this form of nefesh.[17] They appear as a rectangular, pyramid-capped monument. Similar forms of the nefesh decorate ossuaries, with the addition of a dome-capped column. In Jerusalem the nefesh as a tomb monument stood either above or beside the tomb; set on steps or on a base.[16]

It was in this valley where King Jehoshaphat is thought to have overthrown the enemies of Israel (2 Chr. 20:26).

King David fled through the Kidron Valley during the rebellion of Absalom (2 Samuel 15:23).[18]

Chapters 29, 30 and 31 of 2 Chronicles (2 Chronicles 29-31) cover King Hezekiah's call for the sanctification of the ministers of the Lord, the purification of unclean things, an invitation to all Israel and Judah to celebrate Passover in Jerusalem, and liturgical reforms. During the reforms of King Hezekiah around 700 BCE, as part of the ritual cleaning of the Temple, the priests removed the unclean items from the inner part of the Temple to the courts, and the Levites carried the unclean items to Wadi Kidron (2 Chronicles 29:16).

The Book of Joel mentions that God will assemble all nations in the "Valley of Jehoshaphat" (Joel 3:2, Joel 3:12).

According to the New Testament, Jesus crossed the valley many times travelling between Jerusalem and Bethany.[18] The valley contains the Garden of Gethsemane, where Jesus prayed the night before he was executed. The name Kidron was mentioned in John 18:1.

The Akeldma Tombs were discovered in 1989 at theconfluence of the Kidron and Hinnom Valleys, south of Jerusalem's Old City, and were excavated and published by archaeologists Gideon Avni and Zvi Greenhut.[19] In 1989, the Jerusalem Municipality conducted routine development work in the area. Upon widening a narrow street near one of the approaches to the Silwan village, bulldozers uncovered a number of square openings hewn into rock. The Israel Antiquities Authority immediately stopped the road construction. After uncovering the underground spaces, archaeologists found themselves standing inside large burial complexes which appeared intact. Moving carefully from one chamber to another, flashlights revealed an abundance of artifacts scattered on the floors, pottery and glass vessels, oil lamps and many ornamental ossuaries. The three large caves proved to be part of an extensive Jewish burial ground in use at the end of the Second Temple period, which terminated in the year 70 AD, when Jerusalem was conquered and the Temple destroyed by the Roman legions.[20][21]

As of 2010, there is a controversial proposal to reconstruct part of the Kidron Valley, an Arab neighborhood of Silwan in East Jerusalem, and turn it into a park to be called the Garden of the King.[22]

A road crossing the very steep Wadi Naar (lower Kidron Valley) and connecting Arab towns has been substantially upgraded as part of the USAID effort to modernise the Arab infrastructure. An existing road has been widened and re-paved, and efforts were made to improve the route it takes.[2]