A lectionary (Latin: lectionarium) is a book or listing that contains a collection of scripture readings appointed for Christian or Judaic worship on a given day or occasion. There are sub-types such as a "gospel lectionary" or evangeliary, and an epistolary with the readings from the New Testament Epistles.

By the Medieval era the Jewish community had a standardized schedule of scripture readings from both the Torah and the prophets to be read in the synagogue. A sequential selection was read from the Torah, followed by the "haftarah" – a selection from the prophetic books or historical narratives (e.g. "Judges," "Kings," etc.) closely linked to the selection from the Torah. Jesus may have read a providentially "random" reading when he read from Isaiah 61:1–2, as recorded in Luke 4:16–21, when he inaugurated his public ministry.[citation needed] The early Christians adopted the Jewish custom of reading extracts from the Old Testament on the Sabbath. They soon added extracts from the writings of the Apostles and Evangelists.[1]

Both Hebrew and Christian lectionaries developed over the centuries. Typically, a lectionary will go through the scriptures in a logical pattern, and also include selections which were chosen by the religious community for their appropriateness to particular occasions. The one-year Jewish lectionary reads the entirety of the Torah within the space of a year and may have begun in the Babylonian Jewish community; the three-year Jewish lectionary seems to trace its origin to the Jewish community in and around the Holy Land.[2] The existence of both one-year and three-year cycles occurs in both Christianity and Judaism.

Within Christianity, the use of pre-assigned, scheduled readings from the scriptures can be traced back to the early church, and seems to have developed out of the practices of the second temple period. The earliest documentary record of a special book of readings is a reference by Gennadius of Massilia to a work produced at the request of Bishop Venerius of Marseilles, who died in 452, though there are 3rd-century references to liturgical readers as a special role in the clergy.[3] Not all of the Christian Church used the same lectionary, and throughout history, many varying lectionaries have been used in different parts of the Christian world. Until the Second Vatican Council, most Western Christians (Catholics, Old Catholics, Anglicans, Lutherans, and those Methodists who employed the lectionary of Wesley) used a lectionary that repeated on a one-year basis. This annual lectionary provided readings for Sundays and, in those Churches that celebrated the festivals of saints, feast-day readings. The Eastern Orthodox Church and many of the Oriental Churches continue to use an annual lectionary. Within Lutheranism there remains an active minority of pastors and congregations who use the old one-year lectionary, often referred to as the Historic Lectionary. The Reformed churches divided the Heidelberg Catechism into 52 weekly sections, and many churches preach or teach from a corresponding source scripture weekly.

Lectionaries from before the invention of the printing press contribute to understanding the textual history of the Bible. See also List of New Testament lectionaries.

Before the liturgical reforms of Vatican II, the Latin rite used a one-year lectionary consisting of a limited selection of sacred readings from the Scriptures. The reason to these limited selections is to maintain consistency, as is a true feature in the Roman Rite. There is one reading to be proclaimed before the Gospel, either taken from the Old Testament (referred to as Lesson) or from the letters of Saint Paul, Saint John, or Saint Peter (referred to as Epistle).

However, the Ambrosian Rite and the Mozarabic Rite has two Readings to be proclaimed, called Prophetia and Epistola. 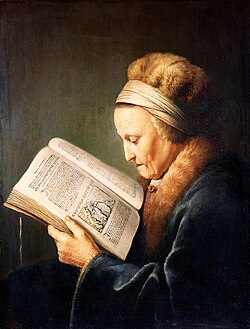 Portrait of Rembrandt's mother reading a lectionary, c. 1630 (Rijksmuseum, Amsterdam). The painting has more recently been attributed to Gerrit Dou.

After the Second Vatican Council of 1962–1965, the Holy See, even before producing an actual lectionary (in Latin), promulgated the Ordo Lectionum Missae (Order of the Readings for Mass), giving indications of the revised structure and the references to the passages chosen for inclusion in the new official lectionary of the Roman Rite of Mass. It introduced an arrangement by which the readings on Sundays and on some principal feasts recur in a three-year cycle, with four passages from Scripture (including one from the Psalms) being used in each celebration, while on weekdays only three passages (again including one from the Psalms) are used, with the first reading and the psalm recurring in a two-year cycle, while the Gospel reading recurs after a single year. This revised Mass Lectionary, covering much more of the Bible than the readings in the Tridentine Roman Missal, which recurred after a single year, has been translated into the many languages in which the Roman Rite Mass is now celebrated, incorporating existing or specially prepared translations of the Bible and with readings for national celebrations added either as an appendix or, in some cases, incorporated into the main part of the lectionary.

The Roman Catholic Mass Lectionary is the basis for many Protestant lectionaries, most notably the Revised Common Lectionary (RCL) and its derivatives, as organized by the Consultation on Common Texts (CCT) organization located in Nashville, Tennessee. Like the Mass lectionary, they generally organize the readings for worship services on Sundays in a three-year cycle, with four elements on each Sunday, and three elements during daily Mass:

The lectionaries (both Catholic and RCL versions) are organized into three-year cycles of readings. The years are designated A, B, or C. Each yearly cycle begins on the first Sunday of Advent (the Sunday between November 27 and December 3 inclusive). Year B follows year A, year C follows year B, then back again to A.

The Gospel of John is read throughout Easter, and is used for other liturgical seasons including Advent, Christmas, and Lent where appropriate.

The Roman Catholic lectionary includes a two-year cycle for the weekday mass readings (called Cycle I and Cycle II). Odd-numbered years are Cycle I; even-numbered ones are Cycle II. The weekday lectionary includes a reading from the Old Testament, Acts, Revelation, or the Epistles; a responsorial Psalm; and a reading from one of the Gospels. These readings are generally shorter than those appointed for use on Sundays. The pericopes for the first reading along with the psalms are arranged in a two-year cycle. The Gospels are arranged so that portions of all four are read every year. This weekday lectionary has also been adapted by some denominations with congregations that celebrate daily Eucharistic services. It has been published in the Episcopal Church's Lesser Feasts and Fasts and in the Anglican Church of Canada's Book of Alternative Services (among others).

This eucharistic lectionary should not be confused with the various Daily Office lectionaries in use in various denominations. The Consultation on Common Texts has produced a three-year Daily Lectionary which is thematically tied into the Revised Common Lectionary, but the RCL does not provide a daily Eucharistic lectionary as such. Various Anglican and Lutheran Churches have their own daily lectionaries. Many of the Anglican daily lectionaries are adapted from the one provided in the 1979 Book of Common Prayer.

In the Eastern Churches (Eastern Orthodox, Oriental Orthodox, Eastern Catholic, the Assyrian Church of the East, Ancient Church of the East, and those bodies not in communion with any of them but still practicing eastern liturgical customs) tend to retain the use of a one-year lectionary in their liturgy. Different churches follow different liturgical calendars (to an extent). Most Eastern lectionaries provide for an epistle and a Gospel to be read on each day. The oldest known complete Christian Lectionary is in the Caucasian Albanian language. 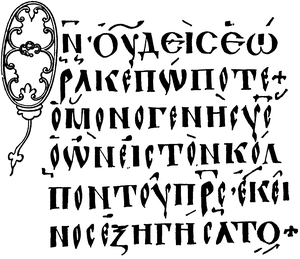 Those churches (Eastern Orthodox and Byzantine Catholic) which follow the Rite of Constantinople, provide an epistle and Gospel reading for most days of the year, to be read at the Divine Liturgy; however, during Great Lent there is no celebration of the liturgy on weekdays (Monday through Friday), so no epistle and Gospel are appointed for those days. As a historical note, the Greek lectionaries are a primary source for the Byzantine text-type used in the scholarly field of textual criticism.

The Gospel readings are found in what Orthodoxy usually calls a Gospel Book (Evangélion), although in strict English terms the Greek ones are in the form of an Evangeliary, and an Epistle Book (Apostól). There are differences in the precise arrangement of these books between the various national churches. In the Byzantine practice, the readings are in the form of pericopes (selections from scripture containing only the portion actually chanted during the service), and are arranged according to the order in which they occur in the church year, beginning with the Sunday of Pascha (Easter), and continuing throughout the entire year, concluding with Holy Week. Then follows a section of readings for the commemorations of saints and readings for special occasions (baptism, funeral, etc.). In the Slavic practice, the biblical books are reproduced in their entirety and arranged in the canonical order in which they appear in the Bible.

The annual cycle of the Gospels is composed of four series:

The Lukan Jump is related to the chronological proximity of the Elevation of the Cross to the Conception of the Forerunner (St. John the Baptist), celebrated on September 23. In late Antiquity, this feast marked the beginning of the ecclesiastical New Year. Thus, beginning the reading of the Lukan Gospel toward the middle of September can be understood. The reasoning is theological and is based on a vision of Salvation History: the Conception of the Forerunner constitutes the first step of the New Economy, as mentioned in the stikhera of the matins of this feast. The Evangelist Luke is the only one to mention this Conception (Luke 1:5–24).

Similarly to the Gospel Cycle, Epistle readings follow this plan although some exceptions vary:

Small portion of a Coptic lectionary

In the Jacobite Syriac Churches, the lectionary begins with the liturgical calendar year on Qudosh `Idto (the Sanctification of the Church), which falls on the eighth Sunday before Christmas. Both the Old and the New Testament books are read except the books of Revelation, Song of Solomon, and I and II Maccabees. Scripture readings are assigned for Sundays and feast days, for each day of Lent and Holy Week, for raising people to various offices of the Church, for the blessing of Holy Oil and various services such as baptisms and funerals.

Generally, three Old Testament lections, a selection from the prophets, and three readings from the New Testament are prescribed for each Sunday and Feast day. The New Testament readings include a reading from Acts, another from the Catholic Epistles or the Pauline Epistles, and a third reading from one of the Gospels. During Christmas and Easter a fourth lesson is added for the evening service. The readings reach a climax with the approach of the week of the Crucifixion. Through Lent lessons are recited twice a day except Saturdays. During the Passion Week readings are assigned for each of the major canonical hours.

If there is a weekday Liturgy celebrated on a non-feast day, the custom is to read the Pauline epistle only, followed by the Gospel.