Lot (/lɒt/; Hebrew: לוֹט‎ Lōṭ, lit. "veil" or "covering";[1] Greek: Λώτ Lṓt; Arabic: لُوط‎ Lūṭ) is a character in the biblical Book of Genesis, chapters 11–14 and 19. Notable events in his life include his journey with his uncle Abram (Abraham); his flight from the destruction of Sodom and Gomorrah, during which Lot's wife became a pillar of salt; and his being intoxicated by his daughters so that they could have sexual intercourse with him.[2]

Albrecht Dürer, Lot and His Daughters, c. 1499 (National Gallery of Art, Washington D.C.). His wife is left as a pillar of salt on the road behind.

Lot and his father Haran were born and raised in Ur of the Chaldees,[11:28, 31] in the region of Sumeria on the River Euphrates of lower Mesopotamia.[3] Haran died in that land before his father Terah.[11:28]

Terah, Lot's grandfather, arranged for their large family to set a course for Canaan where they could reestablish a new home. Among the family members that Lot travelled with was his uncle Abram (later called Abraham), one of the three patriarchs of Israel.[11:31]

En route to Canaan, the family stopped in the Paddan Aram region, about halfway along the Fertile Crescent between Mesopotamia and the Mediterranean.[3] They settled at the site called Haran where Terah lived the rest of his days. He was 205 years old when he died.[11:32]

Genesis 12 reveals Abram's obedience to the Lord at the age of 75, in continuing his journey to the land of promise. After his grandfather Terah died in Haran, Lot joined Abram on his journey to Canaan. There is no mention of Lot having a wife yet. They went southwestward[4] into the land of Canaan, to the place of Sichem,[12:5–6] the present day West Bank of Nablus.[4] Later they travelled south to the hills between Bethel and Hai,[12:8] before journeying further toward the south of Canaan.[12:9]

After they dwelt in the land of Canaan for a little while, a famine overtook the countryside, and they journeyed many miles farther south into Egypt.[12:10–20] After having dwelt in Egypt for some time, they acquired vast amounts of wealth and numbers of livestock and returned to the Bethel area.[13:1–5]

Lot in the plain of Jordan

Genesis 13 discusses Abram and Lot's return to Canaan after the famine had passed and the lands became fertile again. They traveled back through the Negev to the hills of Bethel.[13:1, 3] With their constant movement and the sizeable numbers of livestock each family owned requiring pasture, the herdsmen of the two groups began to bicker.[13:6–7] These arguments became so troublesome that Abram suggested to Lot that they part ways, lest conflict continue among the "brethren".[13:8–9]

Abram gave Lot the choice of which direction to take. Lot looked beyond Jordan toward a well-irrigated plain and chose that land, for it seemed "like the garden of the LORD".[13:9-11] Abram then went to dwell in Hebron, staying within the land of Canaan, while Lot camped among the cities of the Jordan plain and pitched his tent facing Sodom.[13:12, 18]

Some time before this, the five kingdoms of the plain had become vassal states of an alliance of four eastern kingdoms under the leadership of Chedorlaomer, king of Elam. They served this king for twelve years, but "in the thirteenth year they rebelled."[14:1–4] The following year Chedorlaomer's four armies returned and at the Battle of the Vale of Siddim, the kings of Sodom and Gomorrah fell in defeat.[14:5–10] Chedorlaomer despoiled the cities and took captives as he departed, including Lot, who by then "dwelt" in Sodom.[14:11–12]

When Abram heard what had happened to his "brother" Lot, he armed a rescue force of three hundred and eighteen of his trained servants and caught up to the armies of the four kings in the territory of the Tribe of Dan.[14:13–14] Abram divided his forces, which attacked at night from multiple directions, and the four kings fled northeast. Abram's pursuit continued and the "slaughter of Chedorlaomer" and the other kings was completed at Hobah, north of Damascus. Abram brought back "his brother Lot" and all the people and their belongings.[14:15–24]

Lot prevents the Sodomites from raping the Angels, print by Heinrich Aldegrever, 1555

Twenty four years after Abram and Lot began their sojourning, God changed Abram's name to Abraham, and gave him the covenant of circumcision.[17:1-14] Not long afterward, "the LORD appeared" to Abraham in the form of "three men" come to visit and have a meal with him, and after two left to go to Sodom, "Abraham stood yet before the LORD."[18:1–22] Abraham boldly pleaded on behalf of the people of Sodom, where Lot dwelt, and obtained assurance the city would not be destroyed if fifty righteous people were found there. He continued inquiring, reducing the minimum number for sparing the city to forty five, forty, thirty, twenty, and finally, ten.[18:23–33]

<poem style="display:table;"> Genesis 19:1 And there came two angels to Sodom at even; and Lot sat in the gate of Sodom: and Lot seeing them rose up to meet them; and he bowed himself with his face toward the ground; 2 And he said, Behold now, my lords, turn in, I pray you, into your servant's house, and tarry all night, and wash your feet, and ye shall rise up early, and go on your ways. And they said, Nay; but we will abide in the street all night. 3 And he pressed upon them greatly; and they turned in unto him, and entered into his house; and he made them a feast, and did bake unleavened bread, and they did eat.</poem>

After supper that night before bedtime, the men of the city, young and old, gathered around Lot's house demanding he bring his two guests out that they might "know" them. Lot went out and closed the door behind him and prayed that they not do such wicked things, and offered them his virgin daughters, that had not "known" man, that they might know them instead, and do with as they pleased. His response infuriated the men of Sodom who accused him of being judgmental and they threatened to do worse to him than they would have done to the men.[19:4–9]

Before they could harm Lot and break into the house, the men pulled Lot back in and struck the intruders with blindness, and revealed to Lot that they were angels sent to destroy the place. This allowed a window of opportunity for Lot to make preparations for him and his family to leave. When he went out to the men that were engaged to marry his daughters, warning them to flee, they assumed he was joking.[19:10–14]

As the day began to dawn, the angels urged him to hurry up and leave; when he lingered, the angels took hold of Lot, his wife and two daughters, and transported them beyond the city and set them down. The angel told Lot, "Escape for thy life; look not behind thee, neither stay thou in all the plain; escape to the mountain, lest thou be consumed."[19:15–17] Lot argued that if he went to the mountain some evil would cause his death, and he requested to be allowed to flee instead to the "little" city which was closer. (This city of Bela was later called Zoar because it was little.) His request was accepted, and they headed for Zoar instead.[19:18–22]

Mount Sodom, Israel, showing the so-called "Lot's Wife" pillar composed, like the rest of the mountain, of halite.

<poem style="display:table;"> Genesis 19:23 The sun was risen upon the earth when Lot entered into Zoar. 24 Then the LORD rained upon Sodom and upon Gomorrah brimstone and fire from the LORD out of heaven; 25 And he overthrew those cities, and all the plain, and all the inhabitants of the cities, and that which grew upon the ground.

26 But his wife looked back from behind him, and she became a pillar of salt.</poem>

Abraham could see the smoke billowing upward from the countryside.[19:27–28]

Instead of both fire and brimstone, Josephus has only lightning as the cause of the fire that destroyed Sodom: "God then cast a thunderbolt upon the city, and set it on fire, with its inhabitants; and laid waste the country with the like burning."[5] In The Jewish War, he likewise says that the city was "burnt by lightning".[6]

Lot and his daughters

Lot and His Daughters, by Joachim Wtewael, 1630 (Gemäldegalerie, Berlin) 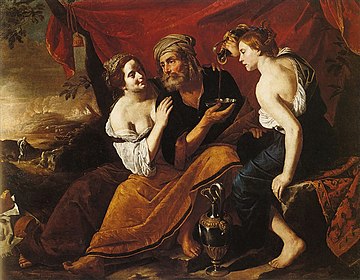 The account of Lot and his daughters is in Genesis 19:30–38. Template:Quotation 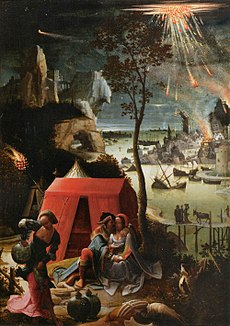 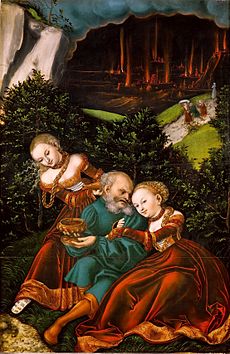 Lot and His Daughters, by Lucas Cranach the Elder, 1528 (Kunsthistorisches Museum, Vienna) 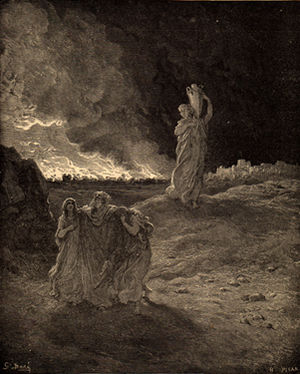 The Flight of Lot from Sodom, etching by Gustave Doré, 1866

In the Christian New Testament, Lot is considered sympathetically, as a man who regretted his choice to live in Sodom, where he "vexed his righteous soul from day to day".[2Pet 2:6-9] Jesus spoke of future judgment coming suddenly as in the days of Lot, and warned solemnly, "Remember Lot's wife".[Luke 17:28-33]

In Islamic tradition, Lut lived in Ur and was a nephew of Ibrahim (Abraham). He migrated with Ibrahim to Canaan and was commissioned as a prophet to the cities of Sodom and Gomorrah.[14] His story is used as a reference by Muslims to demonstrate God's disapproval of homosexuality. He was commanded by Allah to go to the land of Sodom and Gomorrah to preach monotheism and to stop them from their lustful and violent acts. Lut's messages were ignored by the inhabitants, prompting Sodom and Gomorrah's destruction. Though Lut left the city, his wife was asked to be left behind by angels hence died during the destruction.[14] The Quran defines Lot as a prophet, and holds that all prophets were examples of moral and spiritual rectitude. The Quran does not include stories of Lot's drunkenness and/or incest. All Muslims reject the story of Prophet Lot having sex with his daughters.

The presumptive incest between Lot and his daughters has raised many questions, debates, and theories as to what the real motives were, who really was at fault, and the level of bias the author of Genesis Chapter 19 had. However, such biblical scholars as Jacob Milgrom,[16] Victor P. Hamilton,[17] and Calum Carmichael[18] postulate that the Levitical laws could not have been developed the way they were, without controversial issues surrounding the patriarchs of Israel, especially regarding incest. Carmichael even attributes the entire formulation of the Levitical laws to the lives of the founding fathers of the nation, including the righteous Lot (together with Abraham, Jacob, Judah, Moses, and David), who were outstanding figures in Israelite tradition.

According to the scholars mentioned above, the patriarchs of Israel are the key to understanding how the priestly laws concerning incest developed. Kinship marriages amongst the patriarchs include Abraham's marriage to his half-sister Sarai;[Gen 20:11–12] the marriage of Abraham's brother, Nahor, to their niece Milcah;[Gen 11:27–29] Isaac's marriage to Rebekah, his first cousin once removed;[Gen 27:42–43; 29:10] Jacob's marriages with two sisters who are his first cousins;[Gen 29:10] and, in the instance of Moses's parents, a marriage between nephew and aunt (father's sister).[Exod 6:20] Therefore, the patriarchal marriages surely mattered to lawgivers and they suggest a narrative basis for the laws of Leviticus, chapters 18 and 20.[19]