A full Moon sets behind San Gorgonio Mountain in California on a midsummer's morning.

The lunar phase or Moon phase is the shape of the Moon's directly sunlit portion as viewed from Earth. The lunar phases gradually change over a synodic month (about 29.53 days) as the Moon's orbital positions around Earth and Earth around the Sun shift. The visible side of the moon is variously sunlit, depending on the position of the Moon in its orbit. Thus, this face's sunlit portion can vary from 0% (at new moon) to 100% (at full moon). Each of the four "intermediate" lunar phases (see below) is approximately 7.4 days, with slight variation due to the Moon's orbit's elliptical shape.

Phases of the Moon

Non-Western cultures may use a different number of lunar phases; for example, traditional Hawaiian culture has a total of 30 phases (one per day).[2]

Diagram of the Moon's phases: The Earth is at the center of the diagram and the Moon is shown orbiting.

When the Sun and Moon are aligned on the same side of the Earth, the Moon is "new", and the side of the Moon facing Earth is not illuminated by the Sun. As the Moon waxes (the amount of illuminated surface as seen from Earth is increasing), the lunar phases progress through new moon, crescent moon, first-quarter moon, gibbous moon, and full moon. The Moon is then said to wane as it passes through the gibbous moon, third-quarter moon, crescent moon, and back to new moon. The terms old moon and new moon are not interchangeable. The "old moon" is a waning sliver (which eventually becomes undetectable to the naked eye) until the moment it aligns with the Sun and begins to wax, at which point it becomes new again.[3] Half moon is often used to mean the first- and third-quarter moons, while the term quarter refers to the extent of the Moon's cycle around the Earth, not its shape.

In the Southern Hemisphere, the Moon is observed from a perspective inverted, or rotated 180°, to that of the Northern and to all of the images in this article, so that the opposite sides appear to wax or wane.

Closer to the Equator, the lunar terminator will appear horizontal during the morning and evening. Since the above descriptions of the lunar phases only apply at middle or high latitudes, observers moving towards the tropics from northern or southern latitudes will see the Moon rotated anti-clockwise or clockwise with respect to the images in this article. 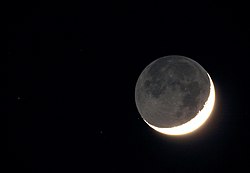 When the Moon as seen from Earth is a thin crescent, Earth as viewed from the Moon is almost fully lit by the Sun. Often, the dark side of the Moon is dimly illuminated by indirect sunlight reflected from Earth, but is bright enough to be easily visible from Earth. This phenomenon is called earthshine and sometimes picturesquely described as "the old moon in the new moon's arms" or "the new moon in the old moon's arms".

The Gregorian calendar month, which is 1⁄12 of a tropical year, is about 30.44 days, while the cycle of lunar phases (the Moon's synodic period) repeats every 29.53 days on average. Therefore, the timing of the lunar phases shifts by an average of almost one day for each successive month. (A lunar year lasts about 354 or 355 days.)

Photographing the Moon's phase every day for a month (starting in the evening after sunset, and repeating roughly 24 hours and 50 minutes later, and ending in the morning before sunrise) and arranging the series of photos on a calendar would create a composite image like the example calendar (May 8 – June 6, 2005) shown on the left. May 20 is blank because a picture would be taken before midnight on May 19 and the next after midnight on May 21.

Similarly, on a calendar listing moonrise or moonset times, some days will appear to be skipped. When moonrise precedes midnight one night, the next moonrise will follow midnight on the next night (so too with moonset). The "skipped day" is just a feature of the Moon's eastward movement in relation to the Sun, which at most latitudes, causes the Moon to rise later each day. The Moon follows a predictable orbit every month. 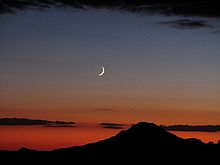 A crescent Moon over Kingman, Arizona

Each of the four intermediate phases lasts approximately seven days (7.38 days on average), but varies slightly due to lunar apogee and perigee.

The number of days counted from the time of the new moon is the Moon's "age". Each complete cycle of phases is called a "lunation".[6]

The approximate age of the Moon, and hence the approximate phase, can be calculated for any date by calculating the number of days since a known new moon (such as January 1, 1900 or August 11, 1999) and reducing this modulo 29.53059 days (the mean length of a synodic month).[7][lower-alpha 4] The difference between two dates can be calculated by subtracting the Julian day number of one from that of the other, or there are simpler formulae giving (for instance) the number of days since December 31, 1899. However, this calculation assumes a perfectly circular orbit and makes no allowance for the time of day at which the new moon occurred and therefore may be incorrect by several hours. (It also becomes less accurate the larger the difference between the required date and the reference date). It is accurate enough to use in a novelty clock application showing lunar phase, but specialist usage taking account of lunar apogee and perigee requires a more elaborate calculation.

The Earth subtends an angle of about two degrees when seen from the Moon. This means that an observer on Earth who sees the Moon when it is close to the eastern horizon sees it from an angle that is about 2 degrees different from the line of sight of an observer who sees the Moon on the western horizon. The Moon moves about 12 degrees around its orbit per day, so, if these observers were stationary, they would see the phases of the Moon at times that differ by about one-sixth of a day, or 4 hours. But in reality, the observers are on the surface of the rotating Earth, so someone who sees the Moon on the eastern horizon at one moment sees it on the western horizon about 12 hours later. This adds an oscillation to the apparent progression of the lunar phases. They appear to occur more slowly when the Moon is high in the sky than when it is below the horizon. The Moon appears to move jerkily, and the phases do the same. The amplitude of this oscillation is never more than about four hours, which is a small fraction of a month. It does not have any obvious effect on the appearance of the Moon. It does however affect accurate calculations of the times of lunar phases.

It can be confusing that the moon’s orbital period is 27.3 days while the phases complete a cycle once every 29.5 days. This is due to the earth’s rotation around the sun. The moon orbits the earth 13.4 times a year, but only passes between the earth and sun 12.4 times.

It might be expected that once every month, when the Moon passes between Earth and the Sun during a new moon, its shadow would fall on Earth causing a solar eclipse, but this does not happen every month. Nor is it true that during every full moon, the Earth's shadow falls on the Moon, causing a lunar eclipse. Solar and lunar eclipses are not observed every month because the plane of the Moon's orbit around the Earth is tilted by about 5° with respect to the plane of Earth's orbit around the Sun (the plane of the ecliptic). Thus, when new and full moons occur, the Moon usually lies to the north or south of a direct line through the Earth and Sun. Although an eclipse can only occur when the Moon is either new (solar) or full (lunar), it must also be positioned very near the intersection of Earth's orbital plane about the Sun and the Moon's orbital plane about the Earth (that is, at one of its nodes). This happens about twice per year, and so there are between four and seven eclipses in a calendar year. Most of these eclipses are partial; total eclipses of the Moon or Sun are less frequent.