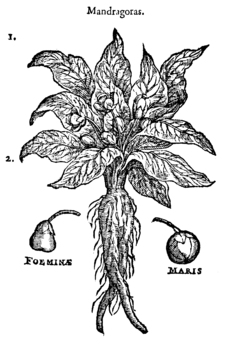 The so-called "female" and "male" mandrakes, from a 1583 illustration 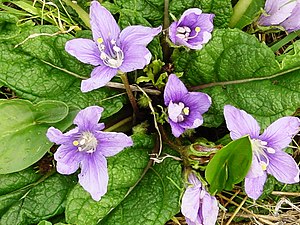 The flowers of a mandrake plant

A mandrake is the root of a plant, historically derived either from plants of the genus Mandragora found in the Mediterranean region, or from other species, such as Bryonia alba, the English mandrake, which have similar properties. The plants from which the root is obtained are also called "mandrakes". Mediterranean mandrakes are perennial herbaceous plants with ovate leaves arranged in a rosette, a thick upright root, often branched, and bell-shaped flowers followed by yellow or orange berries. They have been placed in different species by different authors. They are highly variable perennial herbaceous plants with long thick roots (often branched) and almost no stem. The leaves are borne in a basal rosette, and are variable in size and shape, with a maximum length of 45 cm (18 in). They are usually either elliptical in shape or wider towards the end (obovate), with varying degrees of hairiness.[1]

Because mandrakes contain deliriant hallucinogenic tropane alkaloids and the shape of their roots often resembles human figures, they have been associated with a variety of superstitious practices throughout history.[2]

The English name of the plant derives from Latin mandragora through French main-de-gloire.[3]

All species of Mandragora contain highly biologically active alkaloids, tropane alkaloids in particular. The alkaloids make the plant, in particular the root and leaves, poisonous, via anticholinergic, hallucinogenic, and hypnotic effects. Anticholinergic properties can lead to asphyxiation. Accidental poisoning is not uncommon. Ingesting mandrake root is likely to have other adverse effects such as vomiting and diarrhea. The alkaloid concentration varies between plant samples. Clinical reports of the effects of consumption of Mediterranean mandrake include severe symptoms similar to those of atropine poisoning, including blurred vision, dilation of the pupils (mydriasis), dryness of the mouth, difficulty in urinating, dizziness, headache, vomiting, blushing and a rapid heart rate (tachycardia). Hyperactivity and hallucinations also occurred in the majority of patients.[4][5]

The root is hallucinogenic and narcotic. In sufficient quantities, it induces a state of unconsciousness and was used as an anaesthetic for surgery in ancient times.[6] In the past, juice from the finely grated root was applied externally to relieve rheumatic pains.[6] It was also used internally to treat melancholy, convulsions, and mania.[6] When taken internally in large doses, however, it is said to excite delirium and madness.[6]

In the past, mandrake was often made into amulets which were believed to bring good fortune, cure sterility, etc. In one superstition, people who pull up this root will be condemned to hell, and the mandrake root would scream and cry as it was pulled from the ground, killing anyone who heard it.[2] Therefore, in the past, people have tied the roots to the bodies of animals and then used these animals to pull the roots from the soil.[2]

Two references to דודאים (duda'im, plural; singular דודא duda)—literally meaning "love plants"—occur in the Jewish scriptures. The Septuagint translates דודאים as μανδραγόρας (mandragóras), and the Vulgate follows the Septuagint. A number of later translations into different languages follow Septuagint (and Vulgate) and use mandrake as the plant as the proper meaning in both the Book of Genesis 30:14–16 and Song of Songs 7:12-13. Others follow the example of the Luther Bible and provide a more literal translation.

In Genesis 30:14, Reuben, the eldest son of Jacob and Leah, finds mandrakes in a field. Rachel, Jacob's infertile second wife and Leah's sister, is desirous of the דודאים and barters with Leah for them. The trade offered by Rachel is for Leah to spend that night in Jacob's bed in exchange for Leah's דודאים. Leah gives away the plants to her barren sister, but soon after this (Genesis 30:14–22), Leah, who had previously had four sons but had been infertile for a long while, became pregnant once more and in time gave birth to two more sons, Issachar and Zebulun, and a daughter, Dinah. Only years after this episode of her asking for the mandrakes did Rachel manage to become pregnant.

14 And Reuben went in the days of wheat harvest, and found mandrakes in the field, and brought them unto his mother Leah. Then Rachel said to Leah, Give me, I pray thee, of thy son's mandrakes.

15 And she said unto her, Is it a small matter that thou hast taken my husband? and wouldest thou take away my son's mandrakes also? And Rachel said, Therefore he shall lie with thee to night for thy son's mandrakes.

16 And Jacob came out of the field in the evening, and Leah went out to meet him, and said, Thou must come in unto me; for surely I have hired thee with my son's mandrakes. And he lay with her that night.

Sir Thomas Browne, in Pseudodoxia Epidemica, ch. VII, suggested the duda'im of Genesis 30:14 is the opium poppy, because the word duda'im may be a reference to a woman's breasts.

12 Let us get up early to the vineyards; let us see if the vine flourish, whether the tender grape appear, and the pomegranates bud forth: there will I give thee my loves.

13 The mandrakes give a smell, and at our gates are all manner of pleasant fruits, new and old, which I have laid up for thee, O my beloved.