Matthew the Apostle,[lower-alpha 1] also known as Saint Matthew and as Levi, was, according to the New Testament, one of the twelve apostles of Jesus. According to Christian traditions, he was also one of the four Evangelists and thus is also known as Matthew the Evangelist, a claim rejected by the majority of modern biblical scholars, though the "traditional authorship still has its defenders."[3]

The New Testament records that as a disciple, he followed Jesus, and was one of the witnesses of the Ascension of Jesus. Later Church fathers such as Irenaeus and Clement of Alexandria claim that Matthew preached the Gospel to the Jewish community in Judea, before going to other countries.

Matthew in a painted miniature from a volume of Armenian Gospels dated 1609, held by the Bodleian Library

Among the early followers and apostles of Jesus, Matthew is mentioned in Matthew 9:9 and Matthew 10:3 as a publican (KJV) or tax collector (NIV) who, while sitting at the "receipt of custom" in Capernaum, was called to follow Jesus.[Matthew 9:9][Mark 2:15–17][Luke 5:29] He is also listed among the twelve, but without identification of his background, in Mark 3:18, Luke 6:15 and Acts 1:13. In passages parallel to Matthew 9:9, both Mark 2:14 and Luke 5:27 describe Jesus' calling of the tax collector Levi, the son of Alphaeus, but Mark and Luke never explicitly equate this Levi with the Matthew named as one of the twelve.

According to the Gospels, Matthew was a 1st-century Galilean (presumably born in Galilee, which was not part of Judea or the Roman Judaea province), the son of Alphaeus.[4] As a tax collector, he would probably not have been literate, and certainly could not write highly educated Greek.[5][6] His fellow Jews would have despised him for what was seen as collaborating with the Roman occupation force.[7]

After his call, Matthew invited Jesus home for a feast. On seeing this, the Scribes and the Pharisees criticized Jesus for eating with tax collectors and sinners. This prompted Jesus to answer, "I came not to call the righteous, but sinners to repentance."[Mark 2:17][Luke 5:32]

The New Testament records that as a disciple, he followed Jesus, and was one of the witnesses of the Ascension of Jesus. Afterwards, the disciples withdrew to an upper room (Acts 1:10–14)[8](traditionally the Cenacle) in Jerusalem.[4] The disciples remained in and about Jerusalem and proclaimed that Jesus was the promised Messiah.

In the Babylonian Talmud (Sanhedrin 43a), "Mattai" is one of five disciples of "Jeshu".[9]

Later Church fathers such as Irenaeus (Against Heresies 3.1.1) and Clement of Alexandria claim that Matthew preached the Gospel to the Jewish community in Judea, before going to other countries. Ancient writers are not in agreement as to which these other countries are.[4] The Catholic Church and the Orthodox Church each hold the tradition that Matthew died as a martyr,[10][11] although this was rejected by Heracleon, a Gnostic Christian viewed as a heretic, as early as the second century.[12]

Saint Matthew and the Angel (1661) by Rembrandt

The Gospel of Matthew is anonymous: the author is not named within the text, and the superscription "according to Matthew" was added some time in the second century.[13][14] The tradition that the author was the disciple Matthew begins with the early Christian bishop Papias of Hierapolis (c. AD 60–163),[15] who is cited by the Church historian Eusebius (AD 260–340), as follows: "Matthew collected the oracles (logia: sayings of or about Jesus) in the Hebrew language (Hebraïdi dialektōi), and each one interpreted (hērmēneusen – perhaps "translated") them as best he could."[16][lower-alpha 2][17]

On the surface, this has been taken to imply that Matthew's Gospel itself was written in Hebrew or Aramaic by the apostle Matthew and later translated into Greek, but nowhere does the author claim to have been an eyewitness to events, and Matthew's Greek "reveals none of the telltale marks of a translation".[18][13] Scholars have put forward several theories to explain Papias: perhaps Matthew wrote two gospels, one, now lost, in Hebrew, the other our Greek version; or perhaps the logia was a collection of sayings rather than the gospel; or by dialektōi Papias may have meant that Matthew wrote in the Jewish style rather than in the Hebrew language.[16] The consensus is that Papias does not describe the Gospel of Matthew as we know it, and it is generally accepted that Matthew was written in Greek, not in Aramaic or Hebrew.[19] Therefore, while the traditional authorship still has defenders, the majority of mainstream Bible scholars rejects the Matthean authorship of the gospel. [20][3] 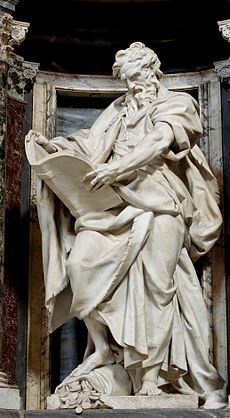 In the 3rd-century Jewish–Christian gospels attributed to Matthew were used by Jewish–Christian groups such as the Nazarenes and Ebionites. Fragments of these gospels survive in quotations by Jerome, Epiphanius and others. Most academic study follows the distinction of Gospel of the Nazarenes (36 fragments), Gospel of the Ebionites (7 fragments), and Gospel of the Hebrews (7 fragments) found in Schneemelcher's New Testament Apocrypha. Critical commentators generally regard these texts as having been composed in Greek and related to Greek Matthew.[21] minority of commentators consider them to be fragments of a lost Aramaic- or Hebrew-language original.

The Gospel of Pseudo-Matthew is a 7th-century compilation of three other texts: the Gospel of James, the Flight into Egypt, and the Infancy Gospel of Thomas.

Origen said the first Gospel was written by Matthew.[22][23] This Gospel was composed in Hebrew near Jerusalem for Hebrew Christians and translated into Greek, but the Greek copy was lost. The Hebrew original was kept at the Library of Caesarea. The Nazarene Community transcribed a copy for Jerome[24] which he used in his work.[25] Matthew's Gospel was called the Gospel according to the Hebrews[26] or sometimes the Gospel of the Apostles[27][28] and it was once believed that it was the original to the Greek Matthew found in the Bible.[29] However, this has been challenged by modern biblical scholars such as Bart D. Ehrman and James R. Edwards.[30][19] See also the two-source hypothesis[31][32]

Jerome relates that Matthew was supposed by the Nazarenes to have composed their Gospel of the Hebrews[25] though Irenaeus and Epiphanius of Salamis consider this simply a revised version of the canonical Gospel. This Gospel has been partially preserved in the writings of the Church Fathers, said to have been written by Matthew.[31] Epiphanius does not make his own the claim about a Gospel of the Hebrews written by Matthew, a claim that he merely attributes to the heretical Ebionites.[32]

Matthew is recognized as a saint in the Roman Catholic, Eastern Orthodox, Lutheran[33] and Anglican churches (see St. Matthew's Church). His feast day is celebrated on 21 September in the West and 16 November in the East. (Those churches which follow the traditional Julian Calendar would keep the day on 29 November of the modern Gregorian Calendar, being 16 November in the Julian Calendar). He is also commemorated by the Orthodox, together with the other Apostles, on 30 June (13 July), the Synaxis of the Holy Apostles. His tomb is located in the crypt of Salerno Cathedral in southern Italy. Matthew is remembered in the Church of England with a Festival on 21 September.[34]

Like the other evangelists, Matthew is often depicted in Christian art with one of the four living creatures of Revelation 4:7. The one that accompanies him is in the form of a winged man. The three paintings of Matthew by Caravaggio in the church of San Luigi dei Francesi in Rome, where he is depicted as called by Christ from his profession as tax gatherer, are among the landmarks of Western art.

The Quran speaks of Jesus' disciples but does not mention their names, instead referring to them as "helpers to the work of Allah".[35] Muslim exegesis and Qur'an commentary, however, name them and include Matthew amongst the disciples.[36] Muslim exegesis preserves the tradition that Matthew and Andrew were the two disciples who went to Ethiopia to preach the message of God.