Codex Basilensis A. N. IV. 2, Minuscule 1 (on the list of Gregory-Aland), δ 254 (in von Soden's numbering)[1] and formerly designated by 1eap to distinguish it from minuscule 1rK (which previously used number 1) is a Greek minuscule manuscript of the New Testament, usually dated palaeographically to the 12th century AD. It is written on 297 parchment leaves and contains the entire New Testament except the Book of Revelation.

The codex was prepared for liturgical use with marginalia (text's division), and has almost completely survived; Erasmus used it for his Novum Instrumentum omne. The text of the manuscript has been cited in all critical editions of the Greek New Testament; in this codex, the text of the Gospels is more highly esteemed by scholars than that of the remaining New Testament books. The codex is housed at the Basel University Library, with shelf number A. N. IV, 2 (earlier B. VI. 27).[2]

The codex contains the entire New Testament (except of Book of Revelation) in the following order: the Gospels, the Acts of the Apostles and the General and Pauline epistles (Hebrews is the last book in Paul). The text is written in one column per page, 38 lines per page, on 297 parchment leaves (Template:×).[3] It was originally accompanied by miniatures, which were stolen before 1860–1862 (except one before the Gospel of John, which remains).[4]

The dimensions of the text are Template:×.[2] It was written on parchment continuously and without separation in elegant minuscule, furnished with breathings (spiritus asper and spiritus lenis) and accents, in Iota adscript. The initial letters are gilt, and on the first page of each Gospel the full stop is a large gilt ball.[4]

The text is divided according to chapters (κεφαλαια) whose numbers are given at the margin, with their titles (τιτλοι) at the top of the page. The text of the Gospels is divided according to the smaller Ammonian Sections (in Matthew 352, in Mark 236 with last numbered section in 16:12, in Luke 340, in John 227), but references to the Eusebian Canons are absent.[5] The Book of Acts and the epistles have the Euthalian Apparatus.[5]

It contains prolegomena, synaxaria (a list of saints), two types of lectionary markings at the margin (for liturgical reading) and pictures (e.g. a portrait of John the Evangelist and Prochorus). The later type of liturgical notes, so called αναγνωσεις (only for Gospels) were added by a later hand (in red). The Gospel of Matthew has 116 αναγνωσεις, the Gospel of Mark – 70, the Gospel of Luke – 114, and the Gospel of John – 67 αναγνωσεις.[5] In the 15th century, the later hand added Prolegomena.[6] 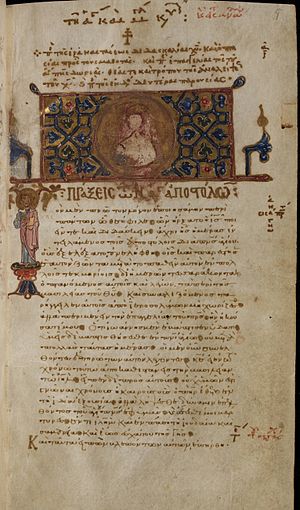 The beginning of the Book of Acts

In Aland's Profile, Kurt and Barbara Aland placed the codex's Gospels in Category III, meaning it has historical importance, with the profile of 1191, 802, 601/2, 69s.[8] This means the text of the codex agrees with the Byzantine standard text 119 times, with the original text against the Byzantine 80 times, and with both the Byzantine and original text 60 times. There are 69 independent or distinctive readings in the Gospels.[9] While the Gospels are a representative of the Caesarean text-type,[10] the remainder of the books of the New Testament in this codex is a representative of the Byzantine text-type and falls into Category V, the lowest and least important in Aland's Profile.[8]

It belongs to the textual Family 1 with manuscripts 118, 131 and 209.[11] Classification in this textual family was supported by the Claremont Profile Method, but it examined with this method only in Luke 1, Luke 10 and Luke 20.[12]

Johann Jakob Griesbach was the first who noted its similarities to the text of Origen's commentary to the Gospel of Matthew.[13] According to Hort, its text preceded the byzantine text-type.

Kirsopp Lake compared the text of the codex with the text of Stephanus and showed that in the sections comprising Matthew 1-10; Matthew 22–Mark 14; Luke 4-23; John 1-13 and 18, in this codex there are 2243 variants from the Textus Receptus.[14]

In Matthew 27:16, it has the well-known textual variant "Ιησουν τον Βαραββαν" (Jesus Barabbas). This variant also appears in the Codex Koridethi, Minuscule 700 and other members of the group f1.[15] 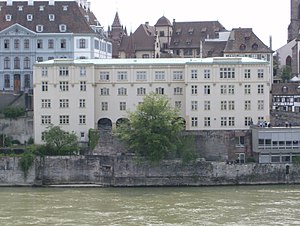 Textual critics and palaeographers like Johann Jakob Wettstein, Constantin von Tischendorf, Frederick Henry Ambrose Scrivener and Caspar René Gregory dated the manuscript to the 10th century.[16] Henri Omont and Kirsopp Lake dated it to the 12th century, and Dean Burgon to the 12th or 13th century. It is dated by the Institute for New Testament Textual Research to the 12th century[3][17] because the frequent occurrence of enlarged letters, rounded breathing marks, flourishes and ligatures seem to eliminate earlier dates.[2]

The manuscript was presented to the monastery of the Preaching Friars by Cardinal Ragusio (1380–1443), general of the Dominicans.[5] It was used by Desiderius Erasmus in the first edition of his Novum Testamentum (1516); as a result, some of its readings are found in the Textus Receptus. Erasmus used this codex very little, because its text was different from other manuscripts with which he was acquainted. Oecolampadius and Gerbelius (Erasmus's sub-editors) insisted that he use more readings from this codex in his third edition; however, according to Erasmus the text of this codex was altered from the Latin manuscripts and had secondary value.[18] Since 1559, it has been kept at the University of Basel,[5] along with Codex Basilensis and minuscule 2 (GA).

Johann Albrecht Bengel used several extracts from the codex, and Wettstein was the first who thoroughly examined it. According to him, in the Gospels its text agrees with the most ancient codices and patristic quotations; therefore, he called it number one.[19] In 1751 he changed his high opinion (Novum Testamentum Græcum),[20] dating the codex to the 10th century. Wettstein collated this manuscript twice, with many errors; according to Samuel Prideaux Tregelles, his collation was incorrect in more than 1,200 readings. Leonard Hug supported Wettstein's last opinion that the codex was Latinisated.[21] Tregelles and Roth again collated the text of this codex, and Tregelles noticed that this codex is textually close to minuscule 118. Dean Burgon noticed that codices 131 and 209 are also textually similar. This entire group was examined by Kirsopp Lake in 1902, and it was called "the Lake Group" (or Family 1). The text of the family was established on the basis of minuscule 1 (collates codex 1 with Minuscules 118, 131, and 209).[22]

The manuscript has been cited in all critical editions of the Greek New Testament and systematically cited in the third and fourth editions edited by United Bible Societies (UBS3[24] and UBS4[25]) and Nestle-Aland's 26th and 27th editions (NA26[26] and NA27). In NA27, the codex is cited as a witness of the first order.[27]