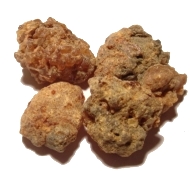 Myrrh (/mɜːr/; from Semitic, but see § Etymology) is a gum-resin extracted from a number of small, thorny tree species of the genus Commiphora.[1] Myrrh resin has been used throughout history as a perfume, incense and medicine. Myrrh mixed with posca or wine was common across ancient cultures, for general pleasure, and as an analgesic.[2][citation needed]

Commiphora myrrha tree, one of the primary trees from which myrrh is harvested

When a wound on a tree penetrates through the bark and into the sapwood, the tree secretes a resin. Myrrh gum, like frankincense, is such a resin. Myrrh is harvested by repeatedly wounding the trees to bleed the gum, which is waxy and coagulates quickly. After the harvest, the gum becomes hard and glossy. The gum is yellowish and may be either clear or opaque. It darkens deeply as it ages, and white streaks emerge.[3]

Commiphora myrrha is native to Somalia, Oman, Yemen, Eritrea, (Somali Region of) Ethiopia and parts of Saudi Arabia. Meetiga, the trade-name of Arabian Myrrh, is more brittle and gummy than the Somali variety and does not have the latter's white markings.

The oleo gum resins of a number of other Commiphora species are also used as perfumes, medicines (such as aromatic wound dressings), and incense ingredients. These myrrh-like resins are known as bdellium (including guggul and African bdellium), balsam (balm of Gilead or Mecca balsam) and opopanax (bisabol).

Fragrant "myrrh beads" are made from the crushed seeds of Detarium microcarpum, an unrelated West African tree. These beads are traditionally worn by married women in Mali as multiple strands around the hips.

The name "myrrh" is also applied to the potherb Myrrhis odorata, otherwise known as "cicely" or "sweet cicely".

Liquid myrrh, or stacte, written about by Pliny,[6] was an ingredient of Jewish holy incense, and was formerly greatly valued but cannot now be identified in today's markets.

The word myrrh corresponds with a common Semitic root m-r-r meaning "bitter", as in Arabic مُرّ murr and Aramaic ܡܪܝܪܐ murr . Its name entered the English language from the Hebrew Bible, where it is called מור mor, and later as a Semitic loanword[7] was used in the Greek myth of Myrrha, and later in the Septuagint; in the Ancient Greek language, the related word μῠ́ρον (múron) became a general term for perfume. 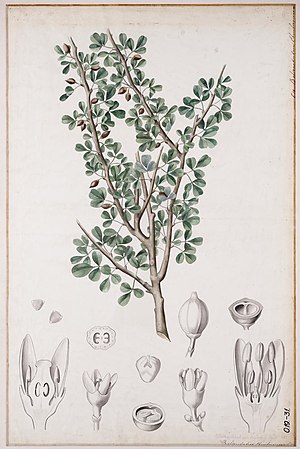 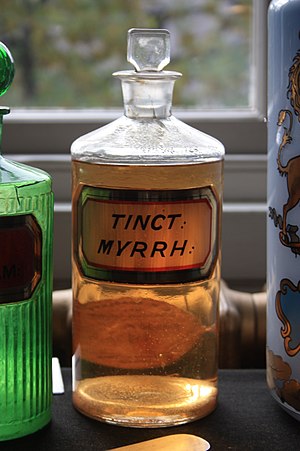 An old bottle of Tincture of Myrrh

In pharmacology, myrrh is used as an antiseptic in mouthwashes, gargles, and toothpastes.[8] It is also used in some liniments and healing salves that may be applied to abrasions and other minor skin ailments. Myrrh has been used as an analgesic for toothaches and can be used in liniment for bruises, aches, and sprains.[9]

Myrrh is a common ingredient of tooth powders. Myrrh and borax in tincture can be used as a mouthwash, however long term exposure to borax can be harmful to internal organs. A compound tincture, or horse tincture, using myrrh is used in veterinary practice for healing wounds.

In traditional Chinese medicine, myrrh is classified as bitter and spicy, with a neutral temperature. It is said to have special efficacy on the heart, liver, and spleen meridians as well as "blood-moving" powers to purge stagnant blood from the uterus. It is therefore recommended for rheumatic, arthritic, and circulatory problems, and for amenorrhea, dysmenorrhea, menopause, and uterine tumours.

Myrrh's uses are similar to those of frankincense, with which it is often combined in decoctions, liniments, and incense. When used in concert, myrrh is "blood-moving" while frankincense is thought to move the qi, making it used for arthritic conditions.

It is combined with such herbs as notoginseng, safflower petals, angelica sinensis, cinnamon, and salvia miltiorrhiza, usually in alcohol, and used both internally and externally.[11]

Myrrh is used in Ayurveda and Unani medicine, which ascribe tonic and rejuvenative properties to the resin. It (daindhava) is used in many specially processed rasayana formulas in Ayurveda. However, non-rasayana myrrh is contraindicated when kidney dysfunction or stomach pain is apparent or for women who are pregnant or have excessive uterine bleeding.

A related species, called guggul in Ayurvedic medicine, is considered one of the best substances for the treatment of circulatory problems, nervous system disorders, and rheumatic complaints.[12][13]

In Ancient Egypt and Punt (Horn of Africa)

The 5th dynasty ruler of Egypt King Sahure recorded the earliest attested expedition to the land of Punt, modern day Horn of Africa particularly Somalia which brought back large quantities of myrrh, frankincense, malachite and electrum. Other products that were also brought back included wild animals, particularly cheetahs, the secretary bird (Sagittarius serpentarius), giraffes and Hamadryas baboons (which were sacred to the Ancient Egyptians), ebony, ivory and animal skins. Sahure is shown celebrating the success of this venture in a relief from his mortuary temple which shows him tending a myrrh tree in the garden of his palace named "Sahure's splendor soars up to heaven". This relief is the only one in Egyptian art depicting a king gardening.[14] Myrrh was used by the ancient Egyptians, along with natron, for the embalming of mummies.[15]

In the Hebrew Bible

Myrrh is mentioned as a rare perfume in several places in the Hebrew Bible. In Genesis 37:25, the traders to whom Jacob's sons sold their brother Joseph had "camels ... loaded with spices, balm, and myrrh," and Exodus 30:23–25 specifies that Moses was to use 500 shekels of liquid myrrh as a core ingredient of the sacred anointing oil.

Myrrh was an ingredient of Ketoret: the consecrated incense used in the First and Second Temples at Jerusalem, as described in the Hebrew Bible and Talmud. An offering was made of the Ketoret on a special incense altar and was an important component of the temple service. Myrrh is also listed as an ingredient in the holy anointing oil used to anoint the tabernacle, high priests and kings.

Oil of myrrh is used in Esther 2:12 in a purification ritual for the new queen to King Ahasuerus:

Now when every maid's turn was come to go in to king Ahasuerus, after that she had been twelve months, according to the manner of the women, (for so were the days of their purifications accomplished, to wit, six months with oil of myrrh, and six months with sweet odours, and with other things for the purifying of the women).

Myrrh was recorded in the first century BC by Diodorus Siculus to have been traded overland and by sea via Nabatean caravans and sea ports, which transported it from Southern Arabia to their capital city of Petra, from which it was distributed throughout the Mediterranean region.[16]

Myrrh is mentioned in the New Testament as one of the three gifts (with gold and frankincense) that the magi "from the East" presented to the Christ Child (Matthew 2:11). Myrrh was also present at Jesus' death and burial. Jesus was offered wine and myrrh at his crucifixion (Mark 15:23). According to John's Gospel, Nicodemus and Joseph of Arimathea brought a 100-pound mixture of myrrh and aloes to wrap Jesus' body (John 19:39). The Gospel of Matthew relates that as Jesus went to the cross, he was given vinegar to drink mingled with gall: and when he had tasted thereof, he would not drink (Matthew 27:34); the Gospel of Mark describes the drink as wine mingled with myrrh (Mark 15:23).

Because of its mention in the New Testament, myrrh is an incense offered during some Christian liturgical celebrations (see Thurible). Liquid myrrh is sometimes added to egg tempera in the making of icons. Myrrh is mixed with frankincense and sometimes more scents and is used in the Eastern Orthodox, Oriental Orthodox, traditional Roman Catholic, and Anglican/Episcopal churches.

Myrrh is also used to prepare the sacramental chrism used by many churches of both Eastern and Western rites. In the Middle East, the Eastern Orthodox Church traditionally uses oil scented with myrrh (and other fragrances) to perform the sacrament of chrismation, which is commonly referred to as "receiving the Chrism".

According to the hadith of Muhammad, narrated by Abu Nuaim on the authority of Abban bin Saleh bin Anas, Muhammad said, "Fumigate your houses with mugwort, myrrh and thyme." (Kanz-ul-Ummal).[17] The Encyclopedia of Islamic Herbal Medicine mentions the same hadith: "The Messenger of Allah stated, 'Fumigate your houses with al-shih, murr, and sa'tar.'" The author states that this use of the word "murr" refers specifically to Commiphora myrrha.[18] The other two are Al-Shih (possibly mugwort) and Sa'tar (or Za'atar - thyme).

Pedanius Dioscorides described the myrrh of the first century AD as most likely to refer to a "species of mimosa", describing it "like the Egyptian thorn". He describes its appearance and leaf structure as "spinnate-winged".[19]