From Biblical History & Civilization
Jump to navigation Jump to search
This article is about Obadiah in the Old Testament, particularly the prophet to whom authorship of the Book of Obadiah is attributed. For other uses, see Obadiah (disambiguation).

Obadiah (/ˌoʊbəˈdaɪ.ə/; Hebrew: עֹבַדְיָה‎ – ʿŌḇaḏyāh or עֹבַדְיָהוּ‎ – ʿŌḇaḏyāhū; "servant of Yah") is a biblical theophorical name, meaning "servant or slave of Yahweh" or "worshiper of Yahweh."[2] The form of Obadiah's name used in the Septuagint is Obdios. In Latin it is translated as Abdias while in Arabic it is either ʿAbdullah (عبد الله), Ubaydah (عبيده), or Ubaidullah (عبیدالله). The Bishops' Bible refers to the prophet as Abdi.

The political situation implied in the prophecy points to a time after the Exile, probably in the mid-fifth century B.C. No value can be attributed to traditions identifying this prophet with King Ahab's steward (... so Babylonian Talmud, Sanhedrin 39b) or with King Ahaziah's captain (... so Pseudo-Epiphanius...). 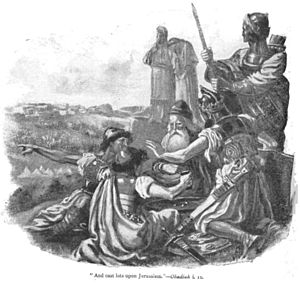 According to the Talmud, Obadiah is said to have been a convert to Judaism from Edom,[4] a descendant of Eliphaz, the friend of Job. He is identified with the Obadiah who was the servant of Ahab, and it is said that he was chosen to prophesy against Edom because he was himself an Edomite. Moreover, having lived with two such godless persons as Ahab and Jezebel without learning to act as they did, he seemed the most suitable person to prophesy against Esau (Edom).

Obadiah is supposed to have received the gift of prophecy for having hidden the "hundred prophets" (1 Kings 18:4) from the persecution of Jezebel.[4] He hid the prophets in two caves, so that if those in one cave should be discovered those in the other might yet escape (1 Kings 18:3–4).

Obadiah was very rich, but all his wealth was expended in feeding the poor prophets, until, in order to be able to continue to support them, finally he had to borrow money at interest from Ahab's son Jehoram.[5] Obadiah's fear of God was one degree higher than that of Abraham; and if the house of Ahab had been capable of being blessed, it would have been blessed for Obadiah's sake.[4]

In some Christian traditions he is said to have been born in "Sychem" (Shechem), and to have been the third captain sent out by Ahaziah against Elijah.[6][7] The date of his ministry is unclear due to certain historical ambiguities in the book bearing his name, but is believed to be around 586 B.C. 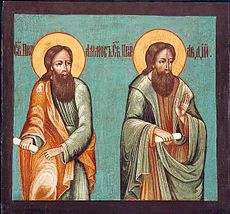 He is regarded as a saint by several Eastern churches. His feast day is celebrated on the 15th day of the Coptic Month Tobi (January 23/24) in the Coptic Orthodox Church. The Eastern Orthodox Church and those Eastern Catholic Churches which follow the Byzantine Rite celebrate his memory on November 19. (For those churches which follow the traditional Julian Calendar, November 19 currently falls on December 2 of the modern Gregorian Calendar.)

He is celebrated on February 28 in the Syriac and Malankara Churches, and with the other Minor prophets in the Calendar of saints of the Armenian Apostolic Church on July 31.

According to an old tradition, Obadiah is buried in Sebastia, at the same site as Elisha and where later the body of John the Baptist was believed to have been buried by his followers.[8]

It is related to "Abdeel", "servant of God", which is also cognate to the Arabic name "Abdullah" or "Obaidullah". The equivalent Turkish name is Abdil or Abdi.

Some Islamic scholars identify the prophet Dhu al-Kifl with Obadiah.[9]

Other Obadiahs in the Hebrew Bible

Other individuals named Obadiah in the Old Testament are listed as: