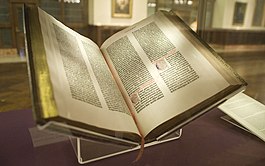 The Bible (from Koine Greek τὰ βιβλία, tà biblía, "the books") is a collection of religious texts, writings, or scriptures sacred to Jews, Samaritans, Christians, Rastafaris, and others. It appears in the form of an anthology, a compilation of texts of a variety of forms that are all linked by the belief that they are collectively revelations of God. These texts include theologically-focused historical accounts, hymns, prayers, proverbs, parables, didactic letters, admonitions, essays, poetry, and prophecies. Believers also generally consider the Bible to be a product of divine inspiration.

Those books that are included in the Bible by a tradition or group are called canonical, indicating that the tradition/group views the collection as the true representation of God's word and will. A number of biblical canons have evolved, with overlapping and diverging contents from denomination to denomination. The Hebrew Bible shares most of its content with its ancient Greek translation, the Septuagint, which in turn was the base for the Christian Old Testament. The Christian New Testament is a collection of writings by early Christians, believed to be Jewish disciples of Christ, written in first-century Koine Greek. Among Christian denominations there is some disagreement about what should be included in the canon, primarily about the biblical apocrypha, a list of works that are regarded with varying levels of respect or recognition.

Attitudes towards the Bible also differ among Christian groups. Roman Catholics, High Church Anglicans, Methodists and Eastern Orthodox Christians stress the harmony and importance of both the Bible and sacred tradition, while many Protestant churches focus on the idea of sola scriptura, or scripture alone. This concept rose to prominence during the Reformation, and many denominations today support the use of the Bible as the only infallible source of Christian teaching. Others, though, advance the concept of prima scriptura in contrast, meaning scripture primarily or scripture mainly.

The Bible has had a profound influence on literature and history, especially in the Western world, where the Gutenberg Bible was the first book printed using movable type. According to the March 2007 edition of Time, the Bible "has done more to shape literature, history, entertainment, and culture than any book ever written. Its influence on world history is unparalleled, and shows no signs of abating." With estimated total sales of over five billion copies, it is widely considered to be the best-selling book of all time. As of the 2000s, it sells approximately 100 million copies annually. Template:/box-footer