According to the Book of Genesis, Reuben or Re'uven (Hebrew: רְאוּבֵן‎, Standard Rəʾūven Tiberian Rəʾūḇēn) was the eldest son of Jacob and Leah. He was the founder of the Israelite Tribe of Reuben.

The text of the Torah gives two different etymologies for the name of Reuben, which textual scholars attribute to different sources: one to the Yahwist and the other to the Elohist;[4] the first explanation given by the Torah is that the name refers to God having witnessed Leah's misery, in regard to her status as the less-favourite of Jacob's wives, implying that the etymology of Reuben derives from raa beonyi, meaning he has seen my misery; the second explanation is that the name refers to Leah's hope that Reuben's birth will make Jacob love her, implying a derivation from yeehabani, meaning he will love me. Another Hebrew phrase to which Reuben is particularly close is ra'a ben, meaning behold, a son, which is how classical rabbinical literature interpreted it, although some of these sources argue that Leah was using the term to make an implied distinction between Reuben and Esau, his uncle.[5][6] Some scholars suspect that the final consonant may originally have been an l (similar to an n in the early Hebrew alphabet), and Josephus rendered the name as Reubel; it is thus possible that Reuben's name is cognate with the Arabic term Ra'abil, meaning wolves.[7] 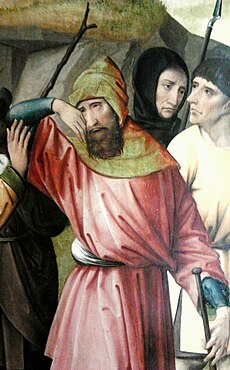 Reuben and his brothers by Colijn de Coter, ca. 1500, fragment of a painting in the National Museum in Warsaw

In the Torah, Reuben is briefly described as having had sexual activity with Bilhah, his step-mother's maid and father's concubine.[8] On his deathbed, Jacob declares that Reuben "will no longer excel, for you went up onto your father's bed, onto my couch and defiled it".[9] Reuben's behaviour angered Jacob to the extent that he gave Reuben's birthright (as firstborn) to Joseph: a comment within 1 Chronicles 5:1 makes the same point. Classical rabbinical sources argue that the birthright had included the right of his descendants (the tribe of Reuben) to become ruler over the tribes (transferred to Judah) and priests (transferred to Levi). However, some of these sources argue that Reuben had not actually had sexual activity with Bilhah, but instead had simply supported the cause of his mother Leah, by harming that of Bilhah, angering Jacob; in these sources, it is argued that after the death of Rachel (Jacob's favourite wife), Jacob sought to give the precedence to Bilhah, as he had formerly preferred her as his mistress, and Reuben removed Bilhah's bed from the place where Jacob wished to have it. The classical rabbinical texts argue that Reuben immediately showed contrition for his actions in regard to Bilhah, and thus was the first penitent; initially, according to these sources, Reuben practiced penitence by secretly meditating, and also by abstaining from meat and wine, but when Judah confessed to the matter of Tamar, Reuben admitted what he had done, lest his other brothers might be suspected of his deed and punished for it. The classical sources go on to state that in honour of this voluntary penance and confession, God gave the tribe of Reuben Hosea as a member, and Reuben was given a reward in the future world.[5]

Although part of the plot against Joseph, it is Reuben who persuades the others not to kill Joseph, tries to rescue him,[10] and who later concludes that the trouble the brothers run into in Egypt was divine punishment for the plot.[11] In classical rabbinical literature, Reuben is described as being motivated by a sense of responsibility over his brothers (since he was the eldest), and as having become angry when he discovers that Joseph had gone missing as a result of his brothers selling him to Ishmaelites[12] (textual scholars attribute this version of the narrative to the Yahwist[13]) or Joseph being found and taken by Midianites[14] (textual scholars attribute this version of the narrative to the Elohist[13]). The rabbinical sources argue that the first cities of refuge were located in the territory of the tribe of Reuben, since Reuben (the individual) had tried to save Joseph from the mob of his brothers.[5] 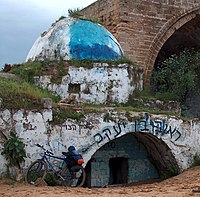 Classical rabbinical sources argue that Reuben was born on 14 Kislev, and died at the age of 125. The midrashic Book of Jasher argues that when he died, Reuben's body was placed in a coffin, and was later taken back to Israel, where it was buried.[5]

According to Genesis 46:9, Reuben had four sons: Hanoch, Phallu, Hezron, and Carmi. The name(s) of his wife/wives are not given. According to Joshua 15:6, a stone of Bohan, the son of Reuben marked a point along the boundary of the land allocated to the tribe of Judah. According to the Book of Jasher, Chapter 45, Reuben's wife was Eliuram the daughter of Ewi the Canaanite (of Timnah).