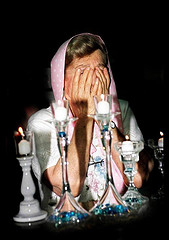 Welcoming the Sabbath with the lighting of Shabbat candles

In Abrahamic religions, the Sabbath (/ˈsæbəθ/) or Shabbat (Hebrew: שַׁבָּת‎) is a day set aside for rest and worship. According to the Book of Exodus, the Sabbath is a day of rest on the seventh day, commanded by God to be kept as a holy day of rest, as God rested from creation.[1] The practice of observing the Sabbath (Shabbat) originates in the biblical commandment "Remember the sabbath day, to keep it holy".

Sabbath (as the verb שָׁבַת֙ shabbat) is first mentioned in the Genesis creation narrative, where the seventh day is set aside as a day of rest (in Hebrew, shabbat) and made holy by God (Genesis 2:2–3). Observation and remembrance of Sabbath (Hebrew: שַׁבָּת‎ shabbat) is one of the Ten Commandments (the fourth in the original Jewish, the Eastern Orthodox, and most Protestant traditions, the third in Roman Catholic and Lutheran traditions).

Most Jews who observe the Sabbath regard it as having been instituted as a perpetual covenant for the Israelites (Exodus 31:13–17), as a sign respecting two events: the day during which God rested after having completed Creation in six days (Exodus 20:8–11) and the Israelites' deliverance from Egypt (Deuteronomy 5:12–15). However, most Sabbath-keeping Christians regard the Sabbath as having been instituted by God at the end of Creation week and that the entire world was then, and continues to be, obliged to observe the seventh day as Sabbath.

Originally, Sabbath-breakers were officially to be cut off from the assembly or potentially killed (Exodus 31:15). Observance in the Hebrew Bible was universally from sixth-day sundown to seventh-day sundown (Nehemiah 13:19, cf. Leviticus 23:32),[2] on a seven-day week. Consultations with prophets (II Kings iv. 23) were sought on the Sabbath.[3] Sabbath corporate worship was not prescribed for the community at large, and the Sabbath activities at the shrines were originally a convocation of priests for the purpose of offering divine sacrifices, with family worship and rest being centered in homes.[4][5]

Jewish Shabbat (Shabbath, Shabbes, Shobos, etc.) is a weekly day of rest, observed from sundown on Friday until the appearance of three stars in the sky on Saturday night. It is also observed by a minority of Christians, such as adherents of Messianic Judaism and Seventh-day Adventists. Thirty-nine activities prohibited on Shabbat are listed in Tractate Shabbat (Talmud). Customarily, Shabbat is ushered in by lighting candles shortly before sunset, at halakhically calculated times that change weekly and geographically. The Dead Sea Scrolls Uncovered, a translation by Robert Eisenman and Michael Wise, reveals the Essene calendar as celebrating the Sabbath commencing on the 4th day of Abib (Nisan) page 192 3 days after the new moon of the Passover month then celebrated on the 11th, 18th and 25th. The second Essene month reveals a Sabbath on the second day exactly 7 days from the 25th of Abib Sabbath witnessing a solar calendar continuation for the rest of the year. The Essenes did it this way to be in harmony with the book of Genesis where God created the moon and sun on the 4th day and rested 3 days later.

Judah ha-Levi (12th century) proposed a nascent Jewish date line for dating of Shabbat, later calculated to fall between China and Japan (other lines exist, and travelers are expected to note both personal and local Shabbat); and Pinchas Elijah Horovitz (18th century) stated that polar regions should observe Shabbat based on calculating 24-hour days, although without establishing a date line.

Shabbat is a widely noted hallmark of Jewish peoples. Subbotniks (literally, Sabbatarians) are a Russian sect, categorized as either Jews or Judaizing Christians, that became particularly branded by strict Shabbat observance; (Hungarian-born radical Reform leader Ignaz Einhorn even shifted his congregation's Shabbat worship to Sundays.) Several weekly Shabbats per year are designated as Special Sabbaths, such as Shabbat haGadol, prior to Pesach (literally, "the High Sabbath", but not to be confused with other High Sabbaths); and Shabbat Teshuvah, prior to Yom Kippur ("Repentance Sabbath").

Colloquially, in contemporary Israel, the term Shabbaton or Shaboson may mean an event or program of education and usually celebration held on Shabbat, or over an entire weekend with main focus on Shabbat. Such events are held by youth groups, singles groups, synagogues, schools, social groups, charitable groups or family reunions, can be either multi-generational and wide-open or limited-group, and can be held where a group usually meets or offsite. "Shabbaton", rather than just "retreat", signifies recognition of the importance of Shabbat in the event or program.Template:Citation Needed. Another meaning of the term is what in English is called "Sabbatical", a period of paid leave from work, common mostly in educational systems.

In Eastern Christianity, the Sabbath is considered still to be on Saturday, the seventh day, in remembrance of the Hebrew Sabbath. In Catholicism and most branches of Protestantism, the "Lord's Day" (Greek Κυριακή) is considered to be on Sunday, the first day (and "eighth day"). Communal worship, including the Holy Mysteries, may take place on any day, but a weekly observance of the resurrection is made consistently on Sunday. Western Christianity sometimes refers to the Lord's Day as a "Christian Sabbath", distinct from the Hebrew Sabbath, but related in varying manner.

Since Puritan times, most English-speaking Protestants identify the "Lord's Day" (viz., Sunday) with a "Christian Sabbath", a term Roman Catholics in those areas may also celebrate with the Eucharist. It is considered both the first day and the "eighth day" of the seven-day week. In Tonga, all commerce and entertainment activities cease on Sunday, starting at midnight and ending the next day, at midnight, as Tonga's constitution declares the Sabbath sacred forever.[6] In Oriental Orthodoxy, the Ethiopian Orthodox Tewahedo Church has observed both Sunday Resurrection Day and Saturday Sabbath in different ways for several centuries, as have other Eastern Orthodox traditions.

Puritan Sabbatarianism or Reformed Sabbatarianism is strict observance of Sabbath in Christianity that is typically characterized by its avoidance of recreational activities. "Puritan Sabbath", expressed in the Westminster Confession of Faith, is often contrasted with "Continental Sabbath": the latter follows the Continental Reformed confessions such as the Heidelberg Catechism, which emphasize rest and worship on Lord's Day, but do not forbid recreational activities.

Several Christian denominations observe Sabbath in a similar manner to Judaism, though with observance ending at Saturday sunset instead of Saturday nightfall. Early church historians Sozomen and Socrates cite the seventh day as the Christian day of worship except for the Christians in Rome and Alexandria. Many Sabbatarian Judeo-Christian groups were attested during the Middle Ages. The Waldensians, a religious group founded during the 12th century, are regarded as one of the first Post-Constantinian Christian groups to observe the seventh-day Sabbath. The Szekler Sabbatarians were founded in 1588 from among the Unitarian Church of Transylvania and maintained a presence until the group converted to Judaism in the 1870s. Seventh Day Baptists have observed Sabbath on Saturday since the mid-17th century (either from sundown or from midnight), and influenced the (now more numerous) Seventh-day Adventists in America to begin the practice in the mid-19th century. They believe that keeping seventh-day Sabbath is a moral responsibility equal to that of any of the other Ten Commandments, based on the example of Jesus. They also use "Lord's Day" to mean the seventh day, based on Scriptures in which God calls the day "my Sabbath" (Exodus 31:13) and "to the LORD" (Exodus 16:23) and in which Jesus calls himself "Lord of Sabbath" (Matthew 12:8). The question of defining Sabbath worldwide on a round earth was resolved by some seventh-day Sabbatarians by making use of the International Date Line (i.e., permitting local rest-day adjustment, Esther 9:16–19), while others (such as some Alaskan Sabbatarians) keep Sabbath according to Jerusalem time (i.e., rejecting manmade temporal customs, Daniel 7:25). Many of the Lemba in southern Africa, like some other African tribes, are Jewish and claim common descent from the Biblical Israelites, based on observing traditional Jewish customs. Genetic analysis has also demonstrated that a distinct group of the Lemba, have the oral history and genetic ancestry of early hebrews. The Lemba keep one day a week holy like Sabbath, and maintain many beliefs and practices associated with Judaism.[7][8]

Main articles: Sabbath in Christianity and Sabbath in seventh-day churches

In 321 AD, Roman emperor Constantine the Great enacted the first civil law regarding Sunday observance. The law did not mention the Sabbath by name, but referred to a day of rest on "the venerable day of the sun."

On the venerable day of the sun let the magistrate and people residing in cities rest, and let all workshops be closed. In the country however, persons engaged in agricultural work may freely and lawfully continue their pursuits; because it often happens that another day is not so suitable for grain growing or for vine planting; lest by neglecting the proper moment for such operations the bounty of heaven should be lost.[9]

An Abridgment of the Christian Doctrine:

Q. How prove you that the church hath power to command feasts and holy days?
A. By the very act of changing the Sabbath into Sunday, which Protestants allow of; and therefore they fondly contradict themselves, by keeping Sunday strictly, and breaking most other feasts commanded by the same church.
Q. How prove you that?
A. Because by keeping Sunday, they acknowledge the church’s power to ordain feasts, and to command them under sin; and by not keeping the rest [of the feasts] by her commanded, they again deny, in fact, the same power.[10]

They [the Catholics] allege the Sabbath changed into Sunday, the Lord’s day, contrary to the decalogue, as it appears; neither is there any example more boasted of than the changing of the Sabbath day. Great, they say, is the power and authority of the church, since it dispensed with one of the ten commandments.[11]

Q. Have you any other way of proving that the Church has power to institute festivals of precept?
A. Had she not such power, she could not have done that in which all modern religionists agree with her. She could not have substituted the observance of Sunday the first day of the week, for the observance of Saturday the seventh day, a change for which there is no Scriptural authority.[12]

Q. Has the [Catholic] church power to make any alterations in the commandments of God?
A. ...Instead of the seventh day, and other festivals appointed by the old law, the church has prescribed the Sundays and holy days to be set apart for God’s worship; and these we are now obliged to keep in consequence of God’s commandment, instead of the ancient Sabbath.[13]

The Catechism of the Council of Trent:

The Church of God has thought it well to transfer the celebration and observance of the Sabbath to Sunday![14]