The Second Epistle of Peter, often referred to as Second Peter and written 2 Peter or in Roman numerals II Peter (especially in older references), is a book of the New Testament of the Bible, traditionally held to have been written by Apostle Peter. Most critical biblical scholars have concluded Peter is not the author, considering the epistle pseudepigraphical.[1][2]

According to the Epistle itself, it was composed by the Apostle Peter, an eyewitness to Jesus' ministry. If 2 Peter 3:1 alludes to 1 Peter, the audience of the epistle is the various Churches in Asia Minor in general (cf. 1 Peter 1:1).

It criticizes "false teachers" who distort the authentic, apostolic tradition, and predicts judgment for them. 2 Peter explains that God is patient, and has not yet brought the Second Coming of Christ in order that more people will have the chance to reject evil and find salvation (3:3–9). It calls on Christians to wait patiently for the parousia and to study scripture.

The date of composition has proven to be very difficult to determine. Taken literally, it would have been written between 65–68 AD because Peter was martyred around 68 AD by Nero and also because Peter references his approaching death in 2 Peter 1:14 ("since I know that the putting off of my body will be soon, as our Lord Jesus Christ made clear to me").[3] 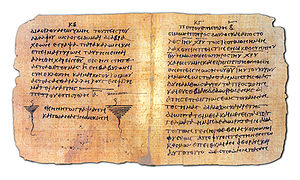 Two sides of the Papyrus Bodmer VIII. This Papyrus today is the oldest source to the Second Epistle of Peter.

Most biblical scholars have concluded Peter is not the author, considering the epistle pseudepigraphical.[1][2][4][5][6][7] Reasons for this include its linguistic differences from 1 Peter, its apparent use of Jude, possible allusions to 2nd-century gnosticism, encouragement in the wake of a delayed parousia, and weak external support.[8]

The questions of authorship and date are closely related. For Petrine authorship to be authentic, it must have been written prior to Peter's death in c. AD 65–67. The letter refers to the Pauline epistles and so must post-date at least some of them, regardless of authorship, thus a date before 60 is improbable. Further, it goes as far as to name the Pauline epistles as "scripture"—the only time a New Testament work refers to another New Testament work in this way—implying that it postdates them by some time.[7] Scholars consider the epistle to be written anywhere between c. AD 60-130, with a favour for a date between 80-90[9] and so contend that it is pseudepigraphical.

Acceptance of the letter into the canon did not occur without some difficulty; however, "nowhere did doubts about the letter's authorship take the form of definitive rejection."[10] The earliest record of doubts concerning the authorship of the letter were recorded by Origen (c. 185–254), though Origen mentioned no explanation for the doubts, nor did he give any indication concerning the extent or location. Donald Guthrie suggests that "It is fair to assume, therefore, that he saw no reason to treat these doubts as serious, and this would mean to imply that in his time the epistle was widely regarded as canonical."[10]

Origen, in another passage, has been interpreted as considering the letter to be Petrine in authorship.[11] Before Origen's time, the evidence is inconclusive;[12] there is a lack of definite early quotations from the letter in the writings of the Apostolic Fathers, though possible use or influence has been located in the works of Clement of Alexandria (d. c. 211), Theophilius (d. c. 183), Aristides (d. c. 134), Polycarp (d. 155), and Justin (d. 165).[13]

Eusebius (c. 275–339) professed his own doubts (see also Antilegomena), and is the earliest direct testimony of such, though he stated that the majority supported the text, and by the time of Jerome (c. 346–420) it had been mostly accepted as canonical.[14]

The Peshitta, the standard version of the Bible for churches in the Syriac tradition, does not contain the Second Epistle of Peter and thus rejects its canonical status.[15]

In both content and style this letter is very different from 1 Peter. The epistle presciently declares that it is written shortly before the apostle's death (1:14). Arguments have been made both for and against this being part of the original text, but this debate largely is centered on the acceptance or rejection of supernatural intervention in the life of the writer.[16]

The epistle contains eleven references to the Old Testament. In 3:15, 16 a reference is made to one of Paul's epistles, which some have identified as 1 Thessalonians 4:13–5:11.

Tartarus is mentioned in 2 Peter 2:4 as devoted to the holding of certain fallen angels. It is elaborated on in Jude 6. Jude 6 however, is a clear reference to the Book of Enoch. Bauckham suggests that 2 Peter 2:4 is partially dependent on Jude 6 but is independently drawing on paraenetic tradition that also lies behind Jude 5–7. The paraenetic traditions are in Sirach 16:7–10, Damascus Document 2:17–3:12, 3 Maccabees 2:4–7, Testament of Naphtali 3:4–5 and Mishna Sanhedrin 10:3.[19]

The letter is usually outlined as follows:[citation needed]

Online translations of the epistle