After the death of the last Nevi'im (Jewish prophets) of antiquity and still under Persian rule, the leadership of the Jewish people was in the hands of five successive generations of zugot ("pairs of") leaders. They flourished first under the Persians (c. 539 – c. 332 BCE), then under the Greeks (c. 332–167 BCE), then under an independent Hasmonean Kingdom (140–37 BCE), and then under the Romans (63 BCE – 132 CE).

During this period, Second Temple Judaism can be seen as shaped by three major crises and their results, as various groups of Jews reacted to them differently. First came the destruction of the Kingdom of Judah in 587/6 BCE, when the Judeans lost their independence, monarchy, holy city and First Temple and were partly exiled to Babylon. They consequently faced a theological crisis involving the nature, power, and goodness of God and were also threatened culturally, ethnically, and ceremonially as they were thrown into proximity with other peoples and religious groups. The absence of recognized prophets later in the period left them without their version of divine guidance at a time when they felt most in need of support and direction.[2] The second crisis was the growing influence of Hellenism in Judaism, which culminated in the Maccabean Revolt of 167 BCE. The third crisis was the Roman occupation of the region, beginning with Pompey and his sack of Jerusalem in 63 BCE.[2] This included the appointment of Herod the Great as King of the Jews by the Roman Senate, and the establishment of the Herodian Kingdom of Judea comprising parts of what today are Israel, Palestinian territories, Jordan, Lebanon and Syria.

Construction of the Second Temple 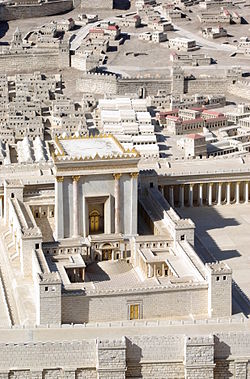 Model of the Second Temple of Jerusalem, Israel Museum, Jerusalem

Construction of the Second Temple was completed under the leadership of the last three Jewish Prophets Haggai, Zechariah and Malachi with Persian approval and financing.

Based on the biblical account, after the return from Babylonian captivity under Zerubbabel, arrangements were almost immediately made to reorganize the desolated Yehud Province after the demise of the Kingdom of Judah seventy years earlier. The body of pilgrims, forming a band of 42,360,[3] having completed the long and dreary journey of some four months, from the banks of the Euphrates to Jerusalem, were animated in all their proceedings by a strong religious impulse, and therefore one of their first concerns was to restore their ancient house of worship by rebuilding their destroyed Temple and reinstituting the sacrificial rituals known as the korbanot.

On the invitation of Zerubbabel, the governor, who showed them a remarkable example of liberality by contributing personally 1,000 golden darics, besides other gifts, the people poured their gifts into the sacred treasury with great enthusiasm.[4] First they erected and dedicated the altar of God on the exact spot where it had formerly stood, and they then cleared away the charred heaps of debris which occupied the site of the old temple; and in the second month of the second year (535 BCE), amid great public excitement and rejoicing, the foundations of the Second Temple were laid. A wide interest was felt in this great movement, although it was regarded with mingled feelings by the spectators.[5][6]

The Samaritans, the inhabitants of the capital of what had been Israel, made proposals for co-operation in the work. Zerubbabel and the elders, however, declined all such cooperation, feeling that the Jews must build the Temple without help. Immediately evil reports were spread regarding the Jews. According to Ezra 4:5, the Samaritans sought to "frustrate their purpose" and sent messengers to Ecbatana and Susa, with the result that the work was suspended. 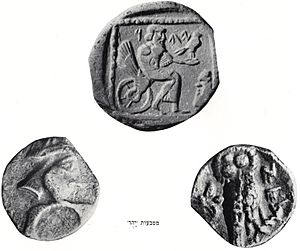 Yehud coins: coins minted in the province of Judea during the Persian period.

Seven years later, Cyrus the Great, who allowed the Jews to return to their homeland and rebuild the Temple, died,[7] and was succeeded by his son Cambyses. On his death, the "false Smerdis", an imposter, occupied the throne for some seven or eight months, and then Darius I of Persia became king (522 BCE). In the second year of this monarch the work of rebuilding the temple was resumed and carried forward to its completion,[8] under the stimulus of the earnest counsels and admonitions of the prophets Haggai and Zechariah. It was ready for consecration in the spring of 516 BCE, more than twenty years after the return from captivity. The Temple was completed on the third day of the month Adar, in the sixth year of the reign of King Darius, amid great rejoicings on the part of all the people[9] although it was evident that the Jews were no longer an independent people, but were subject to a foreign power. The Book of Haggai includes a prediction[10] that the glory of the last temple would be greater than that of the first.

In 332 BCE the Persians were defeated by Alexander the Great. After his demise, and the division of Alexander's empire among his generals, the Seleucid Kingdom was formed.

During this time currents of Judaism were influenced by Hellenistic philosophy developed from the 3rd century BCE, notably the Jewish diaspora in Alexandria, culminating in the compilation of the Septuagint. An important advocate of the symbiosis of Jewish theology and Hellenistic thought is Philo.

A deterioration of relations between hellenized Jews and religious Jews led the Seleucid king Antiochus IV Epiphanes to impose decrees banning certain Jewish religious rites and traditions. Consequently, the orthodox Jews revolted under the leadership of the Hasmonean family, (also known as the Maccabees). This revolt eventually led to the formation of an independent Judean kingdom, under the Hasmonaean Dynasty, which lasted from 165 to 37 BCE. The Hasmonean Dynasty eventually disintegrated as a result of civil war between the sons of Salome Alexandra—Hyrcanus II and Aristobulus II. The people, who did not want to be governed by a king but by theocratic clergy, made appeals in this spirit to the Roman authorities. A Roman intervention in the civil war in Judea was then made, following Syrian campaign of conquest and annexation, led by Pompey. The pro-Parthian Hasmonean rival brother however soon brought Parthian support and the throne changed until Herod the Great established himself as a new pro-Roman king of Judea.

Herod the Great was a Roman client king of Judea, referred to as the Herodian kingdom. As a close and loyal ally to the Romans, Herod extended his rule as far as Arabia, created ambitious projects of construction across Judea, including the expansion of the Second Temple in Jerusalem. The Herodian kingdom under Herod experienced a period of growth and expansion. Many of the most popular tourist destinations in Israel today, including the Western Wall and Tower of David, were built by Herod.[11]

After Herod's death in 4 BCE, the kingdom was partitioned to several parts to each of his three sons (initially four parts), forming the Tetrarchy. The central part of the Tetrarchy was given to Herod Archelaus, including Judea proper, Idumea and Samaria. Herod's death in 4 BCE caused the release of built up frustrations of the people who were suppressed by his brutality. Many people were impoverished because of Herod's high taxes and spending. When he died, his building projects that once allowed for job opportunities were stopped, and many people lost their jobs. This built up frustrations that ultimately contributed to the causes of the First Jewish–Roman War.[12]

In 6 CE, the country fell into unrest, and the Herodian ruler of Judea was deposed in favor of forming a new Roman province, Roman Judea. Herod II ruled Ituraea and Trachonitis until his death in 34 CE when he was succeeded as tetrarch by Herod Agrippa I, who had previously been ruler of Chalcis. Agrippa surrendered Chalcis to his brother Herod and ruled in Philip's stead. On the death of Herod Antipas in 39 CE Herod Agrippa became ruler of Galilee also, and in 41 CE, as a mark of favour by the Emperor Claudius, succeeded the Roman prefect Marullus as ruler of Judea.

The era from roughly 4 BCE to 33 CE is also notable as being the time period when Jesus of Nazareth lived, primarily in Galilee, under the reign of Herod Antipas. It is therefore considered in specifically Jewish history as being when Christianity arose as a messianic sect from within Second Temple Judaism.

The Roman province of Judaea extended over parts of the former regions of the Hasmonean and Herodian kingdoms. It was created in 6 CE with the Census of Quirinius and merged into Syria Palaestina after 135 CE.