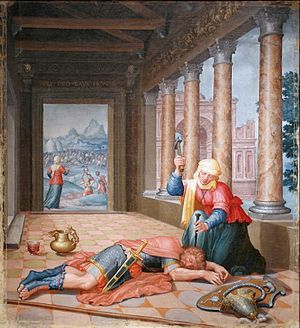 Sisera (Hebrew: סִיסְרָא‎ Sîsərā) was commander of the Canaanite army of King Jabin of Hazor, who is mentioned in Judges 4–5 of the Hebrew Bible. After being defeated by the forces of the Israelite tribes of Zebulun and Naphtali under the command of Barak and Deborah, Sisera was killed by Jael, who hammered a tent peg into his temple.

According to the biblical book of Judges, Jabin, King of Hazor, oppressed the Israelites for twenty years. His general was Sisera, who commanded nine hundred iron chariots from Harosheth Haggoyim, a fortified cavalry base.[1] After the prophetess Deborah persuaded Barak to face Sisera in battle, they, with an Israelite force of ten thousand, defeated him at the Battle of Mount Tabor on the plain of Esdraelon. Judges 5:20 says that "the stars in their courses fought against Sisera", and the following verse implies that the army was swept away by the Wadi Kishon.[2] Following the battle, there was peace for forty years.[3]

After the battle, Sisera fled on foot until he came to campsite of Heber the Kenite in the plain of Zaanaim, where he was received by Jael, Heber's wife. Jael brought him into her tent with apparent hospitality and gave him milk. Jael promised to hide Sisera and covered him with a rug; but after he fell asleep, she drove a tent peg through his temple with a mallet, her blow being so forceful that the peg pinned his head to the ground.[4]

Later, during his farewell address, the prophet Samuel referred to the Israelites' subjection to Sisera as a consequence of their "forgetting the LORD their God".[5]

The etymology of Sisera's name is unclear.[6] Sisera's name has been variously identified as Philistine, Hittite, Hurrian, or Egyptian (Ses-Ra, "servant of Ra").[7] The Israeli scholar and archaeologist Adam Zertal identifies Sisera with the sea people called Shardana (or Sherden), arguing that Sisera came from the island of Sardinia.[8] Zertal and Oren Cohen proposed that the excavation at El-Ahwat, between Katzir-Harish and Nahal Iron, is the site of Harosheth Haggoyim, Sisera's military base.[8][9] However, consensus has not been reached regarding the site of Harosheth Haggoyim. Niditch suggests that its association with the term haroset might indicate its placement at any number of wooded places.[6]

The Jewish Encyclopedia reports that possibly his father was Shamgar.[10] According to Jewish legend, because Sisera's mother cried a hundred cries when he did not return home, a hundred blasts are blown on the shofar on Rosh Hashana, the Jewish New Year.[11] The Talmud states that the descendants of Sisera studied Torah in Jerusalem and even taught children there.[12][13] A direct descendant of Sisera was Rabbi Akiva.[14][15]

According to the Talmud, Jael engaged in sexual intercourse with Sisera seven times, but because she was attempting to exhaust him in order to kill him, her sin was for Heaven's sake and therefore praiseworthy.[16]

Also according to the Midrash,[17] Sisera had previously conquered every country against which he had fought. His voice was so strong that, when he called loudly, the most solid wall would shake and the wildest animal would fall dead. Deborah was the only one who could withstand his voice and not be stirred from her place. Sisera caught fish enough in his beard when bathing in the Kishon to provision his whole army, and thirty-one kings followed Sisera merely for the opportunity of drinking, or otherwise using, the waters of Israel.[13]