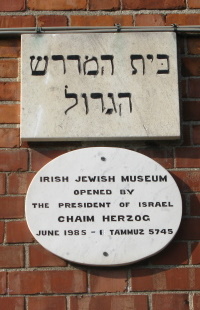 Inscription at the Irish Jewish Museum, with Gregorian and Hebrew dates.

Tammuz (Hebrew: תַּמּוּז‎: Standard Tammuz, Tiberian Tammûz), or Tamuz, is the tenth month of the civil year and the fourth month of the ecclesiastical year on the Hebrew calendar, and the modern Assyrian calendar. It is a month of 29 days, which occurs on the Gregorian calendar around June–July.

The name of the month was adopted from the Assyrian and Babylonian month Araḫ Dumuzu, named in honour of the Mesopotamian deity Dumuzid.

17 Tammuz is a fast day from 1 hour before sunrise to sundown in remembrance of Jerusalem's walls being breached. 17 Tammuz is the beginning of The Three Weeks, in which Jews follow similar customs as the ones followed during the Omer from the day following Passover until the culmination of the mourning for the death of the students of Rabbi Akiva (the 33rd day of the OmerTemplate:Spaced ndashsuch as refraining from marriage and haircuts.[1] The Three Weeks culminate with Tisha B'Av (9th of Av).

Ashkenazi communities refrain from wine and meat from the beginning of the month of Av, while Sefardi communities only do so from the second day of the month. The mourning continues until noon on the 10th of Av, the date on which the Second Temple's destruction was complete.

This list is incomplete; you can help by adding missing items with reliable sources.Template:TDMCA