The Citadel of Aleppo, northern Syria, on top of a tell occupied since at least the third millennium BC 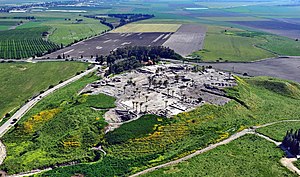 In archaeology, a tell or tel (borrowed into English from Arabic: تَل‎, tall, 'mound' or 'small hill'),[1] is an artificial topographical feature, a species of mound[lower-alpha 1] consisting of the stratified debris from the accumulated refuse of generations of people who once formed a settlement and dwelt on the same site.[3][lower-alpha 2] A classic tell looks like a low, truncated cone with sloping sides[5] and a flat, mesa-like top.[6] They can be more than 43 m (141 ft) high.[7]

Tells are formed from a variety of remains, including organic and cultural refuse, collapsed mudbricks and other building materials, water-laid sediments, residues of biogenic and geochemical processes, and aeolian sediment.[8] Tells are most commonly associated with the ancient Near East, but they are also found elsewhere, such as Southern Europe from Bulgaria to Greece[9] and in North Africa.[10][3][11][12] Within the Near East, they are concentrated in less arid regions, including Upper Mesopotamia, the Southern Levant, Anatolia and Iran, which had more continuous settlement.[13]

Tell has many cognates in Semitic languages, such as Ugaritic tl, Hebrew tel (תל) and Akkadian tillu(m). The Akkadian form corresponds to Sumerian DUL (which can also refer to a 'pile' of any material, like grain), but it is not known whether the similarity reflects a borrowing from that language, or if the Sumerian term itself was a loanword from an earlier Semitic substrate language.[14] If Akkadian tillu is related to another word in that language, til'u, meaning ‘woman’s breast’, there exists a similar term in the South Semitic classical Ethiopian language of Geʽez, namely təla/breast.[15]

The Hebrew tel first appears in the biblical book of Deuteronomy 13:16 (ca. 500–700 BCE),[16] describing a heap or small mound, and appearing in the books of Joshua and Ezekiel with the same meaning.

There are lexically unrelated equivalents for this geophysical concept of a town-mound in other Southwest Asian languages, including kom in Egyptian Arabic,[17] tepe or tappeh (Turkish/Persian: تپه‎), hüyük or höyük (Turkish), and chogha (Persian: چغا‎).[7] These often appear in place names,[18] and the word itself is one of the commonest prefixes for Palestinian toponyms.[19] The Arabic word khirbet or khirbat (خربة), meaning 'ruin', also occurs in the names of many archaeological tells, such as Khirbet et-Tell (lit. 'heap of ruins').[20]

Tell is first attested in English in 1840 in a report in the Journal of the Royal Geographical Society.[21] Variant spellings include tall, tel, til, and tal.[18]

An excavation area at Tell Barri, northeastern Syria. Note the person standing in the middle for scale.

It is thought that the earliest examples of tells are to be found in the Jordan Valley, such as at the 10 meter-high mound, dating back to the proto-Neolithic period, at Jericho in the West Bank.[3] Upwards of 5,000 tells have been detected in the area of ancient Israel, (including the area covered by modern Israel and Palestine) and Jordan.[22] Of these Paul Lapp calculated in the 1960s that 98% had yet to be touched by archaeologists.[22]

In Syria, tells are abundant in the Upper Mesopotamia region, in which they scatter along the Euphrates, including Tell al-'Abr, Tell Bazi, Tell Kabir, Tell Mresh, Tell Saghir and Tell Banat.[23] The latter is thought to be the site of the oldest war memorial (known as the White Monument), dated back to the 3rd millennium BC.[24]

Northeastern Bulgaria has a rich archaeological heritage of eneolithic[lower-alpha 3] tells from the 5th millennium BCE.[26]

In Neolithic Greece, there is a contrast between the northern Thessalian plain where rainfall was sufficient to permit densely populated settlements based on dry-farming and the more dispersed sites in southern Greece, such as the Peloponesus, where early villages sprang up around the smaller arable tracts close to springs, lakes and marshes.[27] There are two models to account for the tell structures of this part of southern Europe, one developed by Paul Halstead and the other by John Chapman. Chapman envisaged the tell as witness to a nucleated communal society, whereas Halstead emphasized the idea that they arose as individual household structures.[28] Thessalian tells often reflect small hamlets with a small population of around 40–80.[29]

The Toumbas of Macedonia and the Magoulas of Thessaly are the local names for tell sites in these regions of Greece.