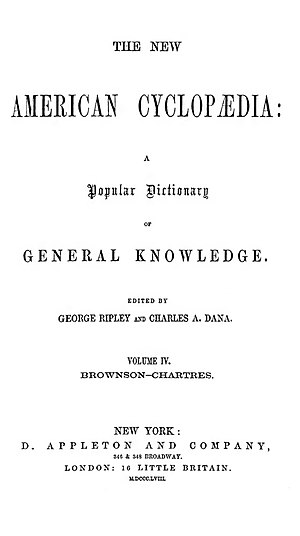 The New American Cyclopædia was an encyclopedia created and published by D. Appleton & Company of New York in 16 volumes, which initially appeared between 1858 and 1863. Its primary editors were George Ripley and Charles Anderson Dana.

The New American Cyclopædia was a general encyclopedia with a special focus on subjects related to the United States. As it was created over the years spanning the American Civil War, the focus and tone of articles could change drastically; for example, Jefferson Davis, the future president of the Confederate States of America, was treated at length as a United States Army soldier and US government politician.[2]

As was traditional, the entire set was re-issued with the publication in 1863 of the 16th volume. The whole Cyclopædia was again re-issued in 1864.

A notable contributor was Karl Marx, then a European correspondent for the New York Tribune, who, appeared as the writer, while most of those articles were written by Friedrich Engels, especially the articles on military affairs,[3] which belonged in Engels' domain in the division of labor between the two friends. Because of his deep knowledge of all things military, Engels had earned the nickname "General".[3] Marx wrote a highly unsympathetic biographical article on Simon Bolivar.[3][4]

Other prominent contributors to the first edition included[5]

An associated yearbook, Appletons' Annual cyclopaedia and register of important events of the year, was published from 1861 to 1875 and on to 1902.[6]

The cyclopaedia was revived under the title American Cyclopædia in 1873–6. A final edition was issued in 1883–4, which added supplements to each volume of the 1873 edition. Two analytical indexes were published separately in 1878 and 1884.[7]

Title page of the American Cyclopædia,1879
Retrieved from "https://bibleciv.org/index.php?title=The_American_Cyclopædia&oldid=2935"
Categories: