Tiberian Hebrew is the canonical pronunciation of the Hebrew Bible or Tanakh committed to writing by Masoretic scholars living in the Jewish community of Tiberias in ancient Galilee c. 750–950 CE under the Abbasid Caliphate. They wrote in the form of Tiberian vocalization,[1] which employed diacritics added to the Hebrew letters: vowel signs and consonant diacritics (nequdot) and the so-called accents (two related systems of cantillation signs or te'amim). These together with the marginal notes masora magna and masora parva make up the Tiberian apparatus.

Though the written vowels and accents came into use in around 750 CE, the oral tradition that they reflect is many centuries older, with ancient roots.

Today's Hebrew grammar books do not teach the Tiberian Hebrew that was described by the early grammarians. The prevailing view is that of David Qimchi's system of dividing the graphic signs into "short" and "long" vowels. The values assigned to the Tiberian vowel signs reveals a Sephardi tradition of pronunciation (the dual quality of qames (אָ) as /a/, /o/; the pronunciation of simple sheva (אְ) as /ɛ̆/).

The phonology of Tiberian Hebrew can be gleaned from the collation of various sources:

Tiberian Hebrew has 29 consonantal phonemes, represented by 22 letters. The sin dot distinguishes between the two values of ש‎, with a dot on the left (שׂ‎) being pronounced the same as the letter Samekh. The letters בגדכפת‎ (begadkefat) had two values each: plosive and fricative.

The following are the most salient characteristics of the Tiberian Hebrew consonantal pronunciation:

a) "Normal" Resh /ʀ/ pronounced thus (according to Eldar, as a uvular sound [ʀ]) in all other instances (except for the circumstances described below): אוֹר [ʔoʀ]

b) The "peculiar" resh [r] before or after Lamed or Nun, any of the three being vocalized with simple sheva and Resh after Zayin ז, Daleth ד, Samekh ס, Sin שׂ, Taw ת, Tzadi צ, Teth ט, any of them punctuated with simple sheva: יִשְׂרָאֵל [jisrɔˈʔel], עָרְלָה [ʕɔrˈlɔ]. Because of the proximity of a dental consonant, it is likely that Resh was then pronounced as an alveolar trill, as it still is in Sephardi Hebrew.

c) There is still another pronunciation, affected by the addition of a dagesh in the Resh in certain words in the Bible, which indicates it was doubled [ʀː]: הַרְּאִיתֶם [haʀːĭʔiˈθɛm]. As can be seen, this pronunciation has to do with the progressive increase in length of this consonant (הָרְאִיתֶם). It was preserved only by the population of Ma'azya (מעזיה), which is in Tiberias.

This vowel chart gives a general idea of the vowel space of Tiberian Hebrew. It is not meant to be a precise mapping of the tongue positions, which would be impossible to do anyway since there are no native speakers of Tiberian Hebrew. 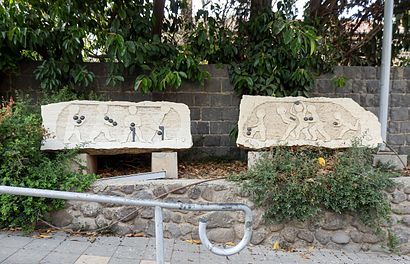 The vowel qualities /a e i ɔ o u/ have phonemic status: אָשָׁם הוּא אָשֹׁם אָשַׁם (Lev. 5:19) and אָשֵׁם 'guilty', אִם 'when' and אֵם 'mother'.[3] /ɛ/ has phonemic value in final stressed position רְעֶה רְעִי רָעָה, מִקְנֶה מְקַנֵּה, קָנֶה קָנָה קָנֹה, but in other positions, it may reflect loss of the opposition /a/: /i/.[3] By the Tiberian period, all short vowels in stressed syllables had lengthened, making vowel length allophonic.[4][nb 1] Vowels in open or stressed syllables had allophonic length (such as /a/ in יְרַחֵם, which was previously short).[5][nb 2]

The Tiberian tradition possesses three reduced (ultrashort, hatuf) vowels /ă ɔ̆ ɛ̆/ of which /ɛ̆/ has questionable phonemicity.[6][7][nb 3] /ă/, under a non-guttural letter, was pronounced as an ultrashort copy of the following vowel before a guttural (וּבָקְעָה [uvɔqɔ̆ˈʕɔ]) and as [ĭ] preceding /j/, (תְדַמְּיוּנִי [θăðammĭˈjuni]). However, it was always pronounced as [ă] under gutturals: חֲיִי [ħăˈji].[8][9]

The simple sheva sign changes its pronunciation depending on its position in the word (mobile/vocal or quiescent/zero) and its proximity to certain consonants.

In these examples, it has been preferred to show one in the Bible and represents each phenomenon in a graphic manner (a chateph vowel), but the rules still apply when there is only a simple sheva (depending on the manuscript or edition used).

When the simple sheva appears in any of the following positions, it is regarded as mobile (na):

The gutturals (אהח"ע), and yodh (י), affect the pronunciation of the sheva preceding them. The allophones of the phoneme /ă/ follow these two rules:

It must be said that even though there are no special signs apart /ɛ̆/, /ă/, /ɔ̆/ to denote the full range of furtive vowels, the remaining four (/u/, /i/, /e/, /o/) are represented by simple sheva (ḥaṭaf ḥiriq (אְִ) in the Aleppo Codex is a scribal oddity and certainly not regular in Hebrew manuscripts with Tiberian vocalization).

All other cases should be treated as zero vowel (quiescent, nah), including the double final sheva (double initial sheva does not exist in this Hebrew dialect), and the sheva in the words שְׁתַּיִם /ˈʃtajim/ and שְׁנַיִם /ˈʃnajim/, read by the Tiberian Masoretes as אֶשְׁתַּיִם /ʔɛʃˈtajim/ and אֶשְׁנַיִם /ʔɛʃˈnajim/ respectively. This last case has similarities with phenomena occurring in the Samaritan pronunciation and the Phoenician language.

Depending on the school of pronunciation (and relying on musical grounds, perhaps), the metheg sign served to change some closed syllables into open ones, and therefore, changing the vowel from short to long, and the quiescent sheva, into a mobile one.

That is referenced specifically by medieval grammarians:

If one argues that the dalet of 'Mordecai' (and other letters in other words) has hatef qames, tell him, 'but this sign is only a device used by some scribes to warn that the consonants should be pronounced fully, and not slurred over'.

The names of the vowel diacritics are iconic and show some variation:

The names of the vowels are mostly taken from the form and action of the mouth in producing the various sounds, as פַּתַ֫ח opening; צֵרֵ֫י a wide parting (of the mouth), (also שֶׁ֫בֶר) breaking, parting (cf. the Arab, kasr); חִ֫ירֶק (also חִרֶק) narrow opening; ח֫וֹלֶם closing, according to others fullness, i.e. of the mouth (also מְלֹא פּוּם fullness of the mouth). קָ֫מֶץ also denotes a slighter, as שׁוּרֶק and קִבּוּץ (also קבוץ פּוּם) a firmer, compression or contraction of the mouth. Segôl (סְגוֹל bunch of grapes) takes its name from its form. So שָׁלֹשׁ נְקֻדּוֹת (three points) is another name for Qibbúṣ. Moreover the names were mostly so formed (but only later), that the sound of each vowel is heard in the first syllable (קָמֶץ for קֹמֶץ, פַּתַח for פֶּתַח, צֵרִי for צְרִי); in order to carry this out consistently some even write Sägôl, Qomeṣ-ḥatûf, Qûbbûṣ.