According to the Hebrew Bible, the tribe of Judah (שֵׁבֶט יְהוּדָה‎, Shevet Yehudah) was one of the twelve Tribes of Israel.

The Tribe of Judah, its conquests, and the centrality of its capital in Jerusalem for the worship of the god Yahweh figure prominently in the Deuteronomistic history, encompassing the books of Deuteronomy through II Kings, which most scholars agree was reduced to written form, although subject to exilic and post-exilic alterations and emendations, during the reign of the Judahist reformer Josiah from 641–609 BCE.[1]

According to the account in the Book of Joshua, following a partial conquest of Canaan by the Israelite tribes (the Jebusites still held Jerusalem),[2] Joshua allocated the land among the twelve tribes. Judah's divinely ordained portion is described in Joshua 15 as encompassing most of the southern portion of the Land of Israel, including the Negev, the Wilderness of Zin and Jerusalem. However, the consensus of modern scholars is that this conquest never occurred.[3][4][5] Other scholars point to extra-biblical references to Israel and Canaan as evidence for the potential historicity of the conquest.[6][7]

In the opening words of the Book of Judges, following the death of Joshua, the Israelites "asked the Lord" which tribe should be first to go to occupy its allotted territory, and the tribe of Judah was identified as the first tribe.[8] According to the narrative in the Book of Judges, the tribe of Judah invited the tribe of Simeon to fight with them in alliance to secure each of their allotted territories. As is the case with Joshua, most scholars do not believe that the book of Judges contains reliable history.[9][10][11]

The Book of Samuel describes God's repudiation of a monarchic line arising from the northern Tribe of Benjamin due to the sinfulness of King Saul, which was then bestowed onto the Tribe of Judah for all time in the person of King David. In Samuel's account, after the death of Saul, all the tribes other than Judah remained loyal to the House of Saul, while Judah chose David as its king. However, after the death of Ish-bosheth, Saul's son and successor to the throne of Israel, all the other Israelite tribes made David, who was then the king of Judah, king of a re-united Kingdom of Israel. The Book of Kings follows the expansion and unparalleled glory of the United Monarchy under King Solomon. A majority of scholars believe that the accounts concerning David and Solomon's territory in the "united monarchy" are exaggerated, and a minority believe that the "united monarchy" never existed at all.[12][13][14] Disagreeing with the latter view, Old Testament scholar Walter Dietrich contends that the biblical stories of circa 10th-century BCE monarchs contain a significant historical kernel and are not simply late fictions.[15]

On the accession of Rehoboam, Solomon's son, in c. 930 BCE, the ten northern tribes under the leadership of Jeroboam from the Tribe of Ephraim split from the House of David to create the Northern Kingdom in Samaria. The Book of Kings is uncompromising in its low opinion of its larger and richer neighbor to the north, and understands its conquest by Assyria in 722 BCE as divine retribution for the Kingdom's return to idolatry.[16]

The tribes of Judah and Benjamin remained loyal to the House of David. These tribes formed the Kingdom of Judah, which existed until Judah was conquered by Babylon in c. 586 BCE and the population deported.

When the Jews returned from Babylonian exile, residual tribal affiliations were abandoned, probably because of the impossibility of reestablishing previous tribal land holdings. However, the special religious roles decreed for the Levites and Kohanim were preserved, but Jerusalem became the sole place of worship and sacrifice among the returning exiles, northerners and southerners alike. 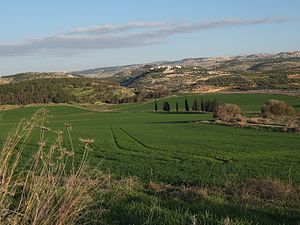 The Valley of Elah, near Adullam, in the territorial boundary of Judah

According to the biblical account, at its height, the Tribe of Judah was the leading tribe of the Kingdom of Judah, and occupied most of the territory of the kingdom, except for a small region in the north east occupied by Benjamin, and an enclave towards the south west which was occupied by Simeon. Bethlehem and Hebron were initially the main cities within the territory of the tribe.

The lion is the symbol of the Tribe of Judah. It is often represented in Jewish art, such as this sculpture outside a synagogue

The size of the territory of the tribe of Judah meant that in practice it had four distinct regions:

According to the Torah, the tribe consisted of descendants of Judah, the fourth son of Jacob and of Leah. Some Biblical scholars view this as an etiological myth created in hindsight to explain the tribe's name and connect it to the other tribes in the Israelite confederation.[17] With Leah as a matriarch, Biblical scholars regard the tribe as having been believed by the text's authors to have been part of the original Israelite confederation.[17]

Like the other tribes of the kingdom of Judah, the tribe of Judah is entirely absent from the ancient Song of Deborah, rather than present but described as unwilling to assist in the battle between Israelites and their enemy. Traditionally, this has been explained as being due to the southern kingdom being too far away to be involved in the battle, but Israel Finkelstein et al. claim the alternative explanation that the southern kingdom was simply an insignificant rural backwater at the time the poem was written.[18]

As depicted by the Deuteronomists and post-exilic writers, the tribe of Judah was the leading tribe of the Kingdom of Judah. David and the royal line belonged to the tribe, and the line continued even after the fall of the Kingdom of Judah in the Exilarchs. The traditional Jewish belief is that the (Jewish) Messiah will be of the Davidic line, based on Yahweh's promise to David of an everlasting throne for his offspring (Isaiah 9:6–7, Jeremiah 33:15–21, 2 Samuel 7:12–16, Psalms 89:35–37).

Indeed, many of the Jewish leaders and prophets of the Hebrew Bible claimed membership in the tribe of Judah. For example, the literary prophets Isaiah, Amos, Habakkuk, Joel, Micah, Obadiah, Zechariah, and Zephaniah, all belonged to the tribe. Later, during the Babylonian Exile, the Exilarchs (officially recognised community leaders) claimed Davidic lineage, and when the Exile ended, Zerubbabel (the leader of the first Jews to return to Yehud province) was also said to be of the Davidic line, as were Shealtiel (a somewhat mysterious figure) and Nehemiah (one of the earliest and most prominent Achamenid-appointed governors of Yehud). In the time of Roman rule, all the holders of the office of Nasi (prince) after Shemaiah, claimed Davidic lineage, through Hillel, who was rumoured to have maternal lineage from the Davidic line.

The Lion of Judah on the municipal emblem of Jerusalem

As part of the kingdom of Judah, the tribe of Judah survived the destruction of Israel by the Assyrians, and instead was subjected to the Babylonian captivity; when the captivity ended, the distinction between the tribes were lost in favour of a common identity. Since Simeon and Benjamin had been very much the junior partners in the Kingdom of Judah, it was Judah that gave its name to the identity—that of the Jews.

After the fall of Jerusalem, Babylonia (modern day Iraq), would become the focus of Jewish life for 1,000 years. The first Jewish communities in Babylonia started with the exile of the Tribe of Judah to Babylon by Jehoiachin in 597 BCE as well as after the destruction of the Temple in Jerusalem in 586 BCE.[19] Many more Jews migrated to Babylon in CE 135 after the Bar Kokhba revolt and in the centuries after.[19]

Ethiopia's traditions, recorded and elaborated in a 13th-century treatise, the "Kebre Negest", assert descent from a retinue of Israelites who returned with the Queen of Sheba from her visit to King Solomon in Jerusalem, by whom she had conceived the Solomonic dynasty's founder, Menelik I. Both Christian and Jewish Ethiopian tradition has it that these immigrants were mostly of the Tribes of Dan and Judah;[20] hence the Ge'ez motto Mo`a 'Anbessa Ze'imnegede Yihuda ("The Lion of the Tribe of Judah has conquered"), one of many names for Jesus of Nazareth. The phrase "The Lion of the Tribe of Judah has conquered" is also found in the Book of Revelation.