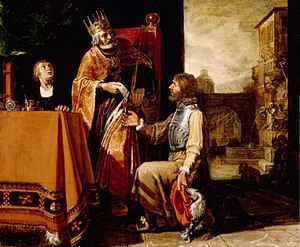 Pieter Lastman, David handing over a letter to Uriah, 1619.

Uriah the Hittite (Hebrew: אוּרִיָּה הַחִתִּי‎ – ʾŪriyyāh haḥittī) is a minor figure in the Hebrew Bible, mentioned in the Books of Samuel, an elite soldier in the army of David, king of Israel and Judah, and the husband of Bathsheba, the daughter of Eliam. While Uriah was serving in David's army abroad, David himself, from the roof of his palace, looked down on his city and spied upon Bathsheba bathing in the privacy of her courtyard. Moved by lust at the sight of her, David called for her to be brought to him and slept with her, impregnating her. In an effort to hide his misdeeds, David called Uriah home from war, hoping that he and Bathsheba would have relations and that he would be able to pass the child off as belonging to Uriah. But Uriah, being a disciplined soldier, refused to visit his wife. So David murdered him by proxy by ordering all of Uriah's comrades to abandon him in the midst of battle, so that he ended up getting killed by an opposing army. Following Uriah's death, David took Bathsheba as his eighth wife.

The name Uriah is of Hebrew origin, a theophoric name referencing Yahweh, meaning "the LORD (Yahweh) is my light."

Based on the Biblical account, Uriah was probably of the ethnic Hittite minority resident in Israel that had lived in and around the region, "the Land of Canaan", since before the time of Abraham. The Hebrews, upon their entry into Canaan, had been commanded (Deuteronomy 20:16–17) to kill "anything that breathes ... in the cities of the nations the Lord your God is giving you as an inheritance," with the explanation that "otherwise, they will teach you to follow all the detestable things they do in worshiping their gods, and you will sin against the Lord your God" (Deuteronomy 20:18). Even so, some of the earlier inhabitants were spared, in some cases for cooperating with the Hebrews (Joshua 2:12–14, 6:23, Judges 1:24–25) in other cases from failure to carry out the extermination order (Joshua 15:63, 16:10, Judges 1:19, 21, 27–36).

The era of David's rule was generations after this time, a length of time so long that by his day, many residents of non-Israelite descent who followed the Israelite religion had come to be accepted as Israelites. It is likely this included Uriah, as his name in Hebrew means "Yahweh is my light". In addition, his status as an officer in the army and as one of David's "mighty men" would indicate acceptance within the ethnic community.

The Talmud states two opinions as to who Uriah was. 1) He was a convert to Judaism.[citation needed] 2) He lived amongst Hittites and so is known as a Hittite despite his being born Jewish. (Kiddushin 76b) Either way, he was not actually part of the Hittite nation since he would have been forbidden to marry Bathsheba had he been a Gentile. 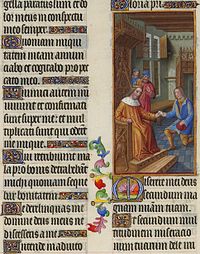 "David Entrusts a Letter to Uriah." In the Musée Condé, Chantilly.

David's mighty men were a group of his best thirty-seven fighters (later expanded to around eighty). Although the lists of his mighty men (2 Samuel 23:8–39 & 1 Chronicles 11:10–47) are given after David has become king, many of them may have been the loyal followers who stayed with him when he was fleeing King Saul. At the very least, they fought side by side with him. Uriah's closeness to David is illustrated by how closely he lived to the palace, and his position as one of the mighty men at the front battle lines allowed David to formulate and carry out his plot.

According to Second Samuel, King David was tempted upon seeing Bathsheba bathe in her courtyard from the roof of his palace. He had her brought to his chambers and had sex with her, resulting in a pregnancy. Informed that her husband was Uriah, David summoned Uriah from battle to meet him, suggesting that he go home and "wash his feet," meaning to spend time at home and attend to his wife.

Uriah refused, claiming a code of honor with his fellow warriors while they were in battle. It was common for warriors in preparation for battle to abstain from sex, as a practice of discipline. After Uriah repeatedly refused to see his wife Bathsheba, David sent him to his commanding officer Joab with a letter that ordered Joab to put Uriah on the front lines of the battle and have the other soldiers move away from him so that he would be killed by enemy soldiers.

Despite Uriah's status as one of David's mighty men, British rabbi Jonathan Magonet observes that Uriah refers to Joab, not David, as "my lord (or commander)" (2 Samuel 11:11). Joab is, Magonet notes, a kingmaker who dispatches ruthlessly his own military rivals, Abner and Amasa. He is sufficiently powerful that David, on his deathbed, advises Solomon to arrange his death (1 Kings 2:5–6). This prompts Magonet to speculate that David saw some deeper political threat from Joab through his entanglement with Uriah's wife.[1] 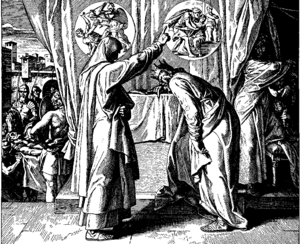 The prophet Nathan soon after confronted David about this murder, by first telling him a parable of a rich man and a poor man: The rich man had many sheep, while the poor man had only one little ewe, whom he cared for greatly. A traveler approached the rich man for food, whereby the man took the poor man's ewe and dressed it to give to the traveler.

Hearing this story, David grew angry and replied: "As surely as the Lord lives, the man who did this deserves to die! He must pay for that lamb four times over, because he did such a thing and had no pity."

Nathan replied, "You are the man! This is what the Lord, the God of Israel, says: 'I anointed you king over Israel, and I delivered you from the hand of Saul. I gave your master's house to you, and your master's wives into your arms. I gave you the house of Israel and Judah.

"And if all this had been too little, I would have given you even more. Why did you despise the word of the Lord by doing what is evil in His eyes? You struck down Uriah the Hittite with the sword and took his wife to be your own.

"You killed him with the sword of the Ammonites. Now, therefore, the sword will never depart from your house, because you despised Me and took the wife of Uriah the Hittite to be your own.'" NIV[1]

Nathan then informs David that his child with Bathsheba must die. Indeed, their first child dies after seven days. David and Bathsheba later had a second son, the future King Solomon.

All references from the JPS translation (1917) unless otherwise stated.

Uriah is portrayed in the American films David and Bathsheba (1951) by Kieron Moore, King David (1985) by James Lister and Mark Burnett's and Roma Downey's The Bible: The Epic Miniseries (2013) by Dhaffer L'Abidine.