From Biblical History & Civilization
Jump to navigation Jump to search
Not to be confused with Hezekiah.

Zedekiah[lower-alpha 1] (/ˌzɛdɪˈkaɪə/) also known as Tzidkiyahu originally called Mattanyahu or Mattaniah, was the twentieth and last king of Judah before the destruction of the kingdom by King Nebuchadnezzar II of Babylon. Zedekiah had been installed as king of Judah by Nebuchadnezzar II, king of Babylon, after a siege of Jerusalem in 597 BC, to succeed his nephew, Jehoiachin, who was overthrown as king after a reign of only three months and ten days.

William F. Albright dates the start of Zedekiah's reign to 598 BC, while E. R. Thiele gives the start in 597 BC.[1] On that reckoning, Zedekiah was born in c. 617 BC or 618 BC, being twenty-one on becoming king. Zedekiah's reign ended with the siege and fall of Jerusalem to Nebuchadnezzar II, which has been dated to 587 or 586 BC.[2]

When Babylon rose against Assyria it caused upheavals that led to the destruction of Judah. Egypt, concerned about the new threat, moved northward to support Assyria. It set on the march in 608, moving via Judah. King Josiah attempted to block the Egyptian forces, and fell mortally wounded in battle at Megiddo. Josiah's younger son Jehoahaz was chosen to succeed his father to the throne. Three months later the Egyptian pharaoh Necho, returning from the north, deposed Jehoahaz in favor of his older brother, Jehoiakim. Jehoahaz was taken back to Egypt as a captive.[3]

After the Egyptians were defeated by the Babylonians at the Battle of Carchemish in 605 BC, Nebuchadnezzar II then besieged Jerusalem. Jehoiakim changed allegiances to avoid the destruction of Jerusalem. He paid tribute from the treasury, some temple artifacts, and some of the royal family and nobility as hostages.[4] The subsequent failure of the Babylonian invasion into Egypt undermined Babylonian control of the area, and after three years, Jehoiakim switched allegiance back to the Egyptians and ceased paying the tribute to Babylon.[5] In 599 BC, Nebuchadnezzar II invaded Judah and again laid siege to Jerusalem. In 598 BC, Jehoiakim died during the siege and was succeeded by his son Jeconiah (also known as Jehoiachin). Jerusalem fell within three months. Jeconiah was deposed by Nebuchadnezzar, who installed Zedekiah, Jeconiah's uncle, in his place.[6][7] 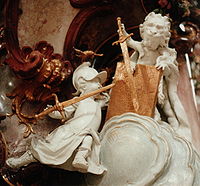 Nebuchadnezzar faces off against Zedekiah, who holds a plan of Jerusalem, in this Baroque-era depiction in Zwiefalten Abbey in Germany

According to the Hebrew Bible, Zedekiah was made king of Judah by Nebuchadnezzar II in 597 BC at the age of twenty-one. This is in agreement with a Babylonian chronicle, which states, "The seventh year: In the month Kislev the king of Akkad mustered his army and marched to Hattu. He encamped against the city of Judah and on the second day of the month Adar he captured the city (and) seized (its) king. A king of his own choice he appointed in the city (and) taking the vast tribute he brought it into Babylon."[8]

The kingdom was at that time tributary to Nebuchadnezzar II. Despite the strong remonstrances of Jeremiah, Baruch ben Neriah and his other family and advisors, as well as the example of Jehoiakim, he revolted against Babylon, and entered into an alliance with Pharaoh Hophra of Egypt. Nebuchadnezzar responded by invading Judah (2 Kings 25:1). Nebuchadnezzar began a siege of Jerusalem in December 589 BC. During this siege, which lasted about thirty months,[9] "every worst woe befell the city, which drank the cup of God's fury to the dregs" (2 Kings 25:3; Lamentations 4:4, 5, 9).

At the end of Zedekiah's eleven-year reign, Nebuchadnezzar succeeded in capturing Jerusalem. Zedekiah and his followers attempted to escape, making their way out of the city, but were captured on the plains of Jericho, and were taken to Riblah.

After the fall of Jerusalem, Nebuzaradan was sent to destroy it. The city was plundered and razed to the ground. Solomon's Temple was destroyed. Only a small number of vinedressers and husbandmen were permitted to remain in the land (Jeremiah 52:16).

Gedaliah, with a Chaldean guard stationed at Mizpah, was made governor to rule over the remnant of Judah, the Yehud Province (2 Kings 25:22–24, Jeremiah 40:6–8). On hearing this news, all the Jews that were in Moab, Ammon, Edom, and in other countries returned to Judah (Jeremiah 40:11–12). However, before long Gedaliah was assassinated, and the population that was left in the land and those that had returned fled to Egypt for safety (2 Kings 25:26, Jeremiah 43:5–7) In Egypt, they settled in Migdol, Tahpanhes, Noph, and Pathros. (Jeremiah 44:1). 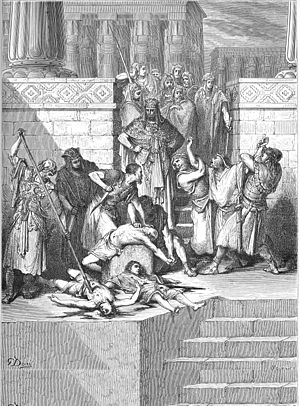 Zedekiah's sons are slaughtered before his eyes, by Gustave Doré

The Babylonian Chronicles give 2 Adar (16 March), 597 BC, as the date that Nebuchadnezzar captured Jerusalem, thus putting an end to the reign of Jehoaichin.[10] Zedekiah's installation as king by Nebuchadnezzar can therefore be firmly dated to the early spring of 597 BC. Historically there has been considerable controversy over the date when Jerusalem was captured the second time and Zedekiah's reign came to an end. There is no dispute about the month: it was the summer month of Tammuz (Jeremiah 52:6). The problem has been to determine the year. It was noted above that Albright preferred 587 BC and Thiele advocated 586 BC, and this division among scholars has persisted until the present time. If Zedekiah's years are by accession counting, whereby the year he came to the throne was considered his "zero" year and his first full year in office, 597/596, was counted as year one, Zedekiah's eleventh year, the year the city fell, would be 587/586. Since Judean regnal years were measured from Tishri in the fall, this would place the end of his reign and the capture of the city in the summer of 586 BC. Accession counting was the rule for most, but not all, of the kings of Judah, whereas "non-accession" counting was the rule for most, but not all, of the kings of Israel.[1][11]

The publication of the Babylonian Chronicles in 1956, however, gave evidence that the years of Zedekiah were measured in a non-accession sense.[citation needed] This reckoning makes year 598/597 BC, the year Zedekiah was installed by Nebuchadnezzar according to Judah's Tishri-based calendar, to be year "one," so that the fall of Jerusalem in his eleventh year would have been in year 588/587 BC, i.e. in the summer of 587 BC. The Babylonian Chronicles allow the fairly precise dating of the capture of Jehoiachin and the start of Zedekiah's reign, and they also give the accession year of Nebuchadnezzar's successor Amel-Marduk (Evil Merodach) as 562/561 BC,[citation needed] which was the 37th year of Jehoiachin's captivity according to 2 Kings 25:27. These Babylonian records related to Jehoiachin's reign are consistent with the fall of the city in 587 but not in 586, thus vindicating Albright's date.[citation needed] Nevertheless, scholars who assume that Zedekiah's reign should be calculated by accession reckoning will continue to adhere to the 586 date,[citation needed] and so the infobox contains this as an alternative.

His original name was Mattanyahu (Hebrew: מַתַּנְיָהוּ‎, Mattanyāhû, "Gift of God"; Greek: Μαθθανιας; Latin: Matthanias; traditional English: Mattaniah), but when Nebuchadnezzar II placed him on the throne as the successor to Jehoiachin, he changed his name to Zedekiah (2 Kings 24:17).